Thailand is predominantly Buddhist and home to more than 30000 temples, it is absurd if you were to visit all of them (kudos if you have checked them all). Converging the list to Bangkok itself, there are more than 100 temples, a fraction of them are frequently visited by the others, am lucky to visit at least 3 of those temples, known as wat in Thailand (and passing by a number of them on the road)

Bro Tips : Wat (วัด) is generally a term for Buddhist temples in Thailand. Other variations of the same meaning word are used in Lao, Laos (ວັດ, vad) and Khmer, Cambodia (វត្ត, woat).

As Bangkok heat can be slightly unbearable, it is advisable to wear comfortably but decently, as it is only respectful if one is dressed appropriately at the temple compounds (long pants at least below knee level, no tight fitting clothes, no revealing clothing, etc).

I started my journey from Wat Arun (also known as Temple of Dawn) because I was staying at the same side of Wat Arun from the Chao Phraya River. I got there as early as 8.15 am, and I was surprised as to why the place was quite quiet (or maybe visitors don't mind heading there in the late morning).

The intricate ceramic motives encrusting the iconic central prang (Khmer styled towers) surrounded by four satellite prang makes the Wat Arun compound an artistic attraction. It is a shame that the central prang was under renovation/construction when I visited (which is most likely why there wasn't much visitors that day).

We then took a boat ride across the Chao Phraya river (for 3 baht) to head towards two other prominent temples - Wat Pho and Wat Phra Kaew.

Bro Tips : The ticket comes along with a free bottled water

Wat Pho, one of the oldest temple in Bangkok, is known to be the home of the Reclining Buddha (representing Buddha entering into Nirvana). The gilded statue (at 15 x 46 m) is one of the largest statues in Thailand itself (impressive feat). Speaking of feet (pun mode on), do notice that the sole of the Buddha's foot has 108 panels with symbols that Buddha is associated with. 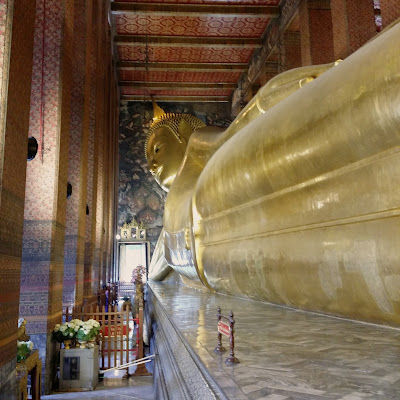 Right opposite of the statue, are 108 bronze bowls, representing 108 auspicious characters of Buddha where visitors can drop coins into them as it is believed that it will bring good fortune.

Aside from the Reclining Buddha itself, the temples also offer Thai massage courses (it is said that the temple is a revered school of traditional medicine and massage) too. Probably my next trip here I shall enrol myself into a course or two.

Bro Tips : The temple complex has much to explore as well. Among the notable attractions include
i) Phra Maha Chedi Si Rajakarn, the Four Great Chedi (Thai word for stupa, where each chedi commemorates the reigns of Rama 1 - 4 during the Chakri dynasty.
ii) Phra Ubosot, central to four phra vihara (vihara - a secluded place to walk or a Buddhist monastery) is the ordination hall for Buddhist rituals. Note the nine tiered umbrella (symbol of the authority of Thailand) over the gilded Buddha statue in this sacred building.
iii) Phra Mondob, Scripture Halls containing a library of Buddhist scriptures. 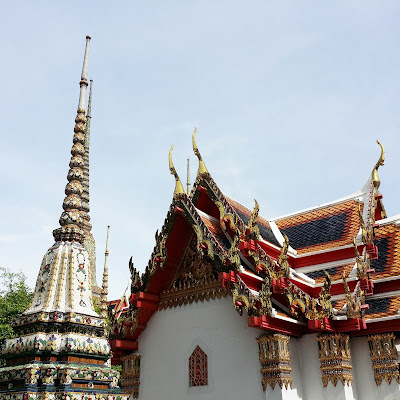 Many more historical attractions here, well, I guess you should visit this place to find out more. :)

Getting out from the Wat Pho compounds, we then traversed towards the Grand Palace, where Wat Phra Kaew is located. This place, compared to the other two temples compound that we have visited was the most swarmed (particularly from a certain Asian country known for their obnoxious travellers), which made the visit here a tad uncomfortable. 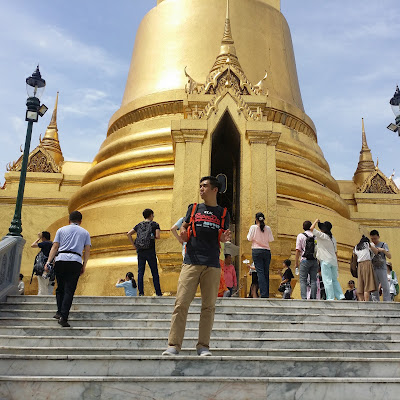 The entrance fare towards the Grand Palace and Wat Phra Kaew is significantly pricier, at for foreigners. The Royal Guards here are more stringent as well, anyone dressed indecent will be denied entry (sarong can be rented at no cost, they do take deposits though). They even have security checking for bag's contents. 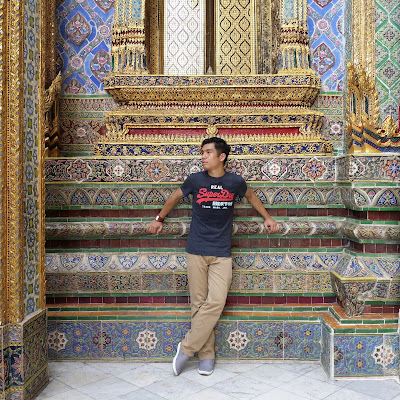 The Phra Ubosot in Wat Phra Kaew is the main reason why visitors flocked here, for the Emerald Buddha. Historical record shown that the Emerald Buddha have traveled from Chiang Rai all the way to Bangkok. The Emerald Buddha is so revered that aside from the King, no one is allowed to touch it (or photograph it for that matter). 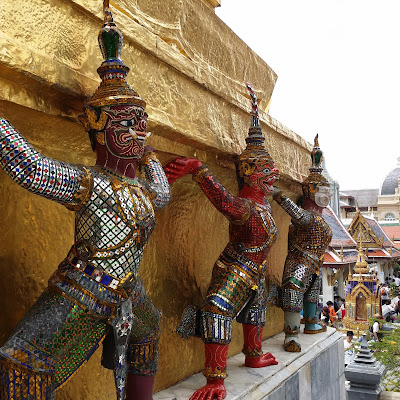 Wat Phra Kaew, the most sacred Buddhist temple in Thailand, is also the place where you can find iconic figures that pops in mind when you think of Bangkok, from the golden Phra Si Ratana Chedi to the Phra Mondop library and the ferocious yaksha , demon guardians of the temple.

As your entrance ticket also include the former residence of the King, which is the Grand Palace, do not forget to check that place out too.

Bro Tips : 1.2 km east of Grand Palace is another landmark, known as the Giant Swing, used during an old Brahmin ceremony 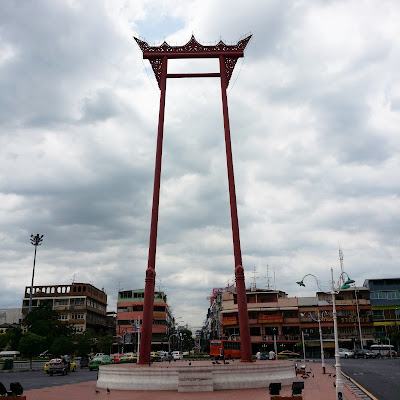