Keeping true to my annual Indonesia visit streak, I managed to snag some flight tickets to Jakarta courtesy of #OLDTOWNDestinations collaboration of Old Town Kopitiam, Tiger Air and Igersmalaysia.

While this is not my first time to Jakarta, I felt that due to work commitment, my previous trip did not do justice to experience what Jakarta truly has to offer. After the monologue debate with myself, I decided, heck, why not pay a visit to the capital of Indonesia.

Legend says that the traffic in Jakarta is a challenge for city maneuvering, I cannot argue with that fact I must say. Having landed in Soekarno Hatta International Airport in the evening (and after detouring out in Singapore by refusing to stay in the transit area for more than 7 hours), I was exhausted and I wanted to directly to head to my accommodation located around 10 minutes drive (minus the traffic congestion) from the Tugu Selamat Datang (Welcome Monument), one of the landmarks in Jakarta.

Decided against using the cab service and attempting Uber for the first time, I spent Rp 77,500 (Approximately RM 24) for a 45 minutes drive, it's definitely a wise, thrifty call.

Bro Tips : If cab is your thing anyway, do go for the Blue Bird taxi service, they are more reputable and most unlikely to short change and/or extend your travel route and meter fare.

I managed to book this service apartment room, Casa Living for RM 71 per night, I guess it is worth it due to its location and the fact that this place is relatively new.

Sundays are meant for family day, and that means most of the generic tourist attraction would normally be packed.

Bro Tips : Beware of Car Free Days on Sundays, from 0600 - 1100, where cars are cordoned off on the main avenues of the city, Jalan Sudirman and Jalan Thamrin, from Senayan area to Monas (translates - the busiest streets in Jakarta)

One of the main reason why I targeted Jakarta was that I wanted to experience the cafe scene in this bustling city, and I did managed to get to quite a number of them (in one day).

After the so called traffic embargo in the morning, I met up with a friend and he introduced me to his favorite, local Indonesian joint named Pondok Laguna, where I was introduced to several local food I've yet to tried, namely the Ayam Bumbu (Spiced Chicken) and Tahu Kipas (Tofu stuffed with Prawns and Vegetables). I am fairly certain that I am a newly appointed fan of the tahu kipas (no pun intended).

Slotted next was to one of the lesser visited, modern arts museum in Jakarta known as Art-1 New Museum or the MonDecor. This place is fairly moderate in terms of the art displays, and I guess that is one reason why this place may not draw as many crowd/visits. None the less, the space here is ample and ideal for art seminars, workshop and art appreciation (if those fancy you).

Notable landmarks in Jakarta should seal the validity of your presence here. The Tugu Selamat Datang (Welcome Monument) and Monas (National Monument) are around 10 minutes drive away from each other. The Monas is erected at the Merdeka Square, at 132m and it is a symbol of independence struggle for the people of Indonesia. There is also an observation deck open at the peak of Monas, but it is best to head there early as the crowd there can be overwhelming.

Bro Tips : If places of religion interest you, you may also visit the Istiqlal Mosque as well as the Jakarta Cathedral, a contrasting presence of two religion close to each other.

It also pays to visit the Kota Tua of Jakarta. This Old Town, also known as Oud Batavia, is inherent of its buildings with Dutch architecture facade, and it's a UNESCO heritage location. Do note the Wayang Museum, Post Office as well as Cafe Batavia, the oldest surviving cafe here. 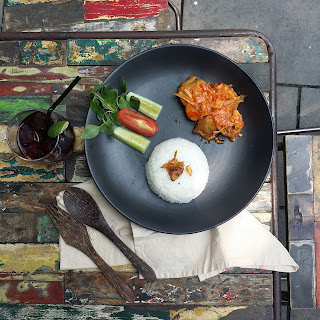 Bro Tips : For lunch or quick bite, you may drop by at Historia, reasonable priced food that serves local food and it's cafe social media worthy.

I then made my way, braving the after work rush to South Jakarta to meet up a close friend for dinner. They said if you can pronounce the food, don't eat it. The exception of course, is when you have a local friend to recommend the best of the local food (despite it being in a non-rustic place like a mall), but hey, local food savored - Checked, company of a good friend - Checked, what more I could ask for. 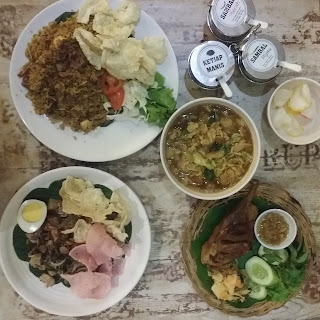 And that sums my Jakarta trip, albeit the itinerary could be tweaked to maximize my time here but I am contented enough. I'm sure to look forward to revisit Jakarta, if not any part of the greater Indonesia.