Well, it is not so much about my experience eating the burger, I can't (due to religious reason) and I won't.

Succulent looking burger, no? Too bad, I can't take beef and this was my simple response, along with other comments on that particular post.

The comment I made did not contain any racial slurs, derogatory statements, political sensitive items isn't it? I did not direct this statement to anyone, look, no names mentioned right? McDonald's Malaysia Facebook did a good job explaining their reasoning behind just promoting the beef burger.

Then this occurred in the afternoon via my Facebook messaging. 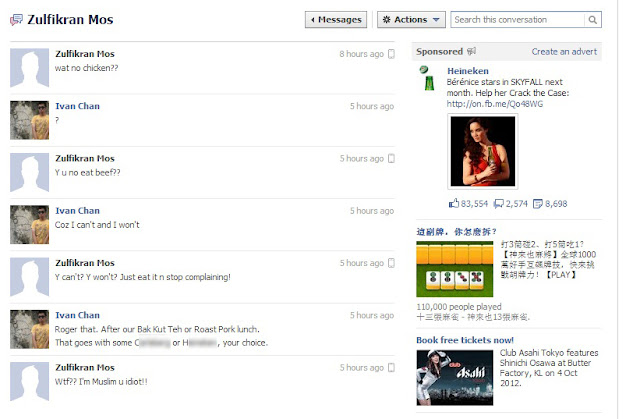 Before I could respond any further, the fella conveniently blocked me. Well, if I could continue though, this would be my response.

Disregarding your 1st and rather incomplete question, I think I have answered your second question with the shortest comprehensible way possible (note that you're a stranger to me, and I don't have any obligations to answer you whatsoever). And if you have been reading the comments on the Facebook post, you would've probably seen that I am not the only one who has been querying or responding to why there's no chicken Samurai Burger. 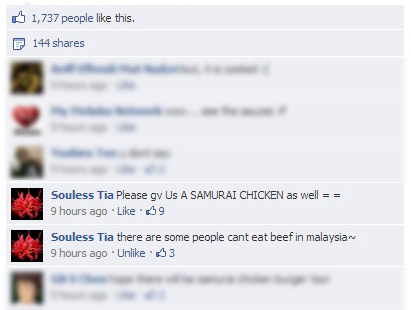 Not to patronize your education level or upbringings whatsoever, but I am pretty sure that you know that there are myriad of races in Malaysia, each of them with their particular religious restriction(s). The Hindus particularly do not take beef and certain Chinese  don't take beef either.

So when you decided to irritate me further with your smart alec respond,

I can't help but to respond sarcastically. Before you go on judging on how insensitive I am on what I typed, do note that respect goes both ways. If I am not getting an ounce of respect from you, don't even think of getting any from me. I am perfectly aware of what I typed, I know that pork and alcohol is haram for Muslims. as a humble Malaysian myself. I was about to 'return' the "Y can't? Y won't? Just eat it n stop complaining!"  statement just for you to taste the same medicine. Y U NO LET ME FURTHER RESPOND AND CONTINUE COMPLAINING? The world does not revolves around you and that sucks isn't it?

That's just my two cents. I have no problem respecting anyone as long as the respect is reciprocated.
And feel free to have a McDonald's lunch with me in the near future, just get  me a Spicy McDeluxe would do :)

Email ThisBlogThis!Share to TwitterShare to FacebookShare to Pinterest
Labels: Randomania