Day 2 : Where We Almost Meet The Queen

Nah, not really. It'll be insane if we were ever given the privilege to meet the Queen, but nonetheless Buckingham Palace was our highlight of the day. 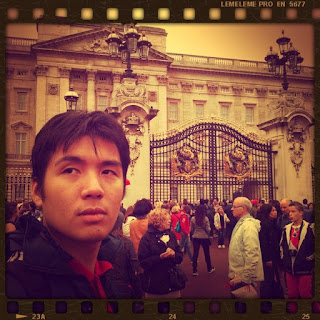 Day 2, 11th August 2011, we were trolling around bored in the airport and we decided to take the earliest bus possible to Larry's aunt's place in Colliers Wood. The possible and cheapest alternative was to take a bus and transit to Victoria Station. We took Terravision's service on that day, which costs us £ 9.00 per pax (RM45 approx). 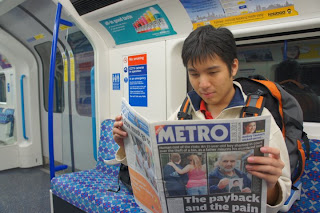 The driver is very welcoming and friendly, the enthusiasm you don't necessarily see in Malaysian bus drivers. The travel to Victoria Station, took us around 45 minutes. Throughout that ride, we were busy scanning the travel brochures again and took a quick nap, since we only managed to catch forty winks. 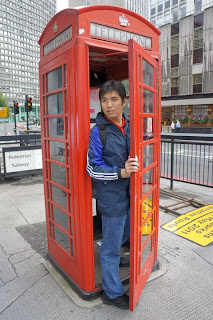 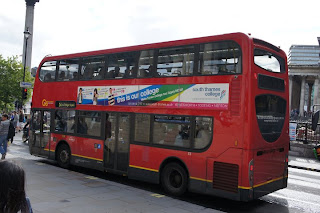 When we arrived at Victoria, we asked for the best alternative for travel, and they recommended the one day pass (around £ 8.00) rather than an Oyster Card, which functions like our Touch and Go back here. And oh, it's best to study the tube map, so we salvaged some for ourselves over at the station.

From Victoria, we took the Victoria line down to Stockwell, and interchanged to Colliers via Northern Line. The thing about the tube map, though it seems massively illustrated, it is rather easy to follow, suitable for travelers like us. 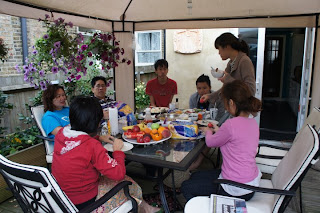 We arrived at Larry's aunt's at around 9am, and we were greeted like family (well, for Larry he is literally family). To our surprise, Larry's other aunts and uncles and cousins were there for vacation as well, it was a crowded affair in the cozy house that is crowded as it is already. 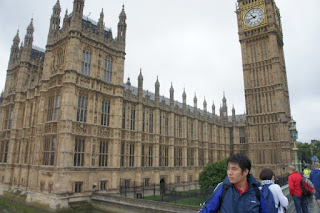 Aunt Mimi, Larry's aunt said we can travel around as we like but it is better we make it home by the night, concerned for our safety that is. 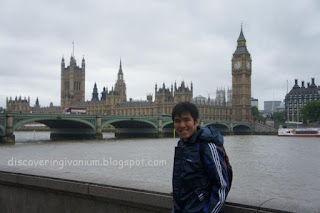 First stop, was the Parliament, London Eye and Big Ben (station to stop - Westminster) . After several camwhoring around the iconic buildings, we moved to witness the Change of Guard at the Buckingham. Needless to say, the crowd over there was overwhelming, tourists and locals flocked at this decorated event. 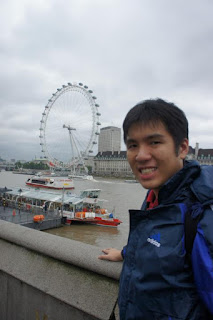 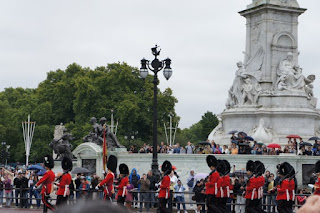 From there, we decided to visit a few more places around before dusk, such as Lily White at Picadilly Circus as I promised my brother and friends for some jersey shopping. I doubt the price are much cheaper as hyped about & I think I shopped at the wrong area for cheap jerseys. Not too sure. 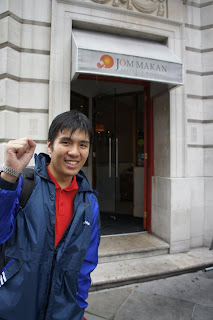 Growing up with Monopoly, it intrigues me to 'check-in' as many Monopoly locations that I can find. Yeah, Trafalgar and Leicester (assuming you don't know how to pronounce this, how would you pronounce this? :P ) Square, checked! 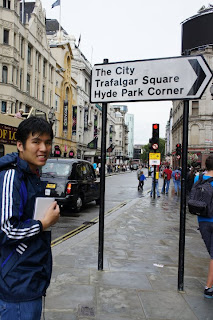 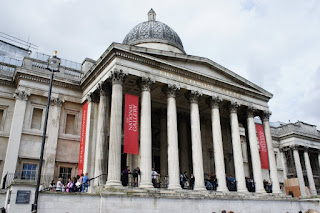 National Museum, well, I'm not a museum person, and I was pretty blank entering there, and exiting there alike. Oh well. :P

Our last pit stop for the day, was the ever so famous Harrods, via Picadilly line to Knightsbridge station. It's a departmental store probably to cater the higher end consumers, think Pavilion-ish or Parkson-ish. Not much indulgent shopping here, though my friend bought a few bags for his mom and friends. 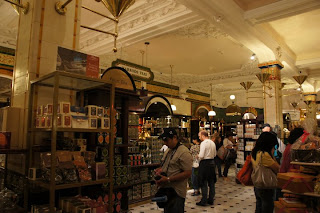 And before I forgot, STARBUCKS! A quick one before heading home :) 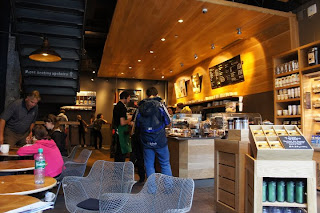 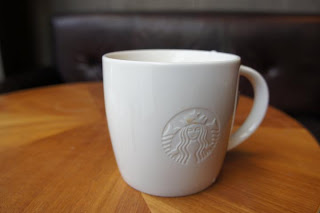 Dusk is pretty delayed here during summer as well, as we experience dark skies from 700 pm onwards, but over there the cut off time is usually around 9pm.

We called it a day, sorry that there's no happening night life to report. We reached home and had sumptuous dinner cooked by Larry's family. Oh, basically we were not shy, and ate to our heart's content. I took an early rest that night, but I was told by Larry that they celebrated the birthday of one of Larry's aunts. *paiseh* Till day 3

Teaser: And all that Jazz :D 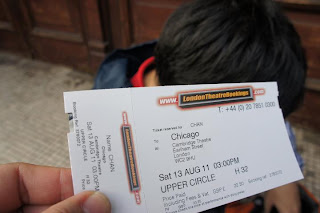 Ivan Tips
1) Daily Tube/Bus ticket, only £ 8.00 approximately and can be used to travel around central London (do check the map periodically)
2) Water is expensive there, I would suggest to get bottled water from home if you're a heavy walker especially.
3) The pigeons there are not afraid much of humans. Hoho... but it is a public offense if we publicly feed them at certain areas. 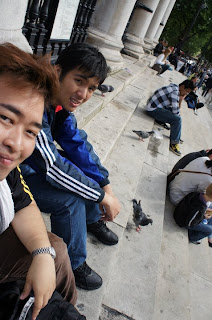 After much persuasion from my friend Larry, I was convinced and hence, there I was in Europe, and attended the World Youth Day held in Spain and side traveled to London and Paris. Took unpaid leave to travel, but I was paid handsomely in many ways in return through the experience gained over there.

We did extensive homework, from travel routes, prices, accommodation 6 months prior the travel date. The research was necessary, since we are literally foreign to our travel area. 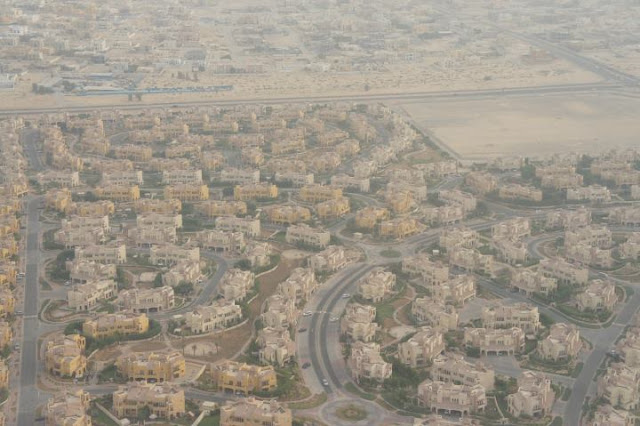 It was the 10th of August 2011, first stop, London! Thanks to Airasia X, we took a 13 hour flight (and made a quick stop in Abu Dhabi for refueling) to our destination. 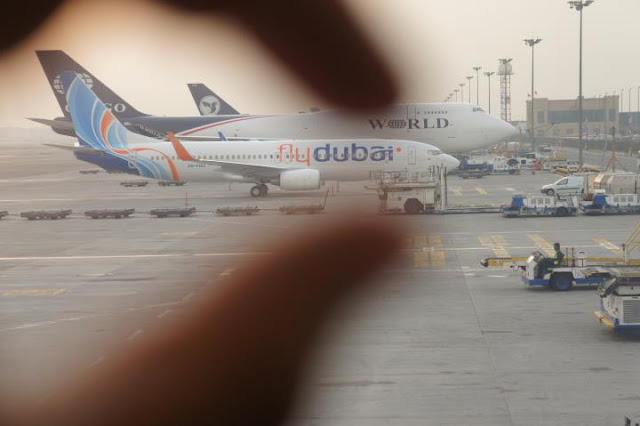 Bro tips, while in the plane, there's not much you can do. Do walk or move your feet often, as it helps prevents deep vein thromboses, the trolling blood clots form deep inside the legs. Also, the air is dry above, keep hydrated and you can do facial masks as well. Trust me, everyone will have the same dulan face during long flights, you don't have stay vain that long.

Had an inflight food, chicken chop or something like that, not exactly the best of meals I had but it is sufficient to survive. 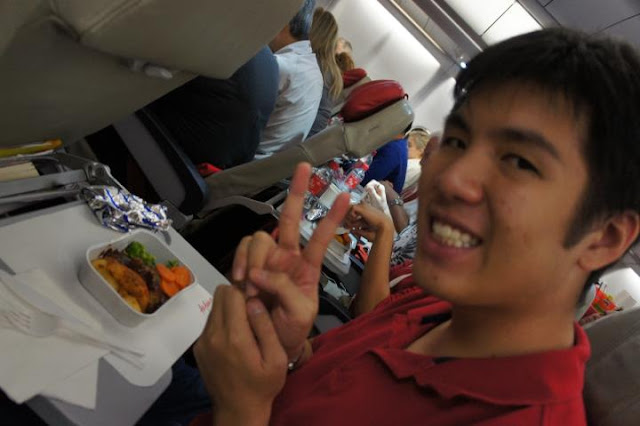 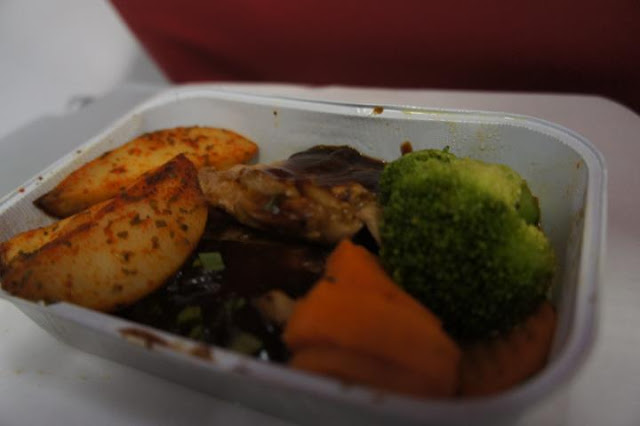 We arrived at 10pm approximately at London time, Stansted Airport. Due to the recent riots at the time of our travel, we were advised to stay at the airport and not to travel around during the night. Larry has an aunt staying in London, and we were lucky that we were allowed to bunk in at their place, that helped us saved much! Their place is in Colliers Wood, and to travel there we needed to take the tube and bus, much of a transit journey. 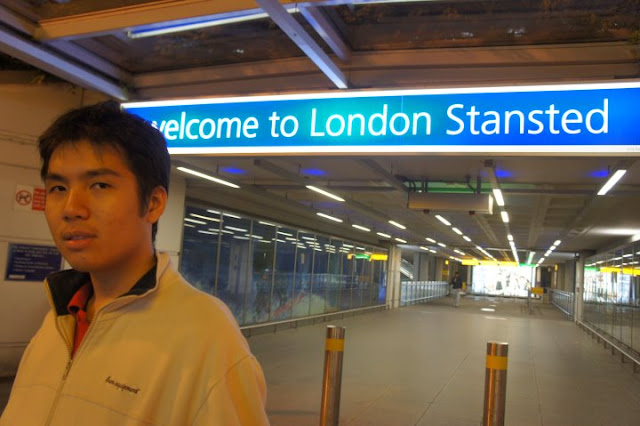 And so, we camped at the airport for the night. Internet is expensive there, I would suggest finding somewhere with free WiFi the whole night, if you're an Internet junkie. Till Day 2!

Ivan's Footnotes:
1) Flight expenses : RM2740 (to and fro) from LCCT to Stansted, AirAsia X
2) London is 8 hours behind Malaysia (GMT 0000)
3) Stay hydrated!
4) Check for the local weather before traveling. Summer over in London is much like Genting's weather.
5) Keep your family members/loved ones/the ones who care posted. Get a local number. Post on their Facebook. Text! Let them know your whereabouts as frequent as you can.

Day 2 : Where We Almost Met The Queen
Day 3-4 - Travesting Covent Garden and More
Day 5-6 - Wembley, Wimbledon and Windsor
Posted by Unknown at 10:51 AM 6 comments:

Ten seconds to read my dedication of love bound.
Cloud Nine is what I feel with you around.
A fallen Eight, is how long I'll fall for you.
For you, I'll brave the Seven seas too!
Six letters in Beauty, graces with your presence
Five senses of mine crumbles with your absence,

Four seasons rotates, my feeling's remains unfazed.
Three's a delighted crowd, us and love amazed.
Two souls united, look what fate brought us through?
One true love is all I need, and I have you.
Posted by Unknown at 11:24 AM 4 comments: