You might be thinking, how long do I need to cover the Angkor Archaeological Park, and subsequently what is the admission period like for that long of a period. Passes are sold in one-day ($20), three-days ($40) and seven-days ($60) combo to be used on consecutive days. Wait up... seven-days? Unless you are spending 2 weeks to a month in Siem Reap, I doubt the seven-days pass would be worth it. Three-days pass is more feasible BUT if you're following the same packed itinerary I had, then a day pass would be sufficient. 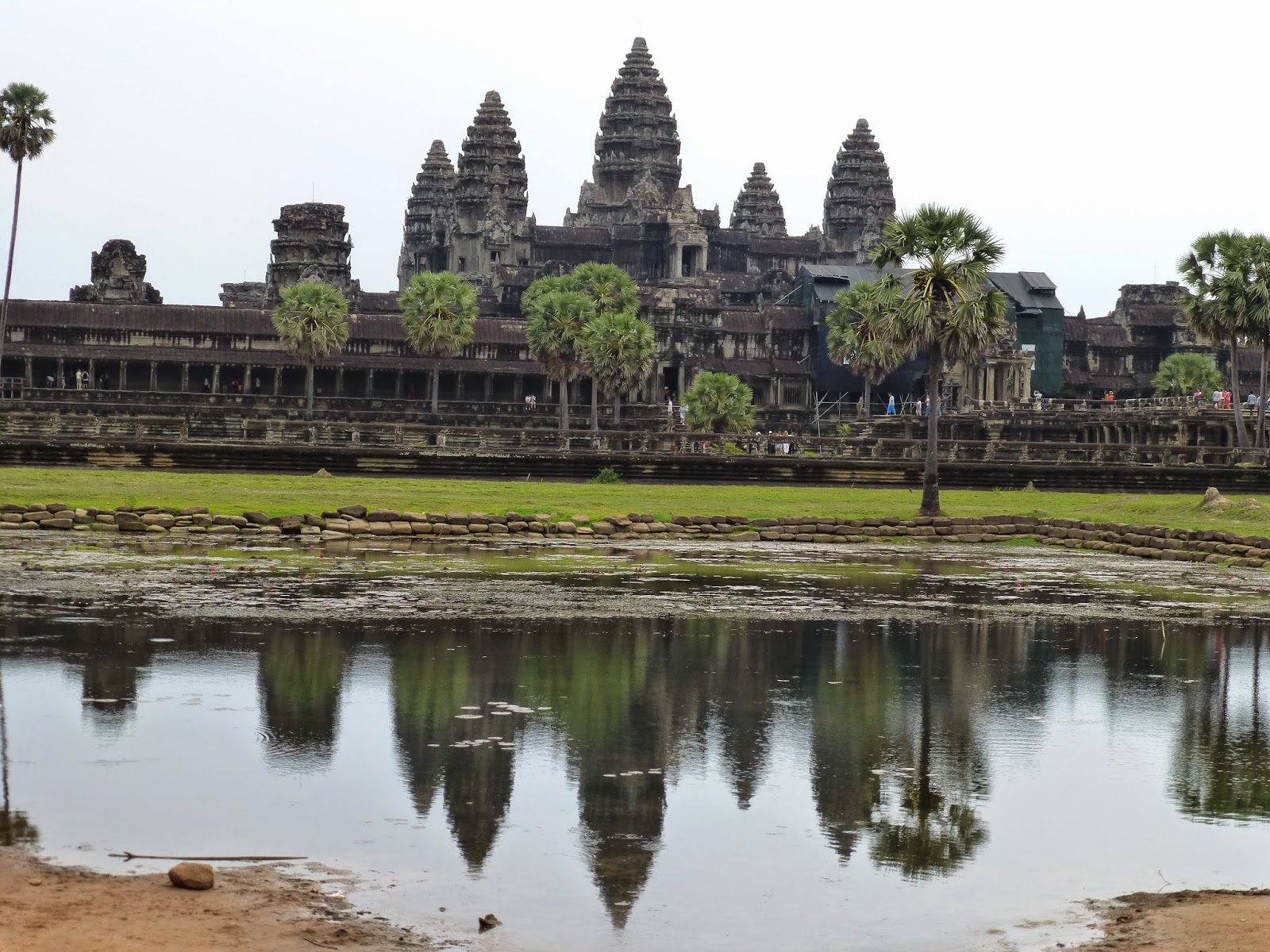 We had pre-arranged a personal tuk-tuk driver for a day, and for all its worth, I do think it is better to get a secured driver ahead of time. Our driver was Mr.Borin, you can get his contact here. He charged only $20 for a whole day trip, and he provided us with cold water that sustained us throughout the day. It does save you time looking for another driver to take you from a spot in another in the park (and mind you, the park itself is HUGE). We opted for a day pass naturally, and by paying $20, we get a personalized pass which has to be shown upon entrance of the temples around the park.


Another debatable decision to make when you visit Angkor, to sunrise or not to sunrise? If you are a shutterbug, then it is worth waking up early (and by early, I mean like 4a.m. or so) and get yourself to Angkor Wat (the mainstream tourist destination for sunrise) OR opt for Phnom Bakheng instead (you may switch between those two for sunset as well). We reached there around 5-ish and it was already kind of bright for sunrise, oh well.


If you're on a time crunch (aka only having a day in Angkor), the following route may be suitable for you to follow.

1) Start your day in Angkor Wat

Angkor Wat (អង្គរវត្ត) was first a Hindu, then subsequently a Buddhist, temple complex in Siem Reap, Cambodia. Also the largest religious monument in the world, this temple was built by the King Suryavarman II in the early 12th century as his state temple and eventual mausoleum. Breaking from the Shaivism tradition of previous kings, Angkor Wat was instead dedicated to Vishnu. Angkor Wat is Cambodia's most iconic places of interest (you may also recognize this magnificent architecture on the national flag of Cambodia). 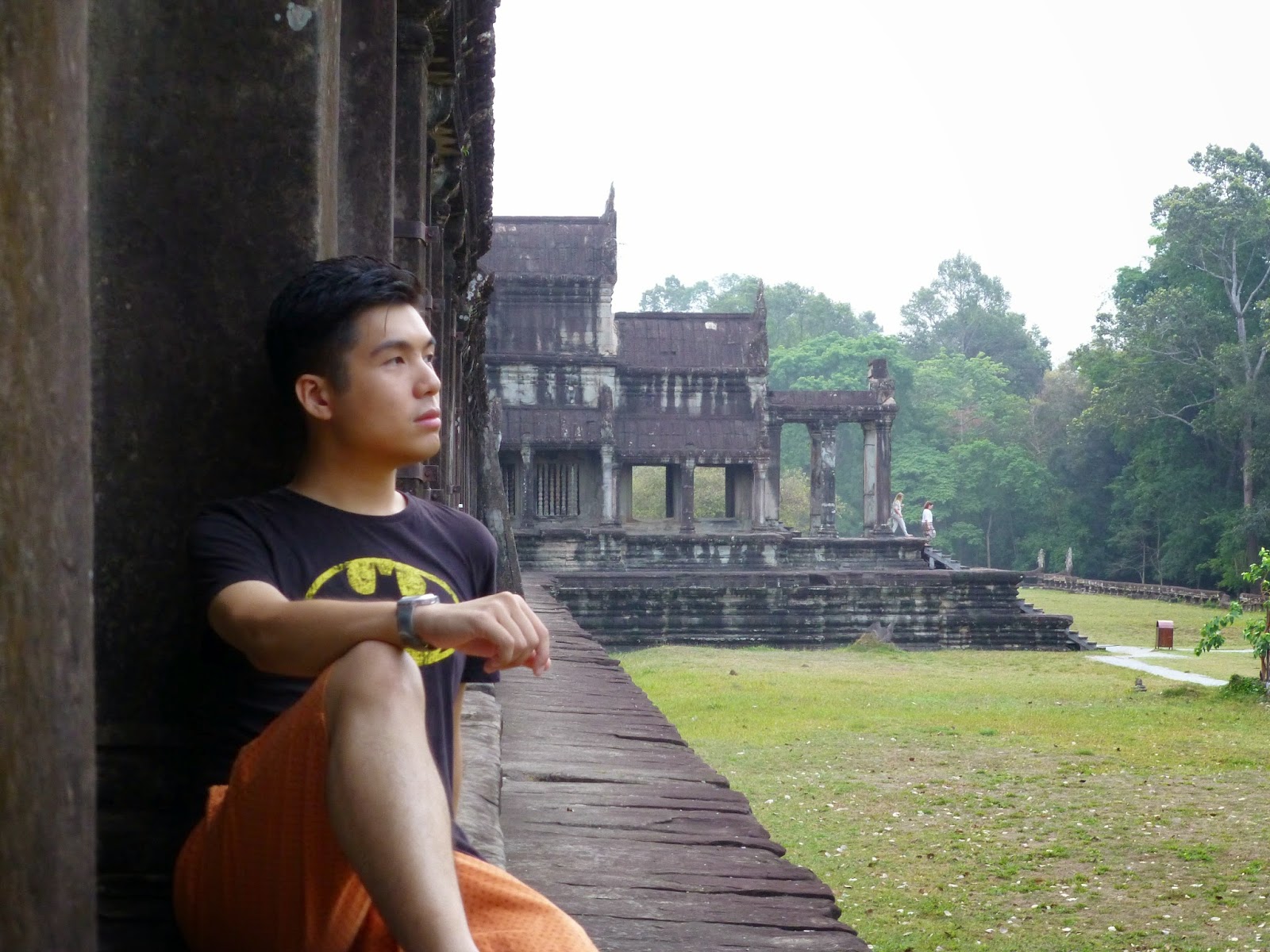 Ideally, tourists and locals alike flocks here to catch the sunrise, but if you can't catch it, it is not the end of the world. Before the crowd starts to build up, do yourself a favour and marvel to the sculptures and carvings on the wall while getting your shutterbug modes on. We did not have a tour guide, so we did not get a guided route and explanations on the site, but none the less, the sights itself was enough to captivate our full admiration. 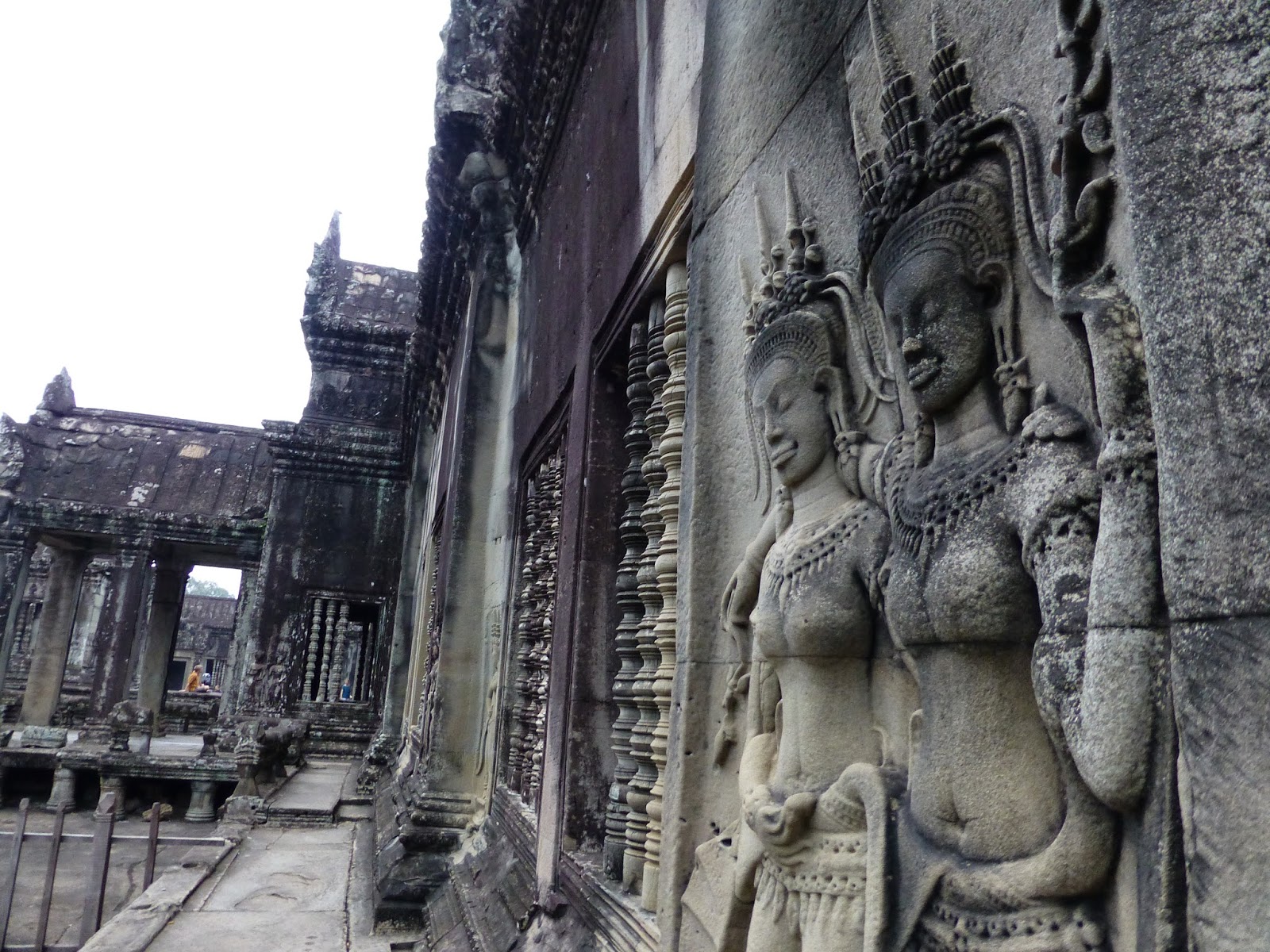 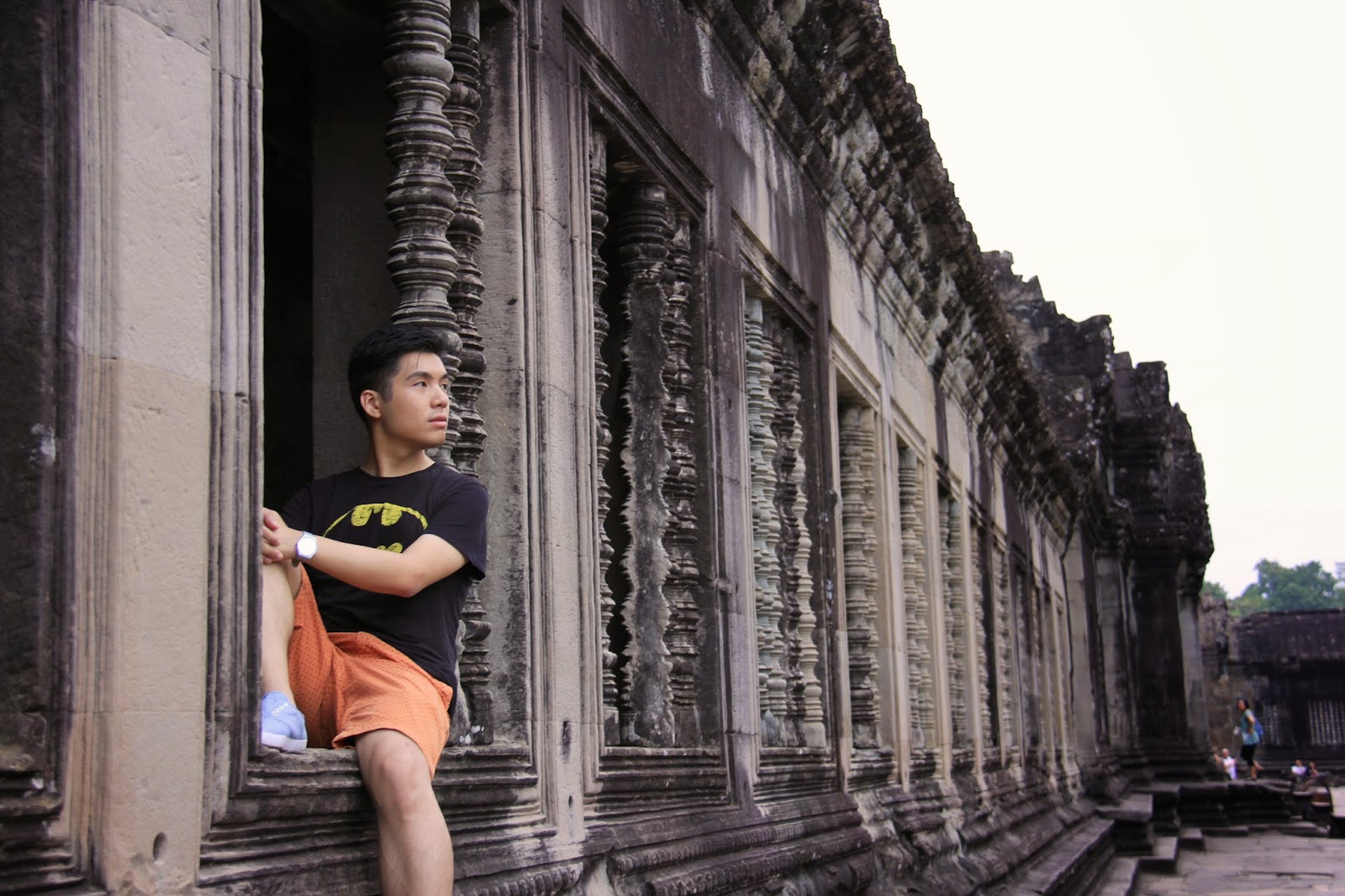 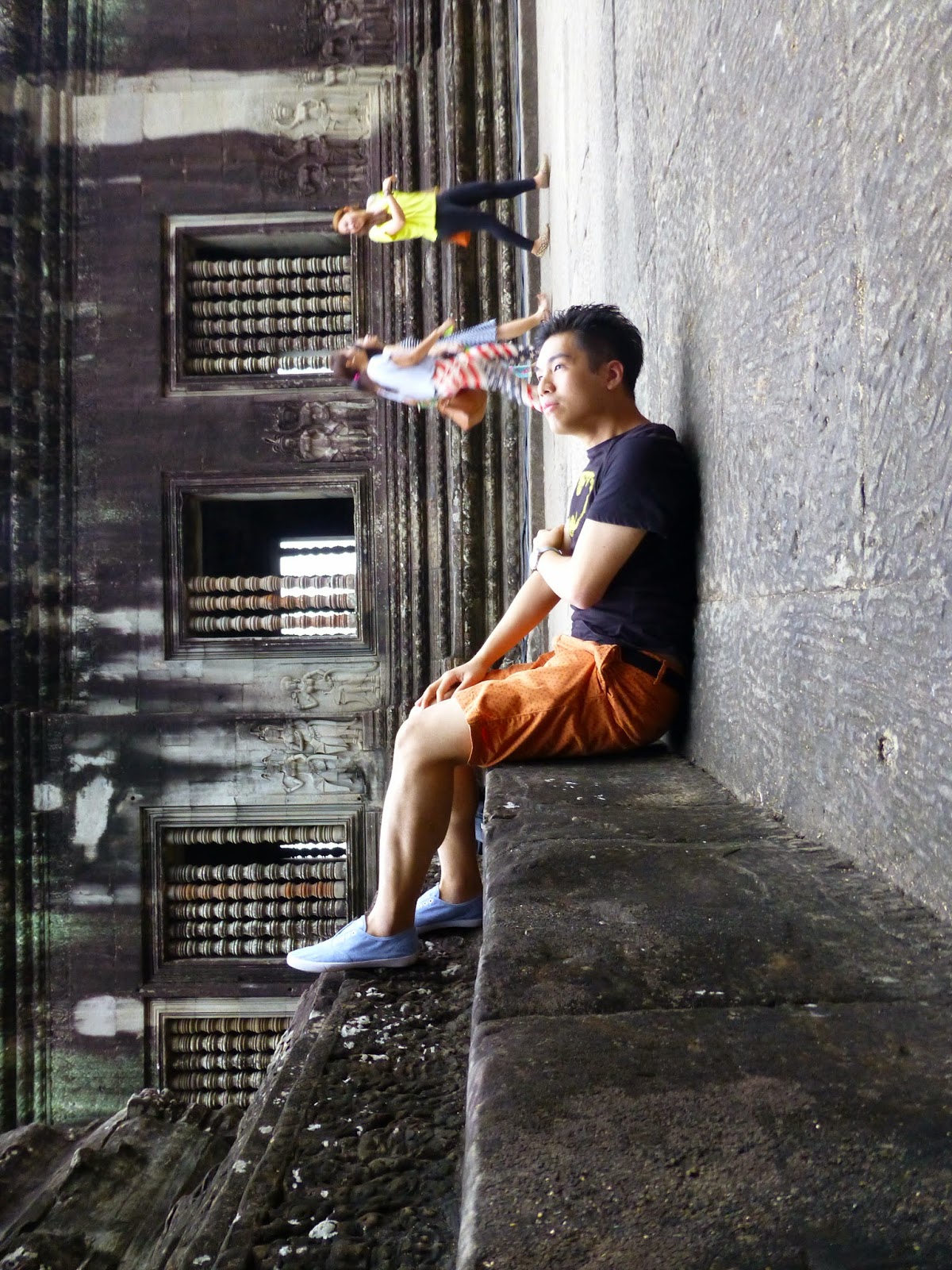 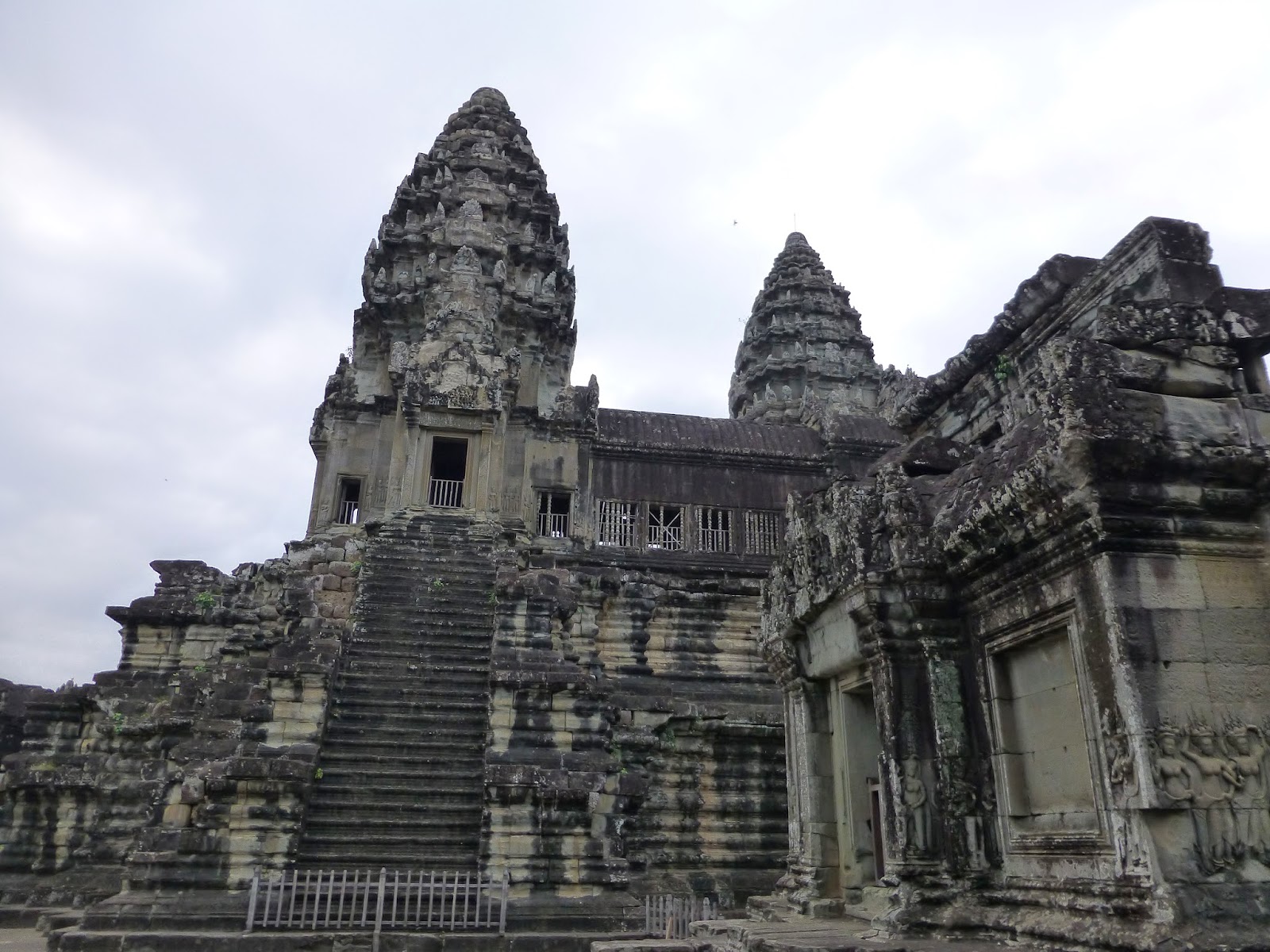 You would start your Angkor journey from the main entrance at the West.

(BRO TIPS : There will be a LOT of seemingly legit locals with incense/joss sticks who would approach you and encourage you to place the incense near the Buddha statues for good luck, for a sum. My advice, AVOID eye contact with them and move along, if you're planning to save your bucks.) 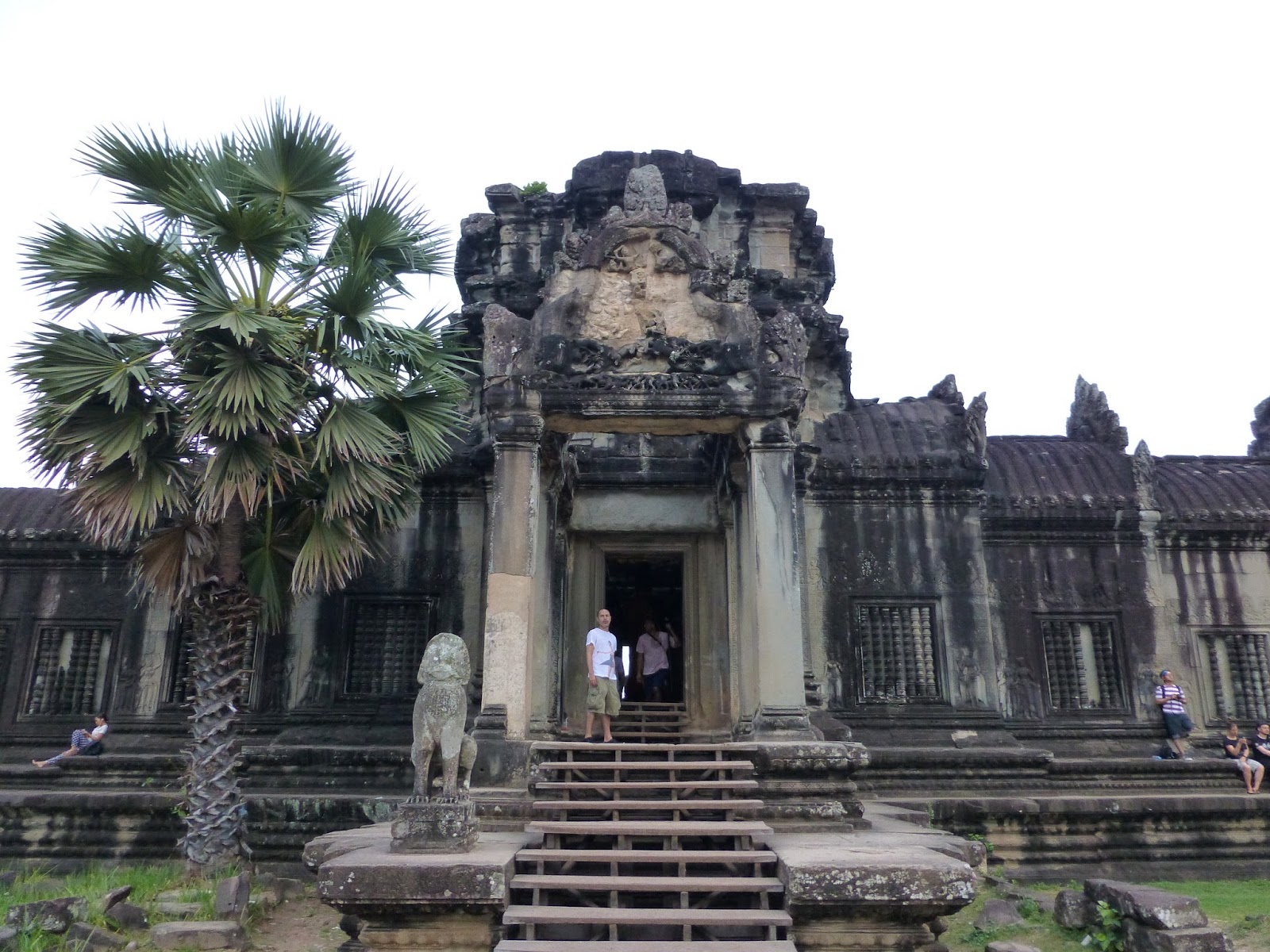 Walk along the lower premise before ascending to the Bakan, the inner gallery which requires some climbing (here on forward, proper attire had to be adhered, as there are guards over there to screen the visitors ascending). From here you would be able to have a good overview as well overseeing Angkor Wat from it's built peak. 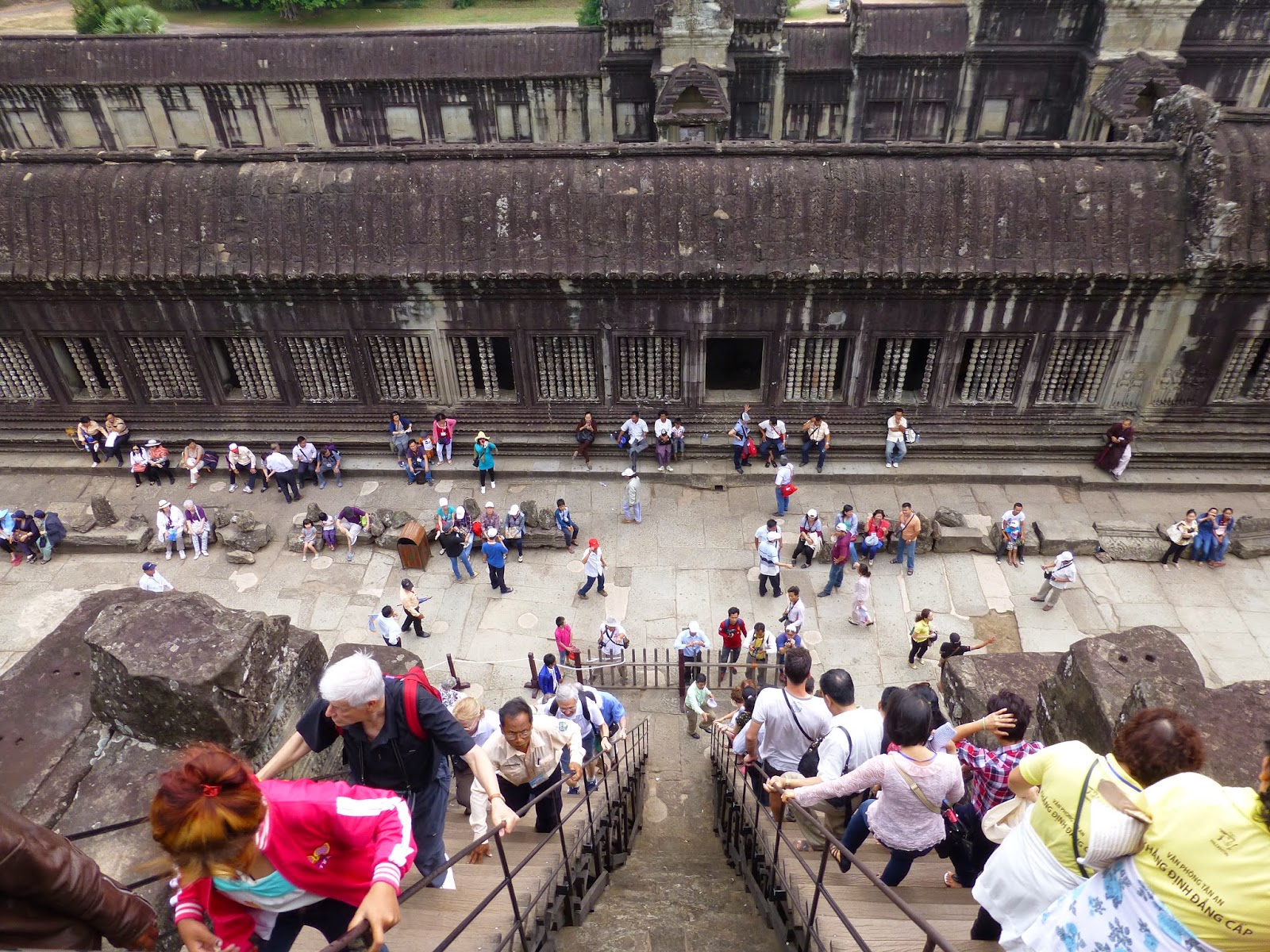 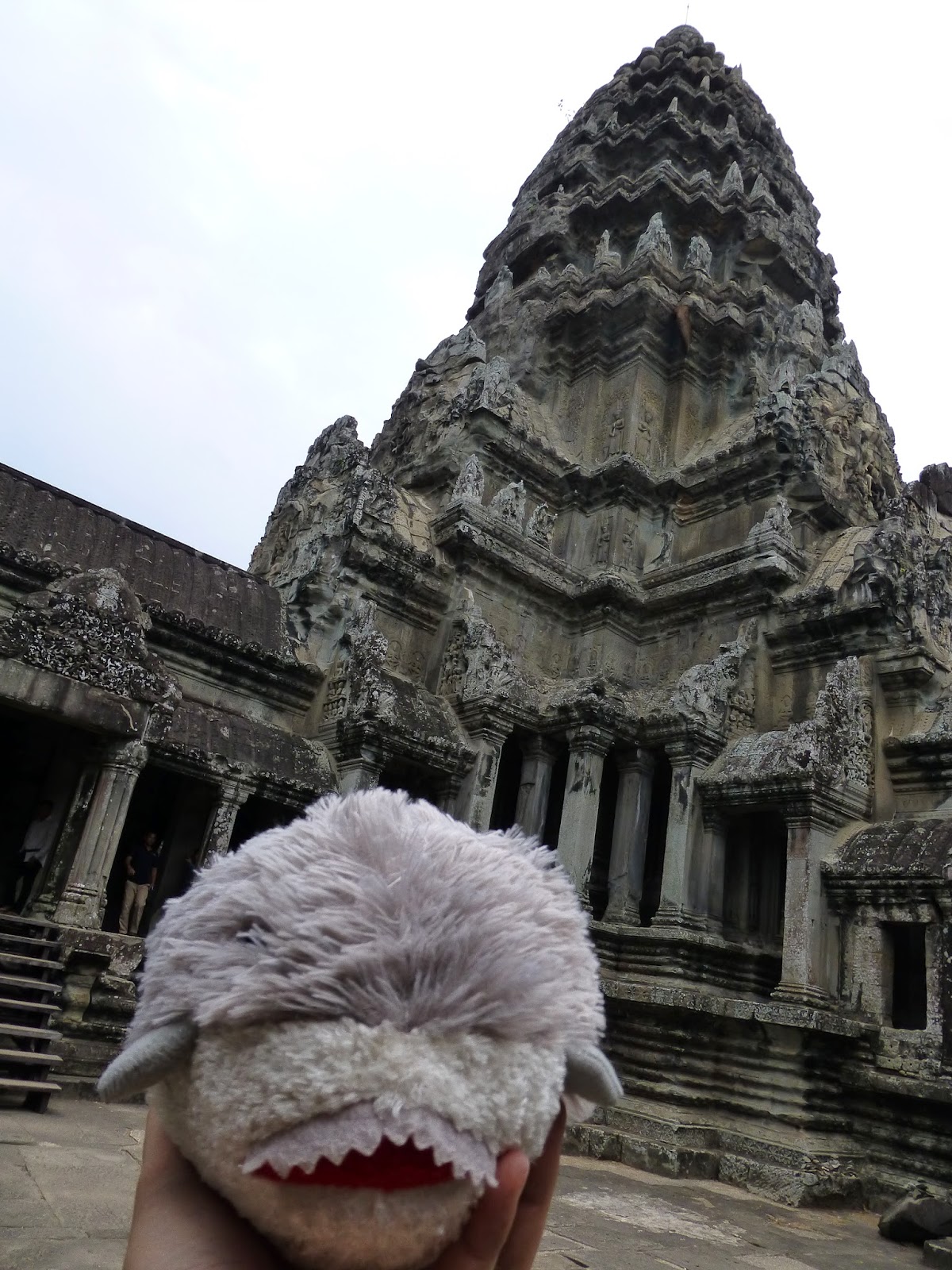 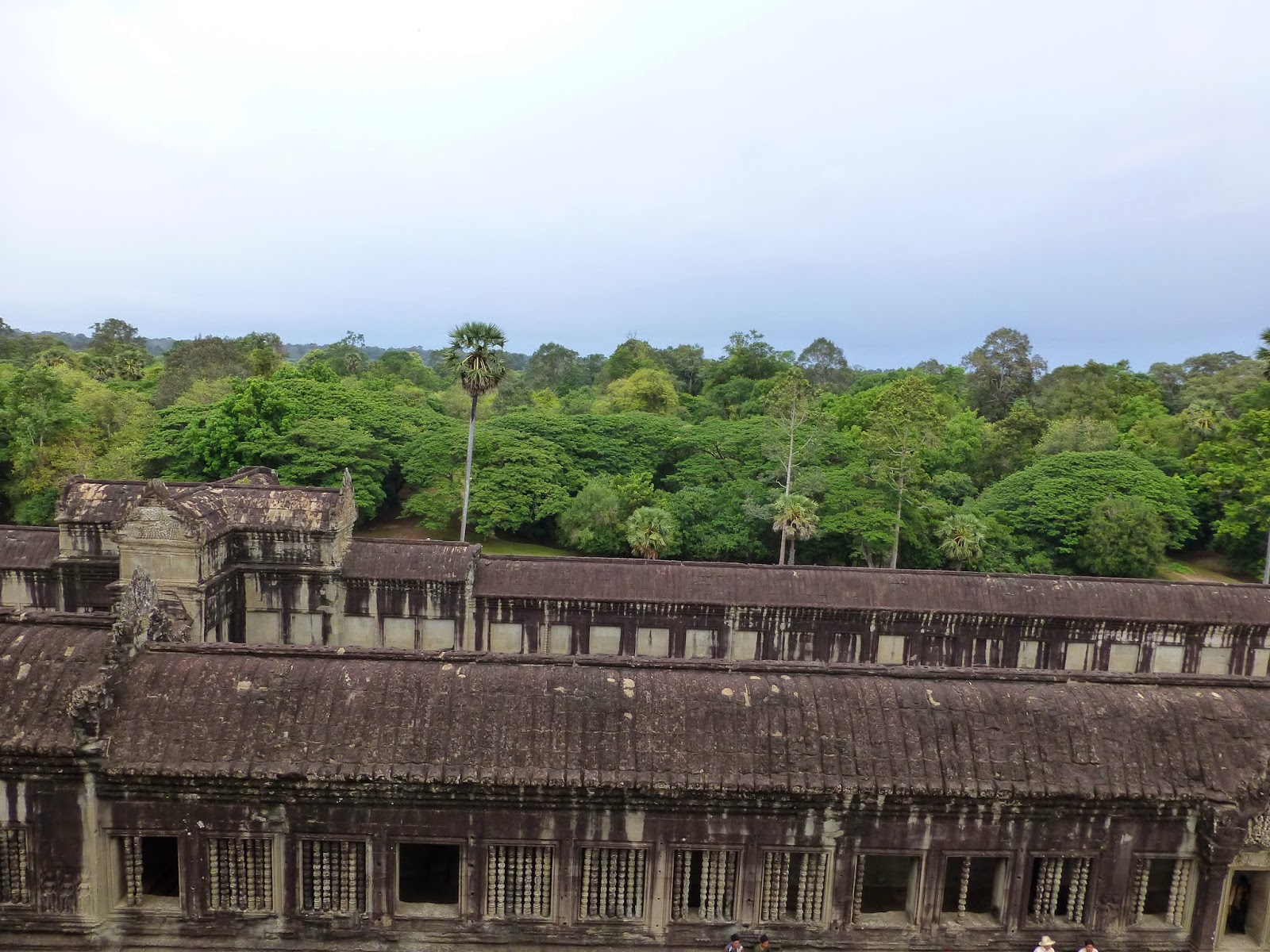 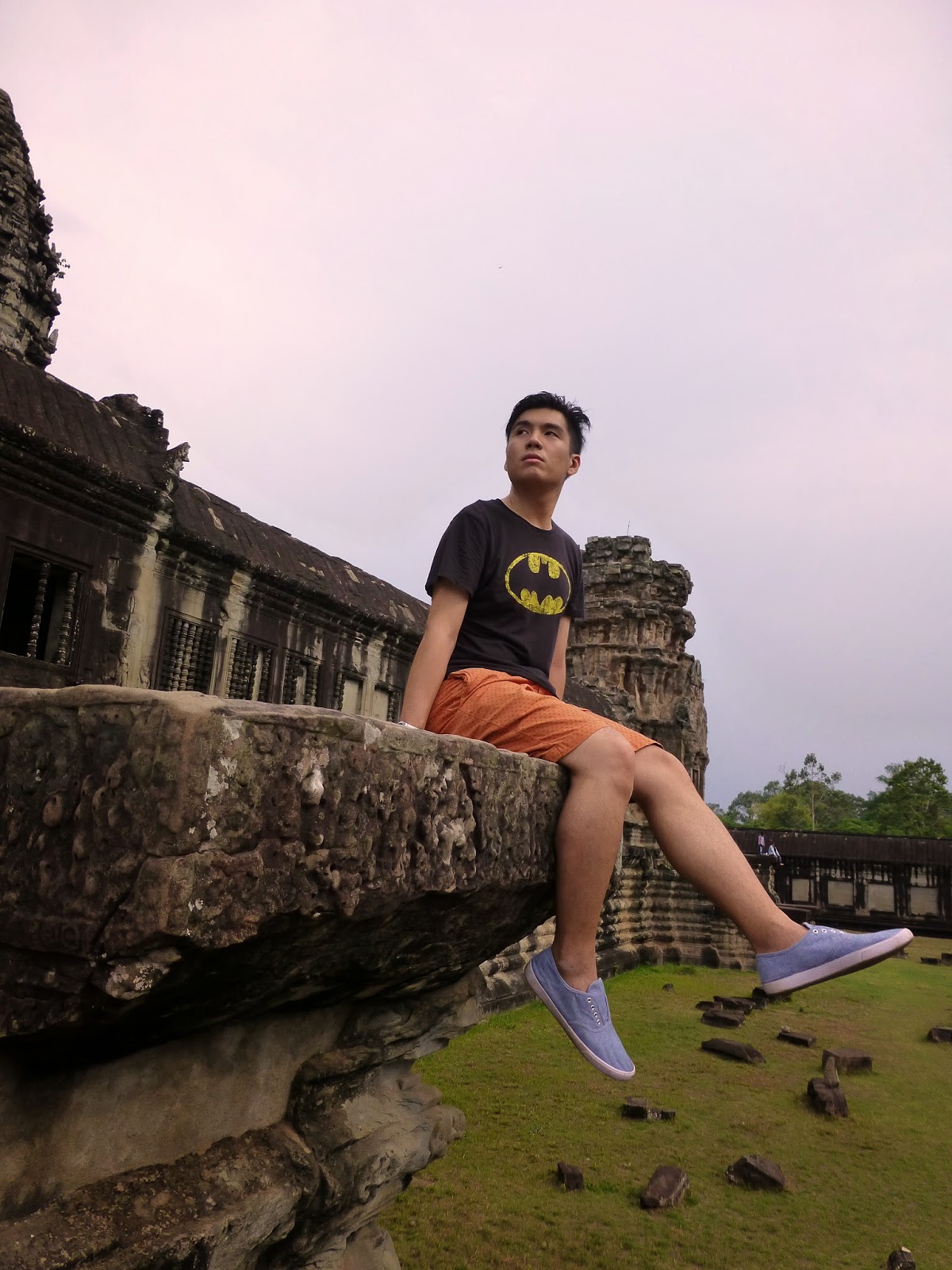 2) The faces of Bayon

After spending a good 3 hours in Angkor Wat, we moved on to Bayon (ប្រាសាទបាយ័ន, Prasat Bayon) , essentially located in the center of Angkor Thom. Bayon, the official state temple of Mahayana Buddhist King Jayavarman VII was built around the 12th-13th century. You wouldn't miss the impressive carving features of the faces here. 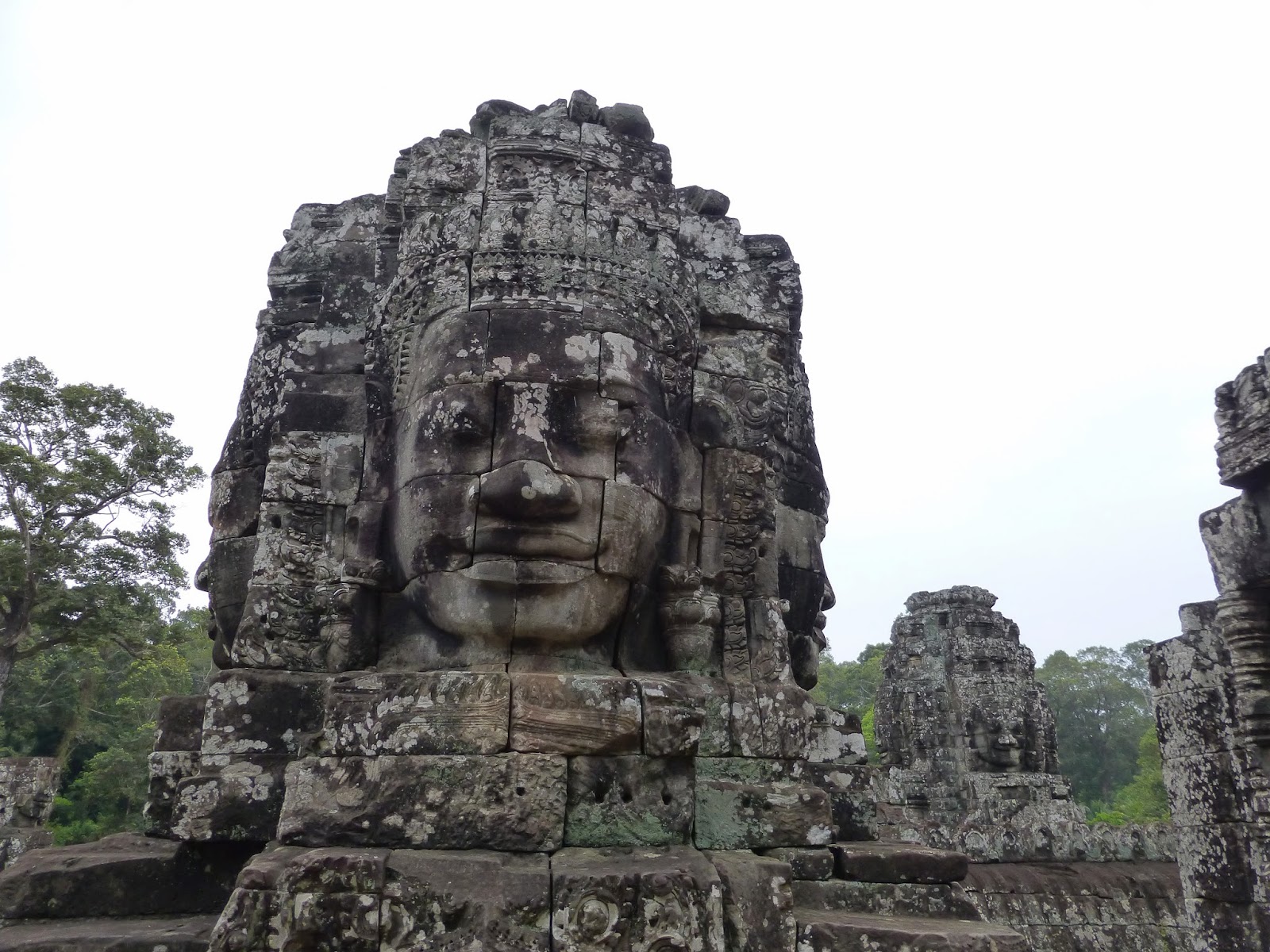 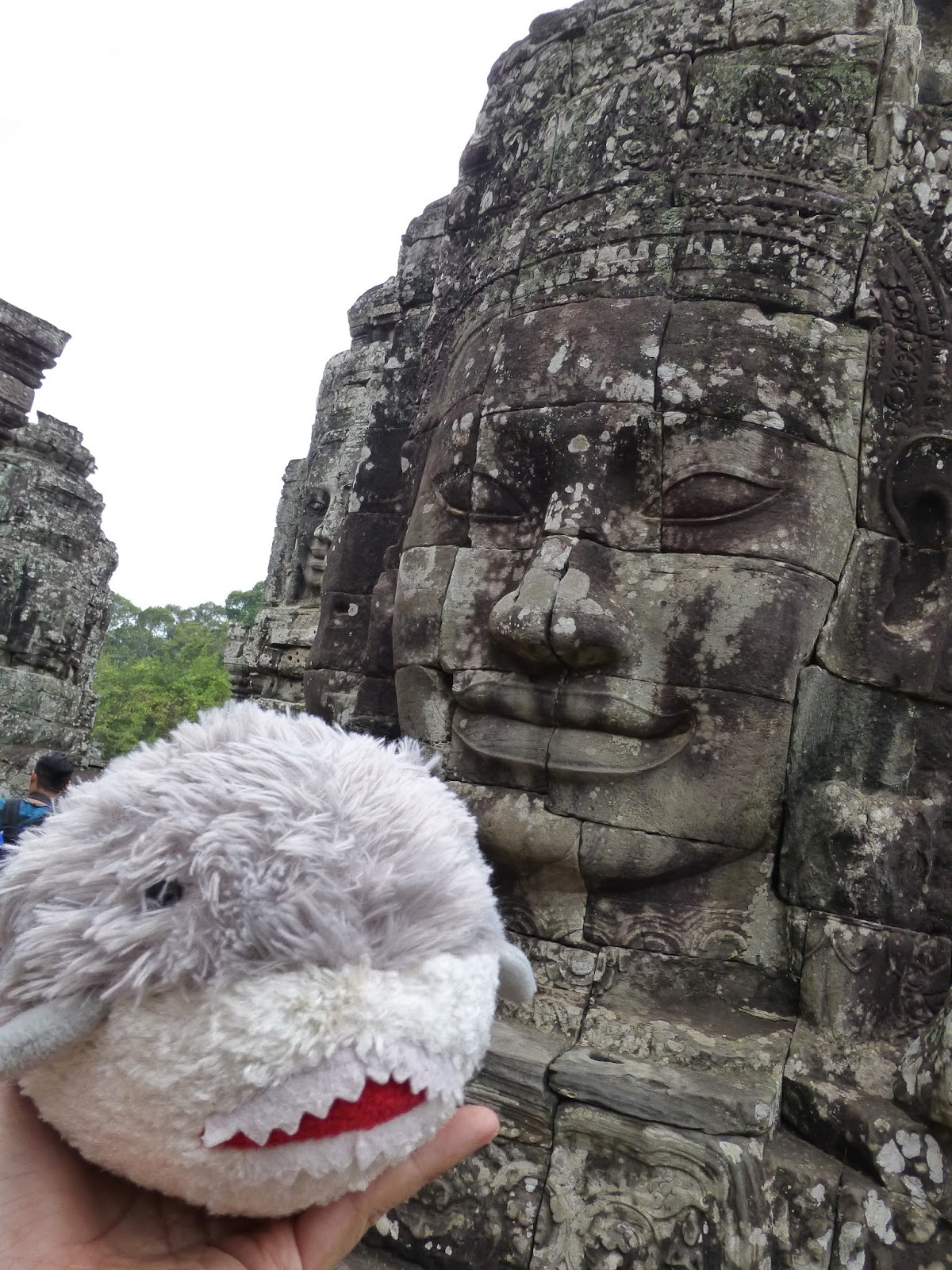 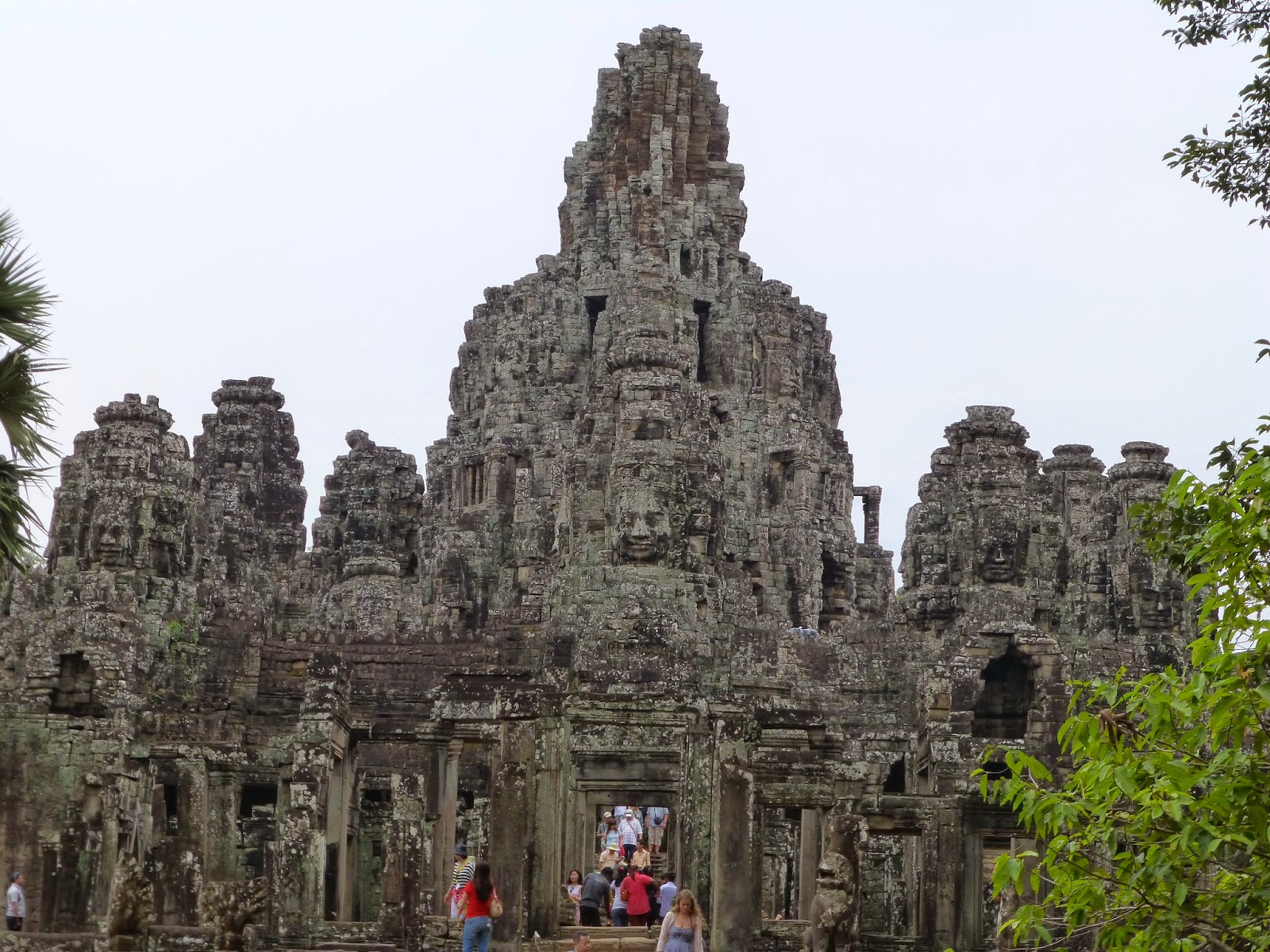 The Baphuon (ប្រាសាទបាពួន), located at northwest of the Bayon was our next stop. Built in the mid-11th century, it is a three-tiered temple mountain built as the state temple of Udayadityavarman II dedicated to the Hindu God Shiva. Baphuon is relatively quieter than the its more famous counterparts in Angkor Thom, but it was still a very photogenic location non the less. Noticeable features includes the waist height pillars at the base of Baphuon and the uniform frames on its peak. 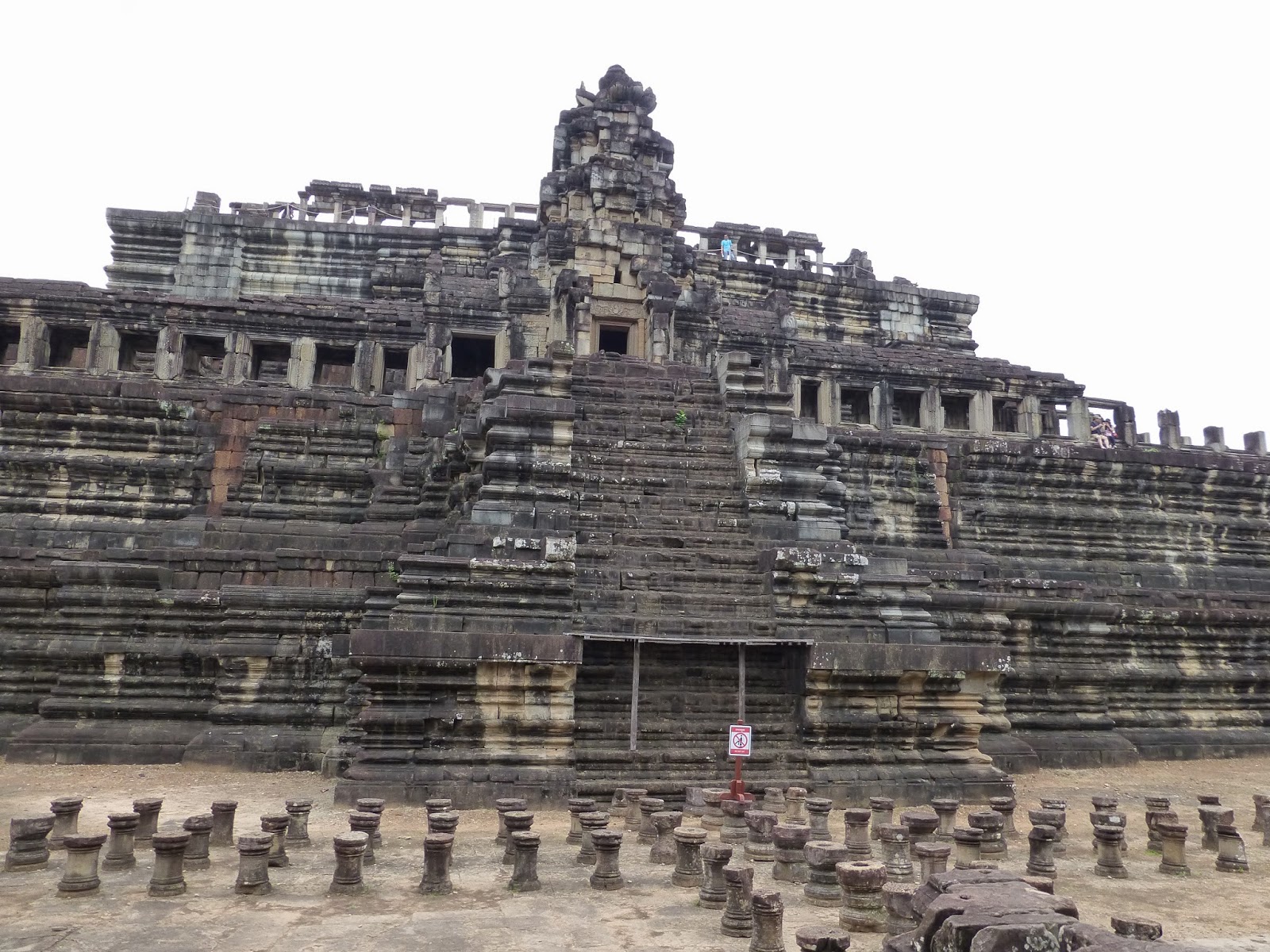 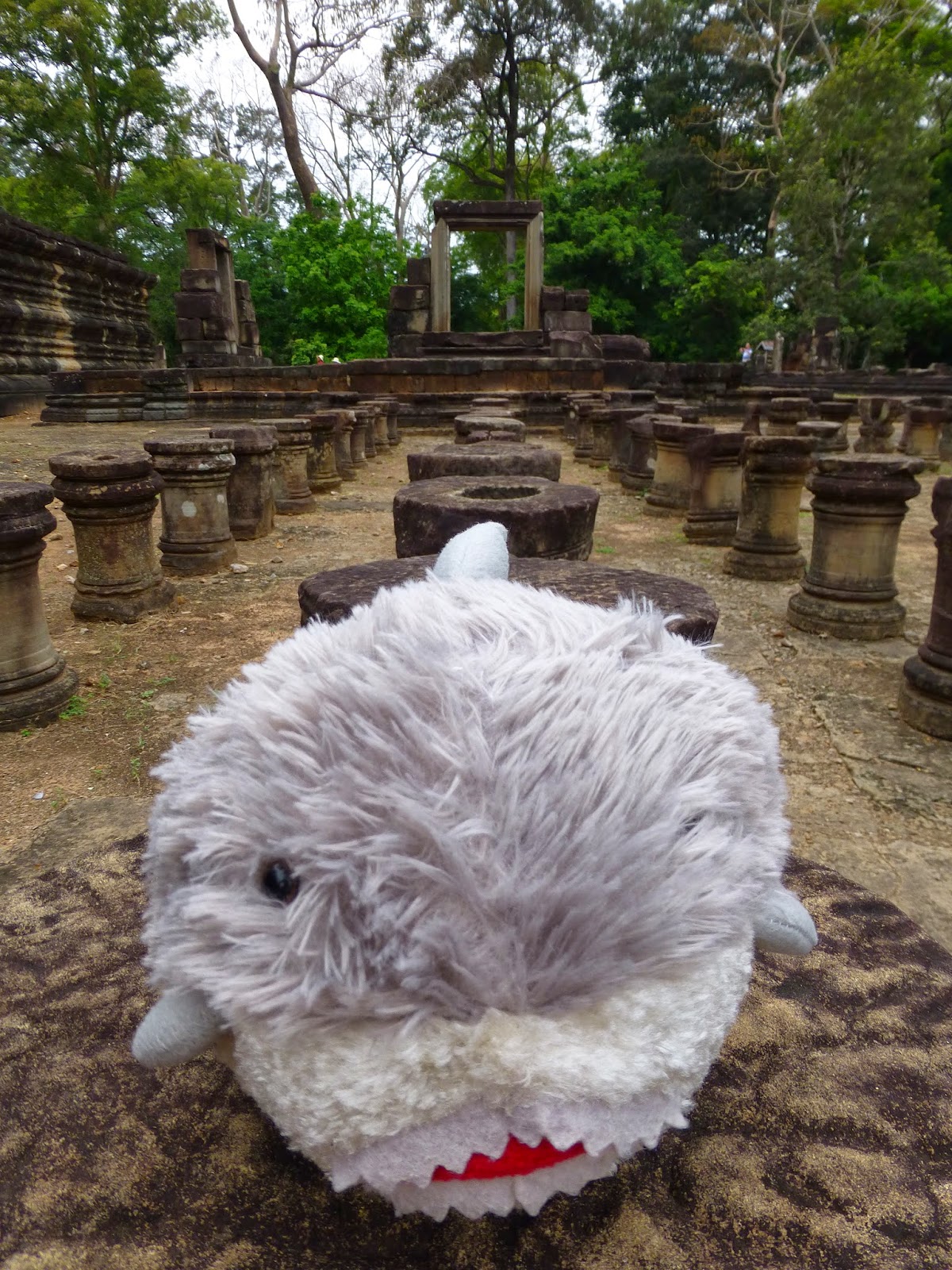 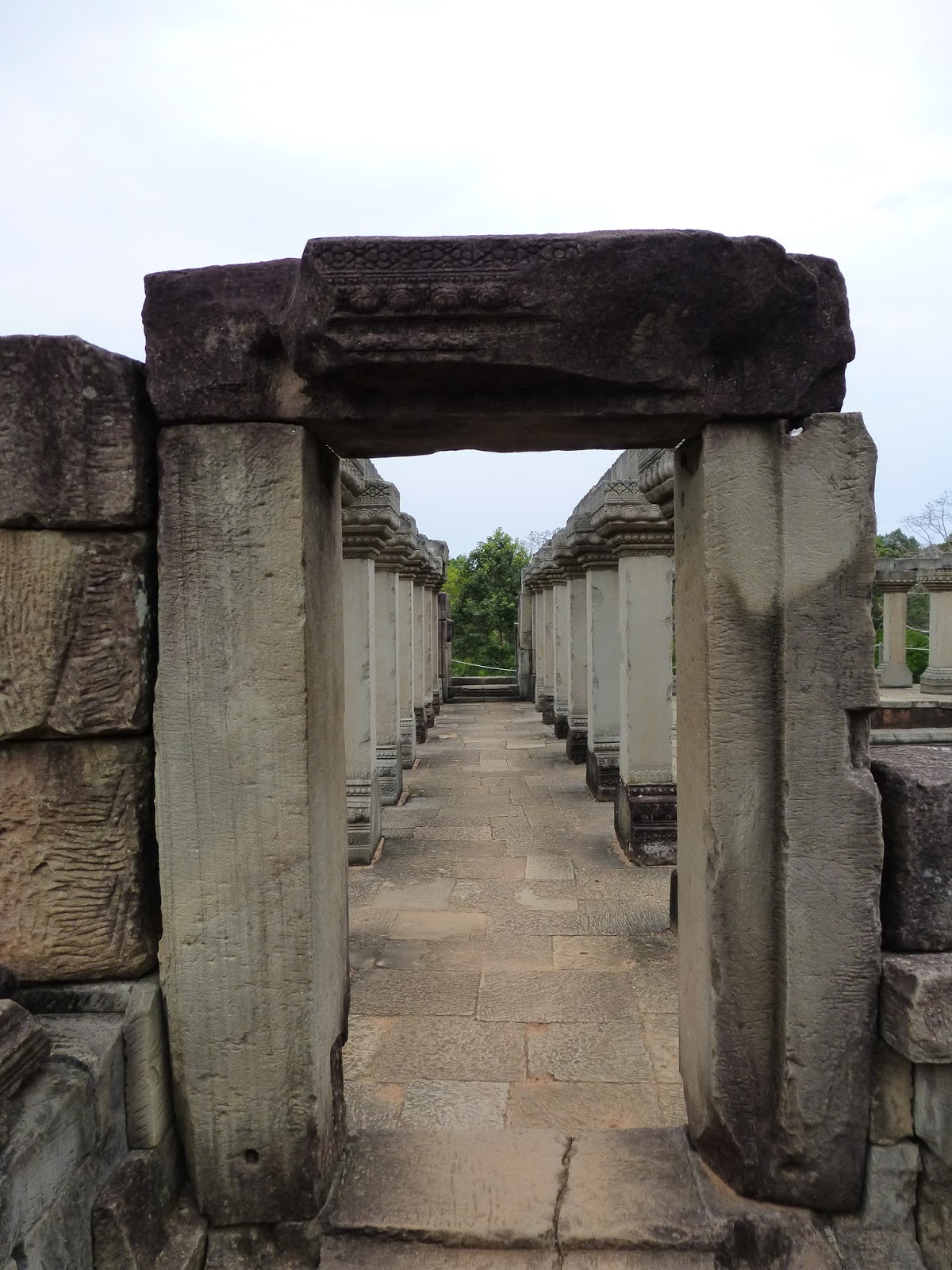 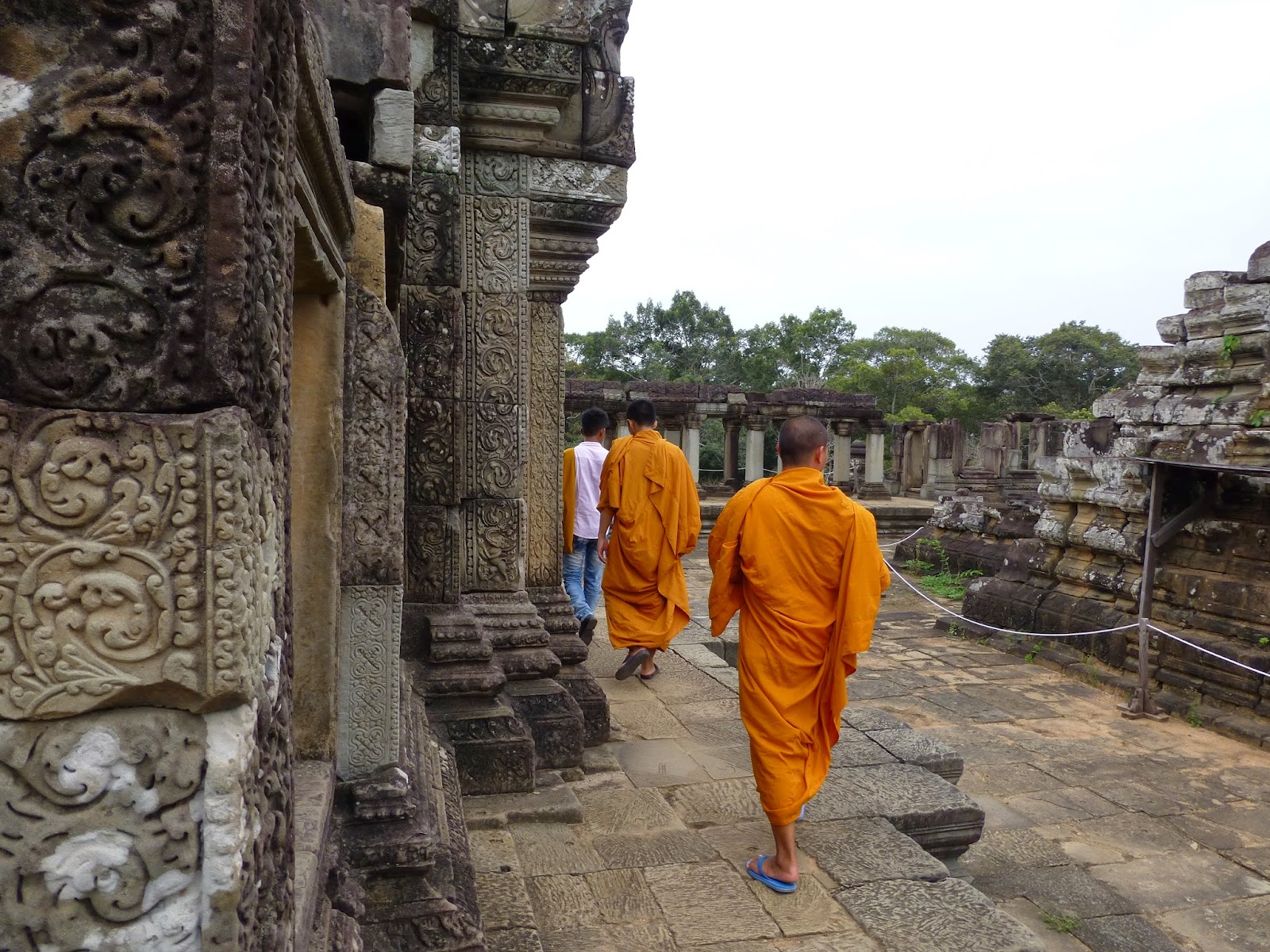 It was a walking trail from the Phimeanakas (a temple within the vicinity of the Royal Palace Area), making our way through to the Elephant Terrace, which is a reminiscence of a Khmer version of a gladiator arena and lastly to the King Leper Terrace, a simple labyrinth-like pathway with high walls (what the terrace is for, nobody knows). 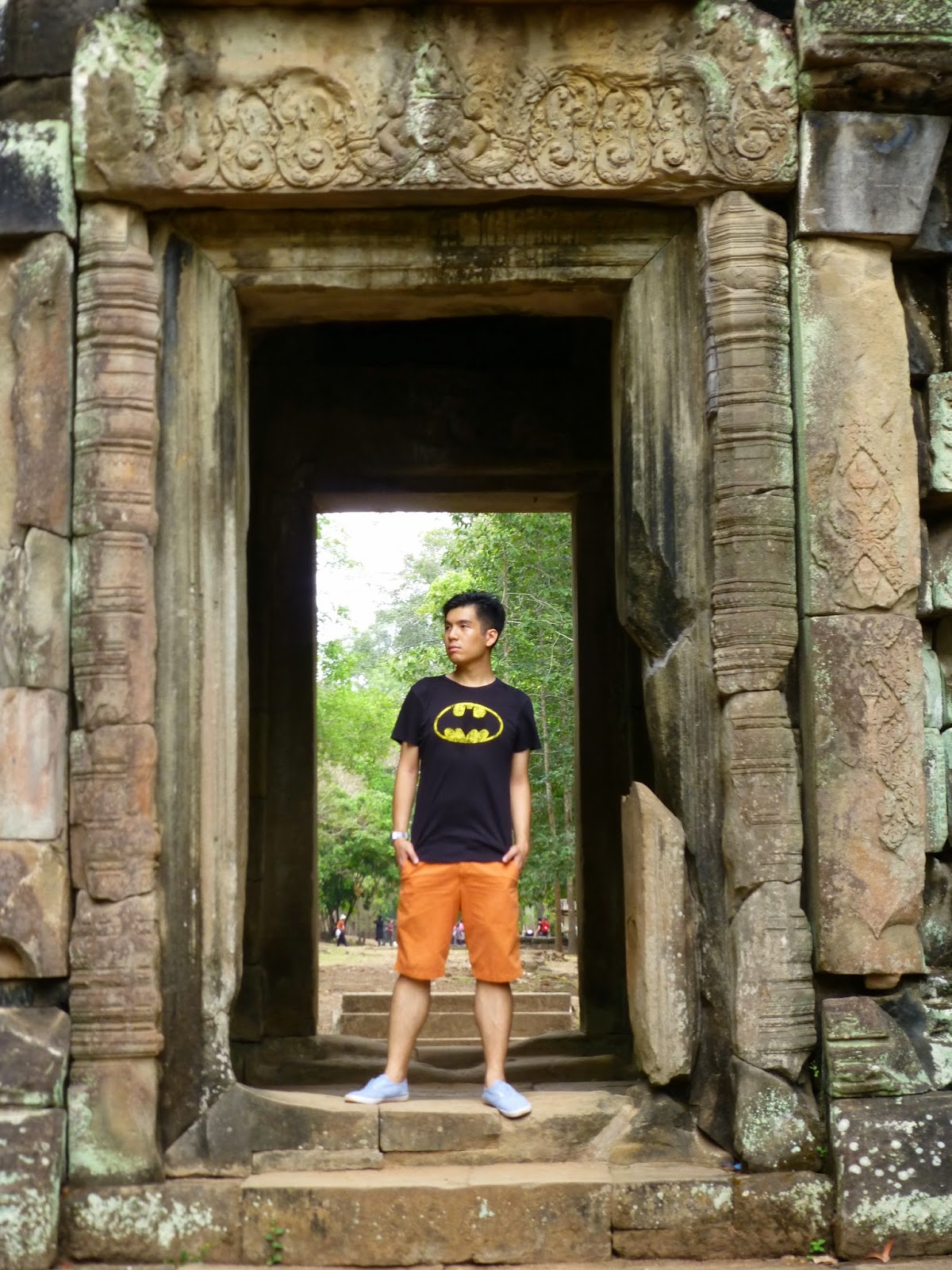 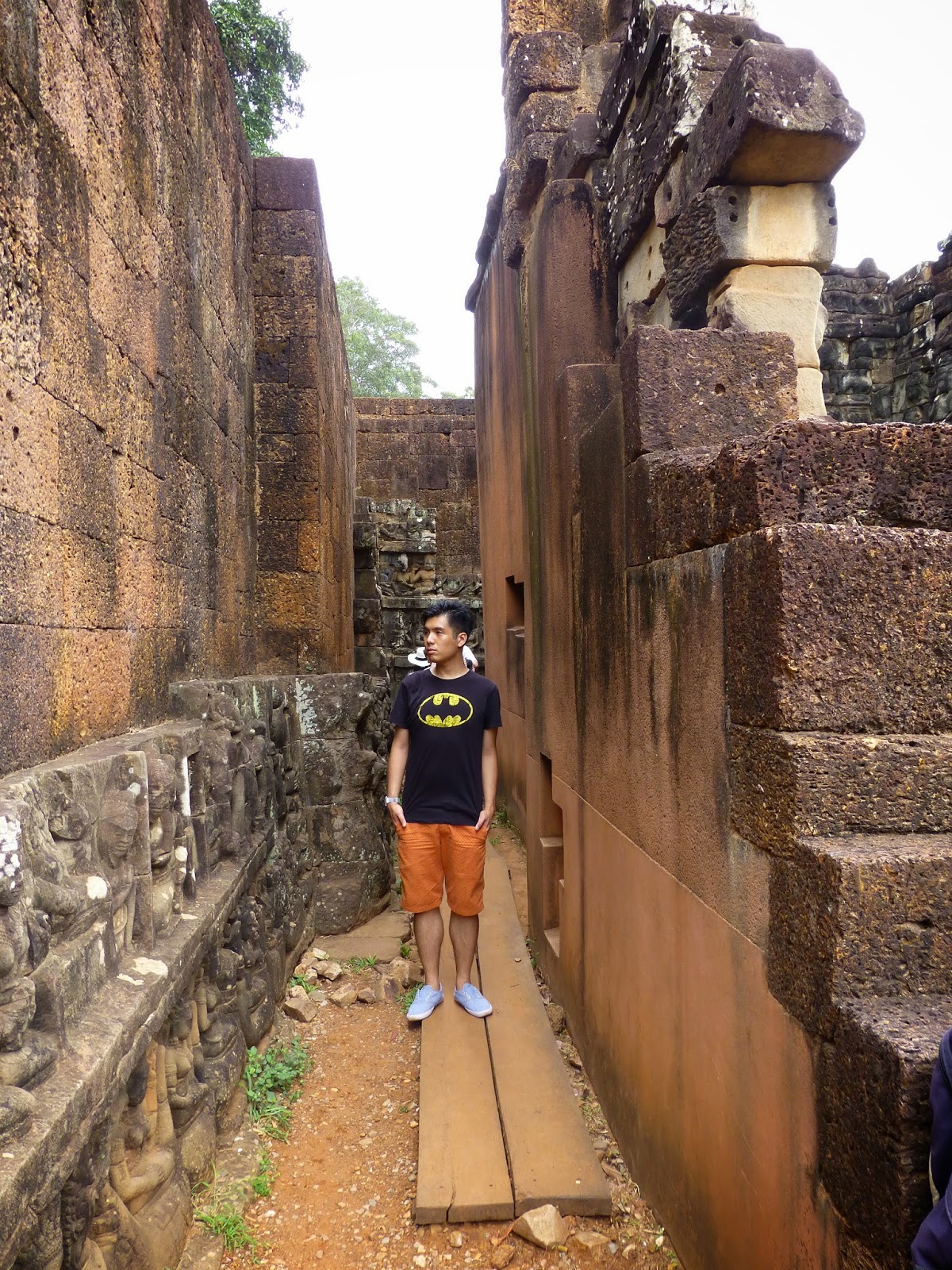 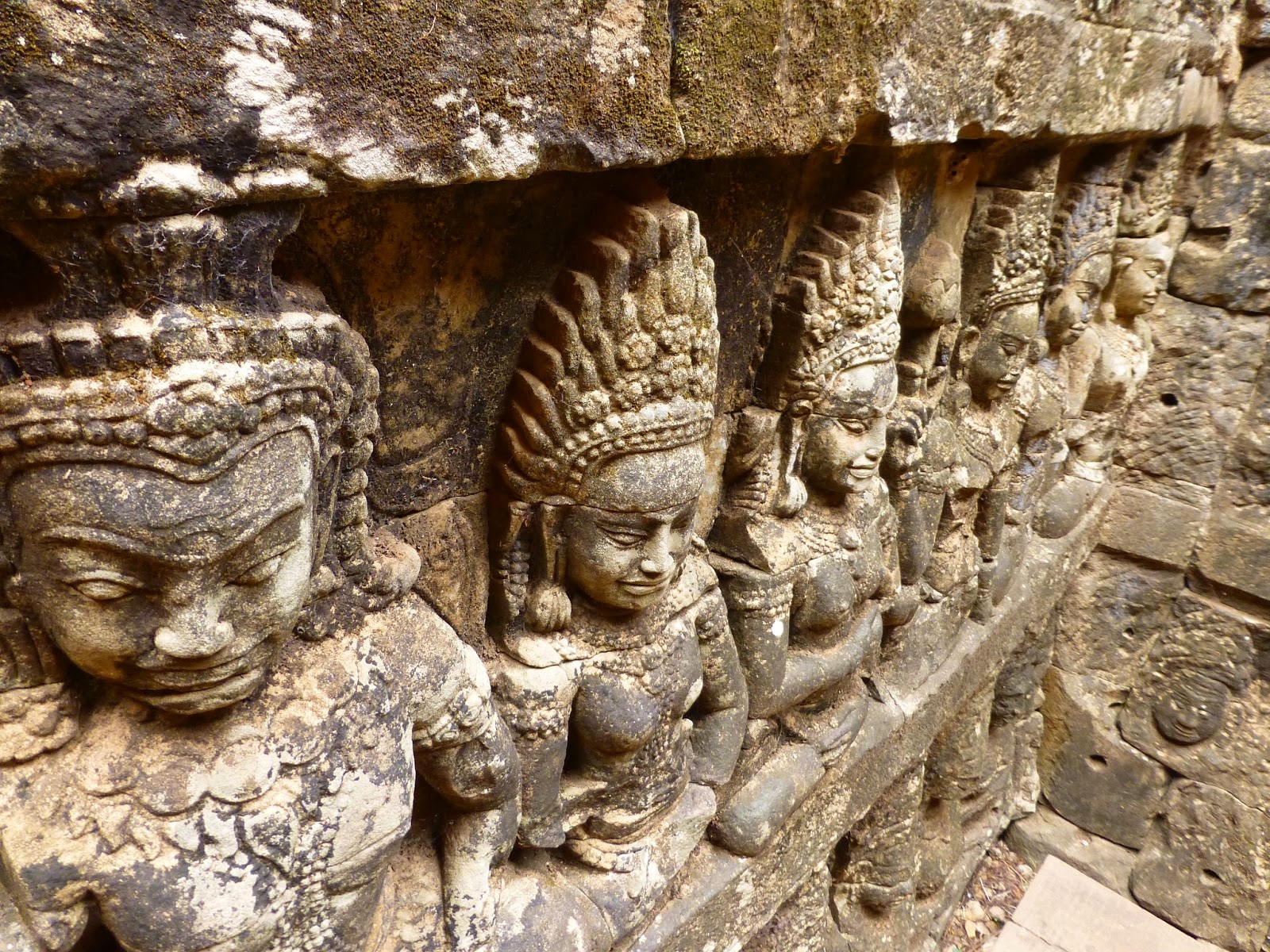 Thommanon (ប្រាសាទធម្មនន្ទ) and Chau Say Tevoda (ប្រាសាទចៅសាយទេវតា) are Hindu temples built during the reign of Suryavarman II (from 1113–1150) at Angkor, Cambodia. Thommanon, directly opposite the Chau Say Tevoda and just 500 metres east of the Victory Gate on the way to Ta Keo. After spending hours in Angkor Wat, you would notice that the devatas sculptures would very much look repetitive (then again, may I remind that I did this tour without a proper tour guide, hence pardon my ignorance to this matter). 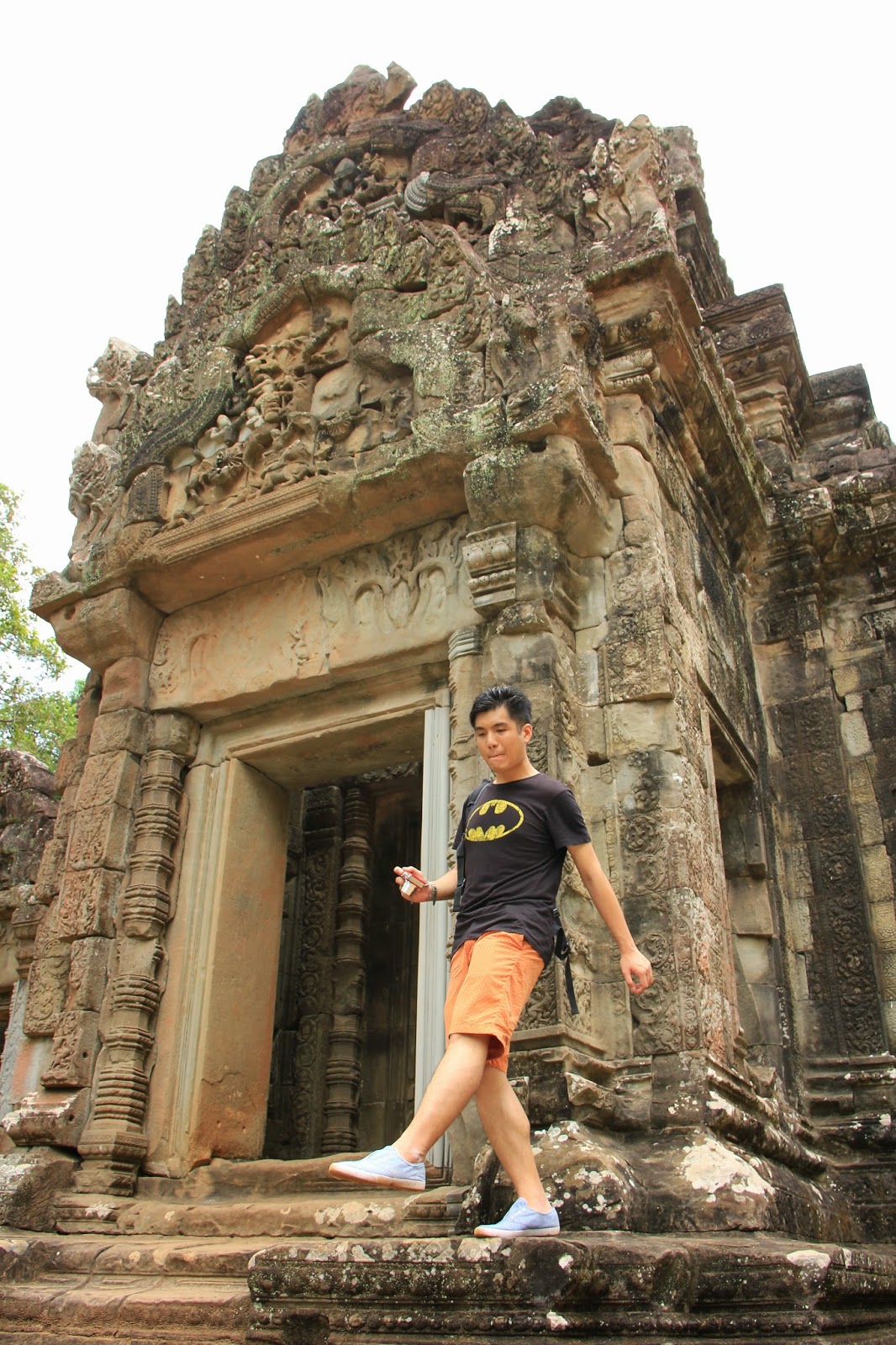 Possibly the second most popular location in the Angkor Archaeological Park, the primary attraction to here is the twisted trees made mainstream by Angelina Jolie in Tomb Raider. Brief walkthrough of the temple's story, this temple was dedicated to Lord Brahma (Prohm) and built during the period between mid 12th century and early 13th century by Khmer King Jayavarman VII. We did ask our Mr.Borin where was the tree everyone raved about, and he simply replied, the entire temple has the trees. Well, it's true though, trees, trees, trees everywhere but we did not locate the most iconic spot. Gah! 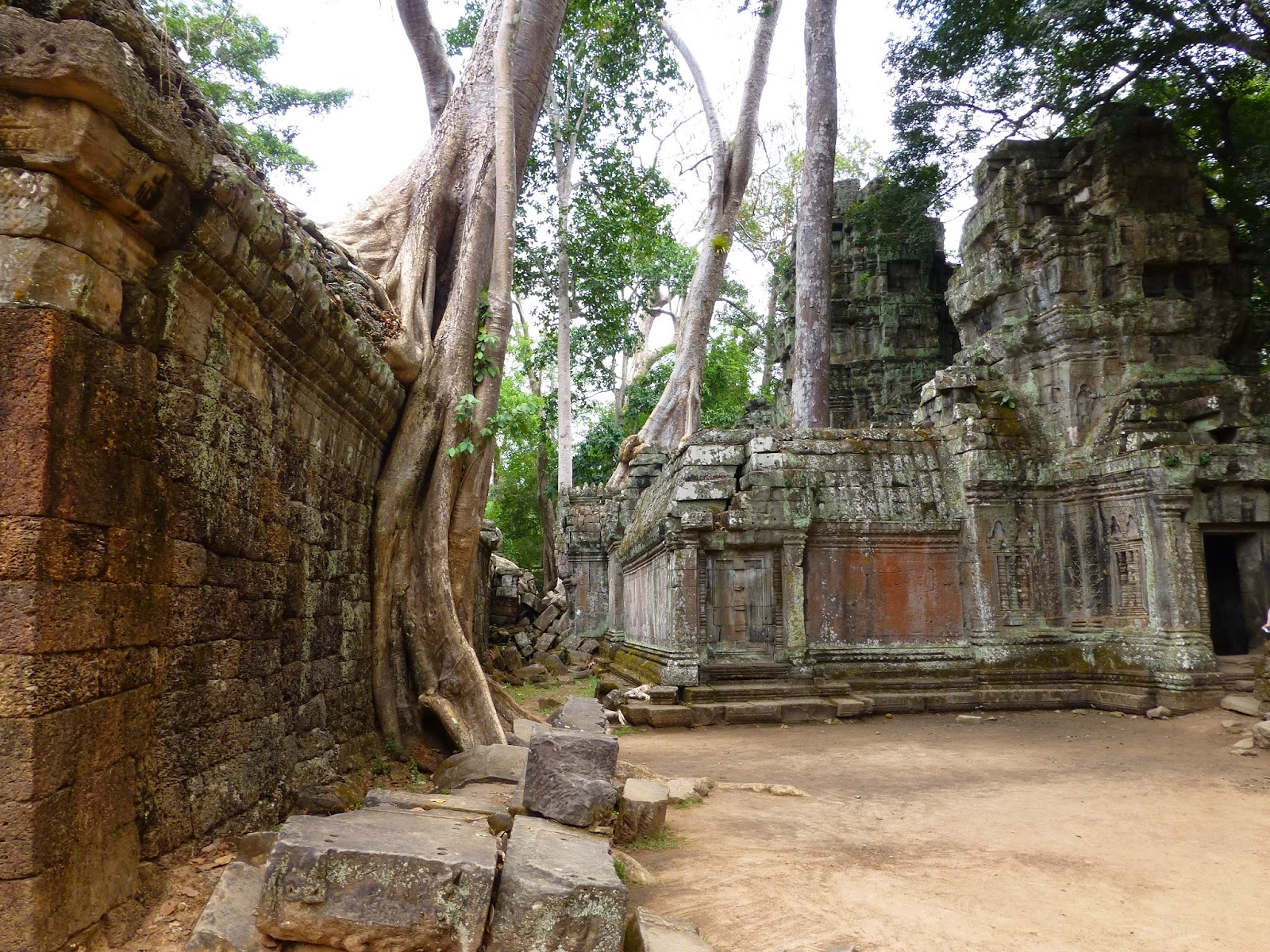 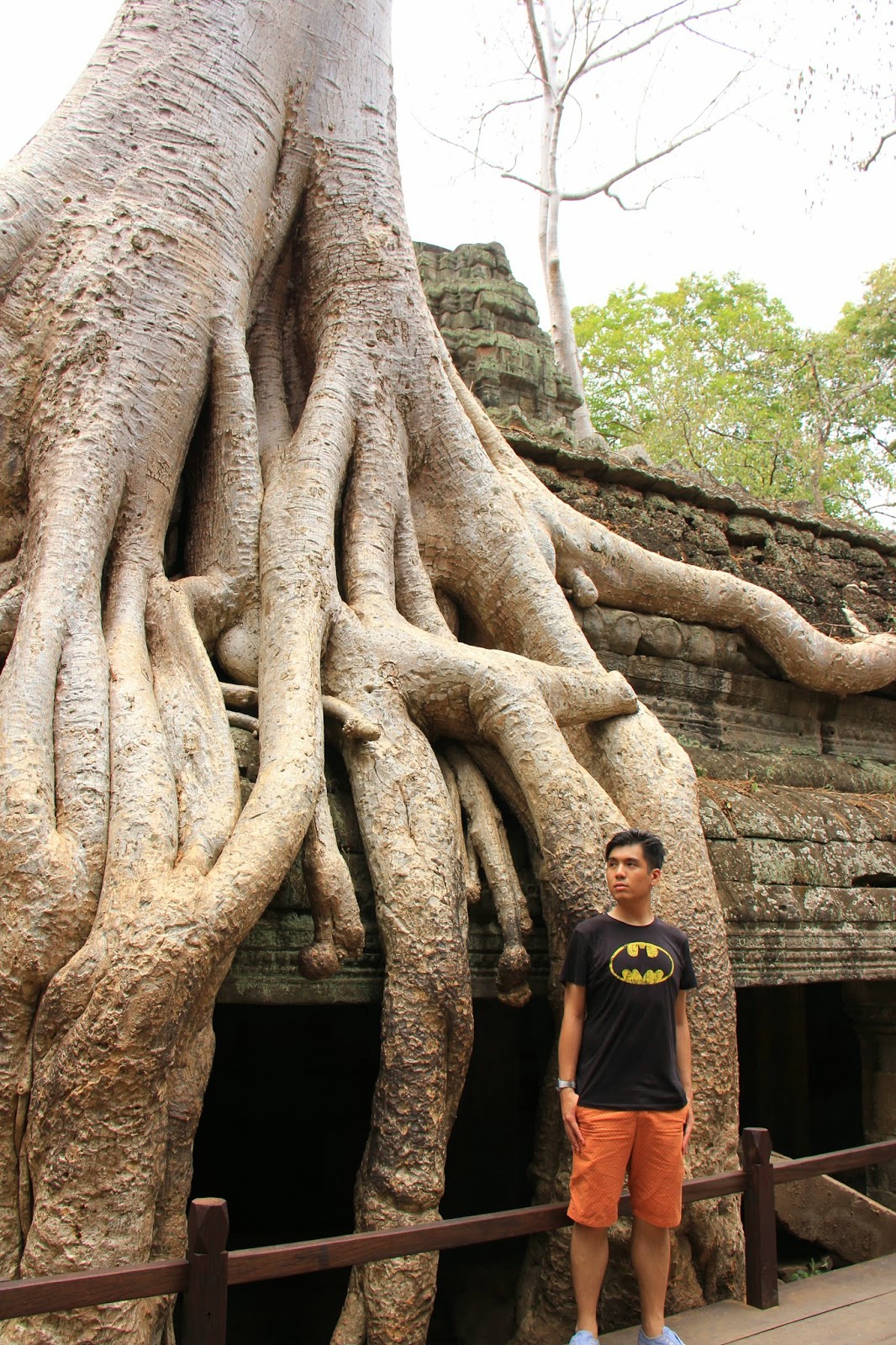 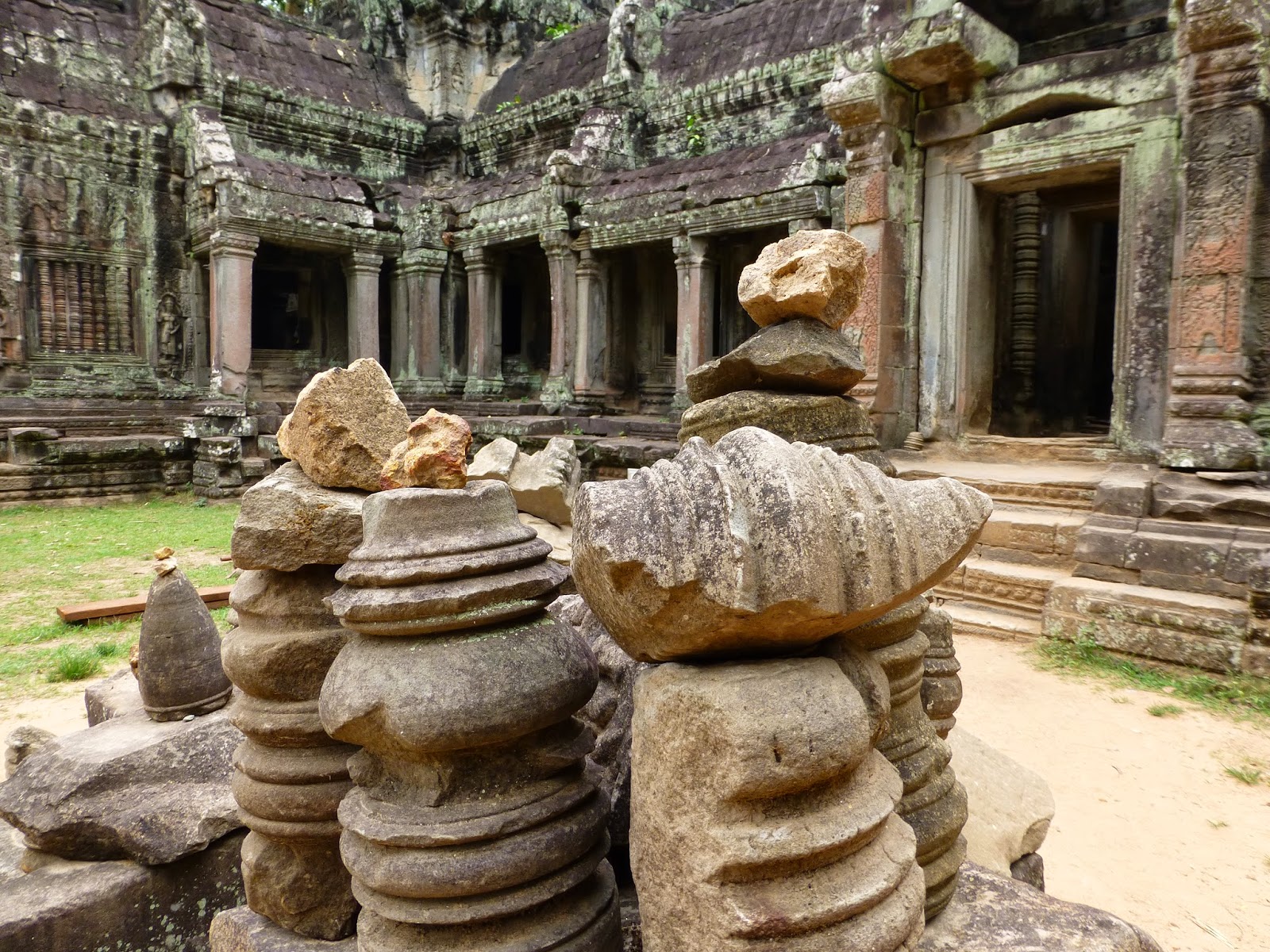 7) Lunch Interlude and Back to Phnom Bakheng for Sunset

We settled for lunch around 1pm or so, and had some local dishes to fill our tummy. We did try the amok, which was palate pleasing as the usage of spices and way the dish is presented, is not too foreign to what we have in Malaysia. After lunch, we made our way to a quick stop at Ta Keo for a brief walk before settling back to the hotel for a quick shower and out again for the trip closure at Phnom Bakheng. Luck wasn't at our side again as it was relatively cloudy and it was slightly drizzling. We decided to skip the sunset wait and made our way down instead and meet Mr. Borin for a ride back.


If you do have more than a day in Siem Reap, the other alternative to Tonle Sap visit, you may attempt to visit the lesser known temples there (the map above might inspire you to get yourself during the park trek and who knows, you might surprise yourself with your self discovery).

The park itself is relatively safe, but of course be wary of when it is getting dark or so. Also, there would be plenty of pretty persuasive salespeople who would approach you with items for as low as USD $1. Follow your conscience in this matter. The locals here are just trying to make a living and that single dollar could go a long way for them.

Personally, I was not as blown away compared to when I was in Borobudur, Indonesia but Angkor does gives a different kind of grand perspective to the treasured marvels in South East Asia.Would I revisit Cambodia? I would give a non-hesitant yes if I've been given a second chance to do so :)
Posted by Unknown at 4:26 PM