Borobudur, a UNESCO World Heritage Site is a 9th-century Mahayana Buddhist Temple in Magelang, Central Java, Indonesia. The monument consists of six square platforms topped by three circular platforms, and is decorated with 2,672 relief panels and 504 Buddha statues. A main dome, located at the center of the top platform, is surrounded by 72 Buddha statues seated inside a perforated stupa. The monument's three divisions architecture symbolize the three "realms" of Buddhist cosmology, namely Kamadhatu (the world of desires), Rupadhatu (the world of forms), and finally Arupadhatu (the formless world). Constructed on a bedrock hill, its passages are designed to encircle the edifice, which allows monks to walk around it in silent, meditative prayer. For further reading, do find our friend Wiki :) 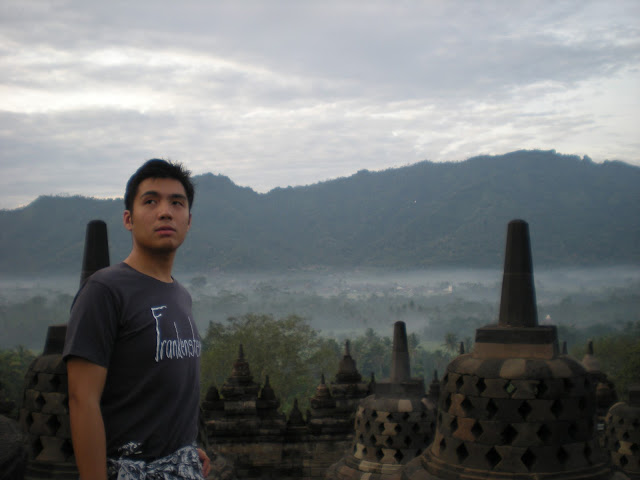 The highlight of our trip, Candi Borobudur and Candi Prambanan. Dubbed as one of the most visited places in Indonesia (alongside with Bali of course), you should not give this a miss if you’re here in Yogyakarta.


Seizing the opportunity of tourist potential, you will be spoiled with choices for how you would want to manage your trip there. From the adventurous end of the spectrum, you may opt for renting motorcycles and make your way from Yogyakarta central or hotels that are in close proximity with Borobudur. That is probably the cheapest tour option given that you have done your extensive research on how to shave the cost around. 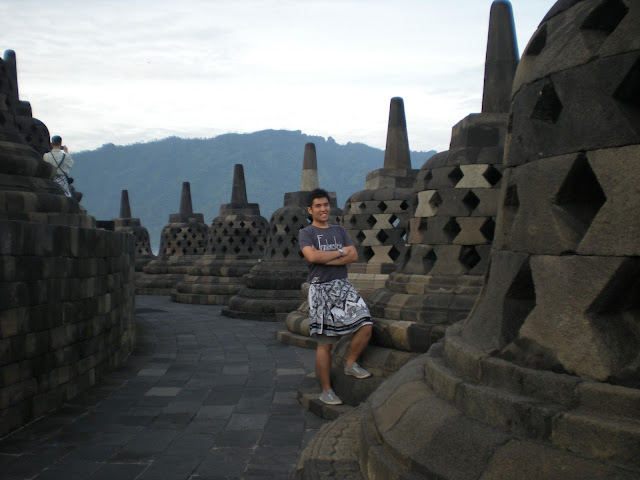 Foreign tourists are charged much higher compared to the locals. So if you look the part, you could try going incognito as the local and enjoy the entrance fee at a much cheaper price. Speaking of entrance fee, there is a notable difference between the time of entrance which will spark the question in your head, to sunrise or not to sunrise. 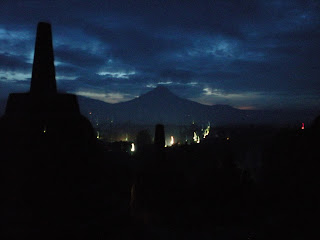 The Sunrise Tour is managed by Manohara Hotel, which charges (tourist rate) 400,000 rupiahs per entry for sunrise period, and only 200,000 rupiahs (if I’m not mistaken) for ‘after sunrise’ period, which is essentially after 7am, GMT+0900. Manohara guests are charged differently though, which you could find out by contacting them at their website.


I opted for the Sunrise Tour for various reasons.
1.       I was swayed by various blogs and sites that the sunrise view in Borobudur is worth every rupiahs.
We were lucky that there was not many tourists when we went up that day (at around 5-ish). Making the way up in the dark isn’t exactly scary, I felt tranquil heading up the magnificent architecture with the main stupa vaguely visible on top of the Candi. At the Arupadhatu level of the temple (highest level), we made ourselves comfortable at a spot facing Mount Merapi and waited patiently for the sunrise to appear. 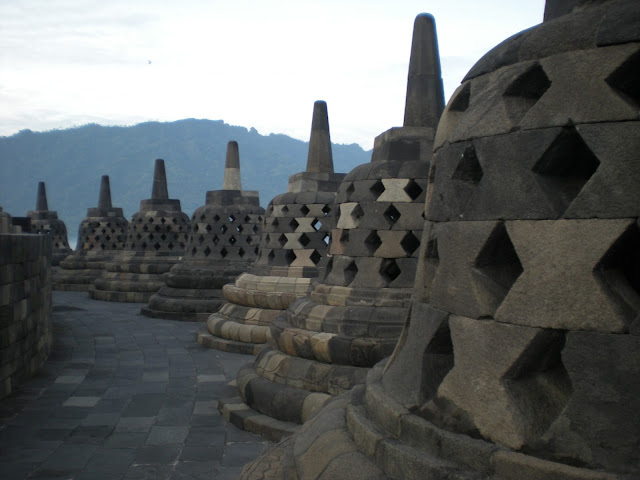 Few notes to take, if you’ve got a hunch or know that the weather is gloomy or wet, don’t disappoint yourself by getting the Sunrise Tour. If you’ve prearranged the tour ahead, you can talk to your tour guide to opt for the after sunrise entry (if you’re adament of entering Borobudur) so that your cash does not go to waste. Rules of thumb, food are not allowed in the site, and be respectful of the other visitors around there. We were comfortably sitting at our spot while Pak Irwan was explaining the history and sharing stories of Borobudur and Mt.Merapi when a Caucasian lady rudely shhhed us. I wasn’t provoked per se, but was kind of irritated with the way she does that. Oh, Madam Righteous was all about respect, and respect was what she failed to give when she openly munched her breakfast despite being forbidden from doing so. I wonder how she passed through security clearance. Pfft.


Sunrise. It is really depending your luck, really, to get that picture perfect moment of the round sun figure and the amber sky. We however were deprived of all that, but we counted our blessings since the weather was fine enough for us to get a clear view of Merapi and the Candi surroundings. 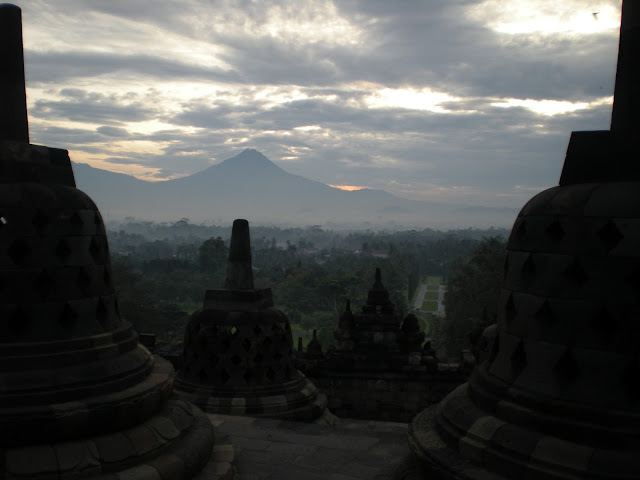 We then walked around the temple like how thousands of Buddhist pilgrim in Indonesia does, by entering from the East entrance and walk around clockwise. Representing the Buddha’s Sphere of Formlessness, unembellished stone walls surrounds this higher terrace, with the main stupa itself is empty and said to symbolize nirvana. 72 Buddhas scuptures resides individually inside the stupa with surrounds the main stupa. Some of the stupas were exposed though while many remained intact which we will have to peek inside to see the Buddha statue. 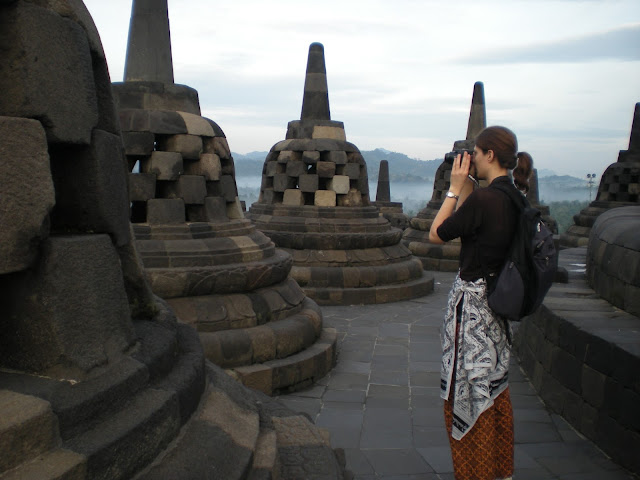 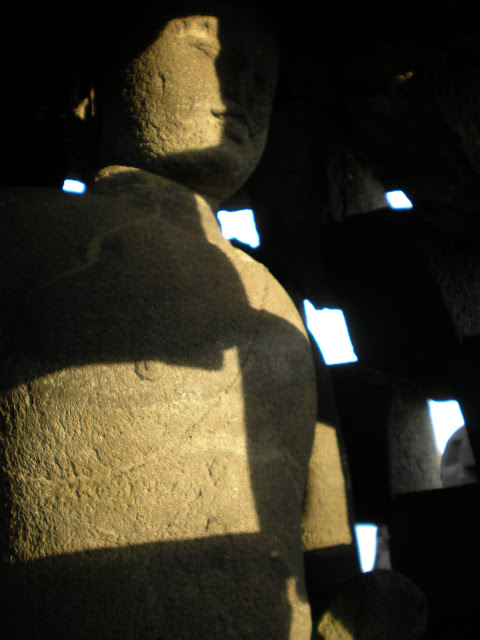 The stupas architectures, stories carved on the walls and Buddhist sculpture really mesmerized me. You don’t exactly have to be a staunch Buddhist to appreciate what I consider to be one of the Ancient Wonders of the World. 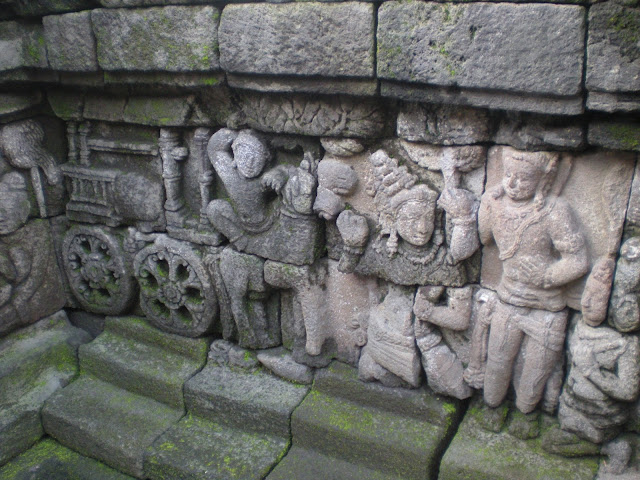 We slowly descended to the Rupadhatu level, where the Life of Buddha from heaven descend till enlightenment was immortalized on wall scupltures. Among the 504 Buddha statues, a lot of them are beheaded due to vandalism and nature disaster but many of them are still intact. Each statue displays a mudra, or hand gestures with depicts the four directions including central.
1.       East – Mudra calling the earth to witness 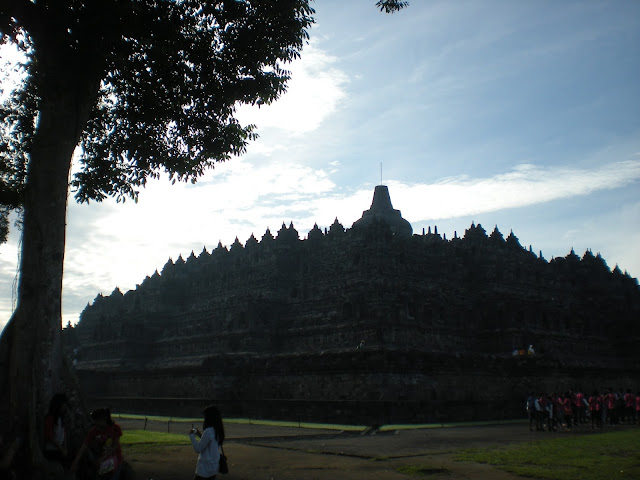 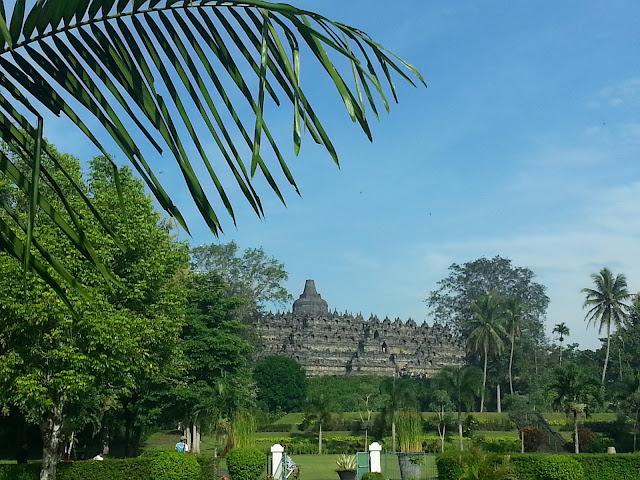 Before heading to Prambanan, we made stops to another two other Buddhist candi around Borobudur’s vicinity, namely Pawon and Mendut. Pawon, is said to served to purify the mind prior to ascending Borobudur. The exact reason of the construction of this candi remains speculative. The slightly larger candi than Pawon, Candi Mendut is alligned with Pawon and Borobudur.

Three beautifully carved large stone Buddha statues are in the main division. The 3 metres tall statue of Dhyani Buddha Vairocana was meant to liberate the devotees from the bodily karma, at the left is statue of Boddhisatva Avalokitesvara to liberate from the karma of speech, at the right is Boddhisatva Vajrapani to liberate from karma of thought. These divinities are said to be the spiritual purpose of the temple establishment. Deep indeed.


The passage of rites, during Wesak, Buddhists in Indonesia will start their journey from Mendut, crosses through Pawon and finally ascending Borobudur. This might be a whole new intriguing experience that I might sign up for future Wesak Days. Who knows. 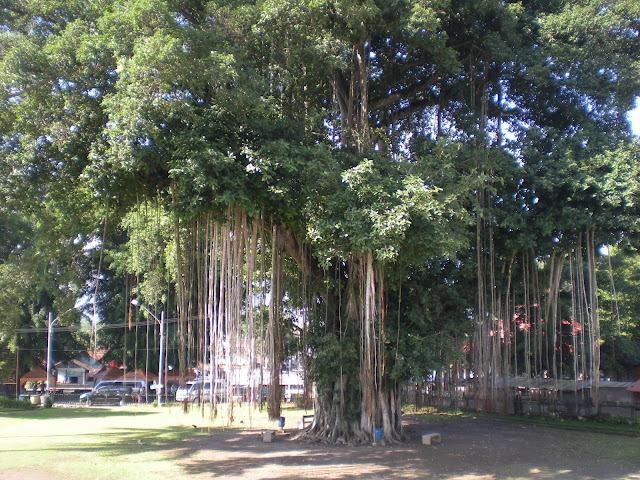