Courtesy of AirAsia, I managed to snag a pair of shiny return ticket to Phnom Penh, Cambodia. Psyched and excited, as Cambodia was one of the countries in South East Asia I've yet to visit (at the time of post, Philippines, Laos, Myanmar and Vietnam to go).

The dilemma though, it takes about 8 hours bus ride to Siem Reap, home to Angkor Wat (which was where I really wanted to go). The more expensive option on the road but lesser stops compared to bus is to take a cab, and the fastest and costliest option would be taking a flight.Wanting to maximize the free flight to and from via Phnom Penh, we decided to just take the bus and travel between the two cities. I am the type of person who would arrange and pay for accommodation/ travel/entrance fee/food whenever possible prior arriving to the destination.

The travel route was KL - Phnom Penh - Siem Reap - Phnom Penh - Siem Reap. For the transportation, we took a comfortable slot of 11.30 a.m. departing from Siem Reap to Phnom Penh for USD $16 via Giant Ibis on the 12th of April, 2014. However, we couldn't, or rather we chose to take a calculated risk to catch an early bus upon arriving Phnom Penh to Siem Reap on the 10th of April, 2014.  The flight arrives Phnom Penh on 7.35 a.m., and we expect to reach the city at 8.30 a.m. after clearing immigration and such. Thus, we thought of widening options and get to the bus stop upon arriving to catch a 9 a.m. or 9.30 a.m. bus to reach Siem Reap by 4 or 5 p.m. to catch the sun set in Angkor. We exited the immigration area, bought ourselves phone data/local number for USD $10 (two phones) before heading to town.

Oh, upon taking the tuk tuk driver, and we specifically mentioned the bus that we wanted to take (Giant Ibis), he suggested another bus operator as the one he recommends is less crowded and chances to get tickets would be greater. Trusting the local, we soon arrived to the Rith Mony bus stop, only to find out that the earliest that we can leave is 12.30 p.m. Since there was not much of an option anyway, and we decided not to jump to the next bus station, we took the bus, for USD $13. We had a stroll along the busy streets of this part of Phnom Penh, and had lunch before boarding the bus. The currency for Cambodia is Riel, but USD is widely accepted as well.

(The general conversion is USD $1 = 4000 Riel, so effectively the Riel is used for cents calculation.)

Rith Mony has a more local feel compared to Giant Ibis. The reason I said that is because the driver drops off and picks up the locals along the way, delivers item from town to town and it is very apparent that the locals uses this bus service as a mean of transportation. Comparing the two bus services, Giant Ibis has Wi-Fi, better air conditioning, some snacks and lesser dubious obvious stops. But who am I to complain? This is probably one of a good experience to blend in with the locals.

After a looooooong ride (and multiple stops for pickups and pee break), we arrived at Siem Reap and was greeted by our pre-arranged tuk tuk driver, Mr.Borin who agreed to pick us up and drop us to our hotel room free of charge. After the long ride, we decided to just crash in since we had to wake up early for the Angkor Archaeological Park trip the following day (Read about it here). 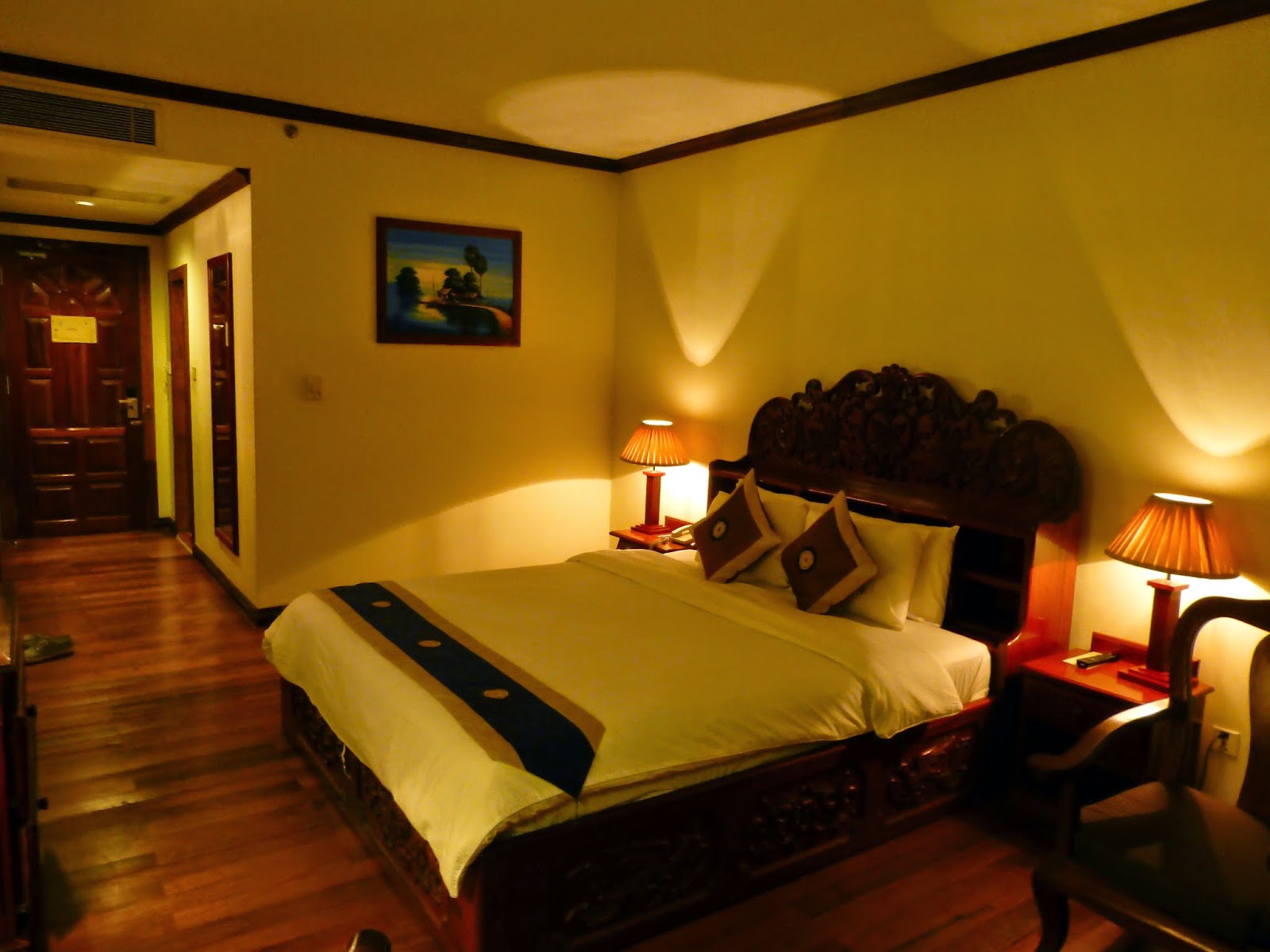 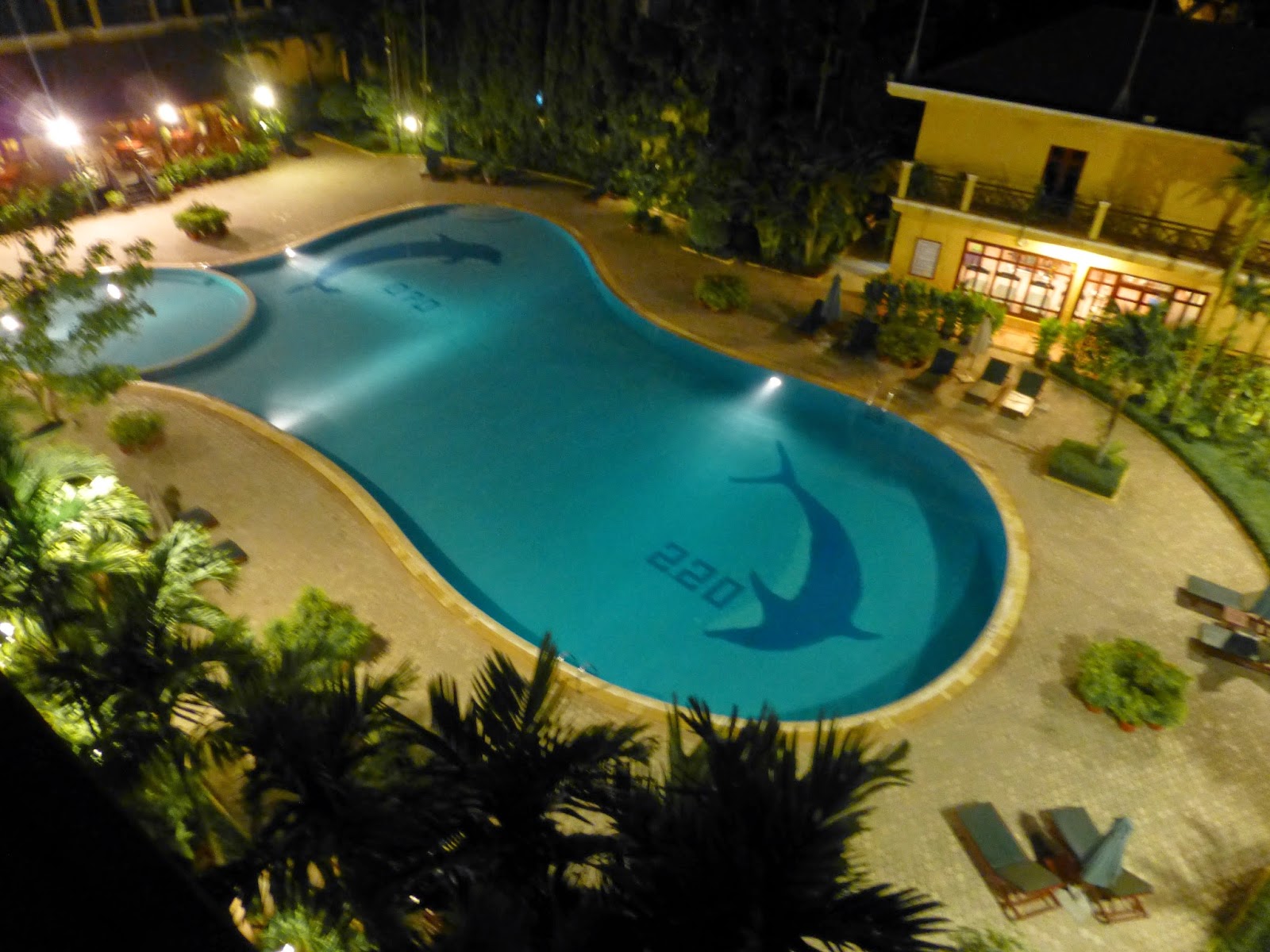 The room we chose was Angkor Paradise Hotel (USD $86.74 for two nights), which is less than 10 minutes away drive from Angkor Wat. Since we had Mr.Borin, getting around was very convenient. After the park trip, Mr.Borin dropped us at the Pub Street, and we had some decent dinner, beer and dessert like a true tourist. Perhaps it was approaching the New Year for Cambodia, the place wasn't as crowded as it was expected to be. 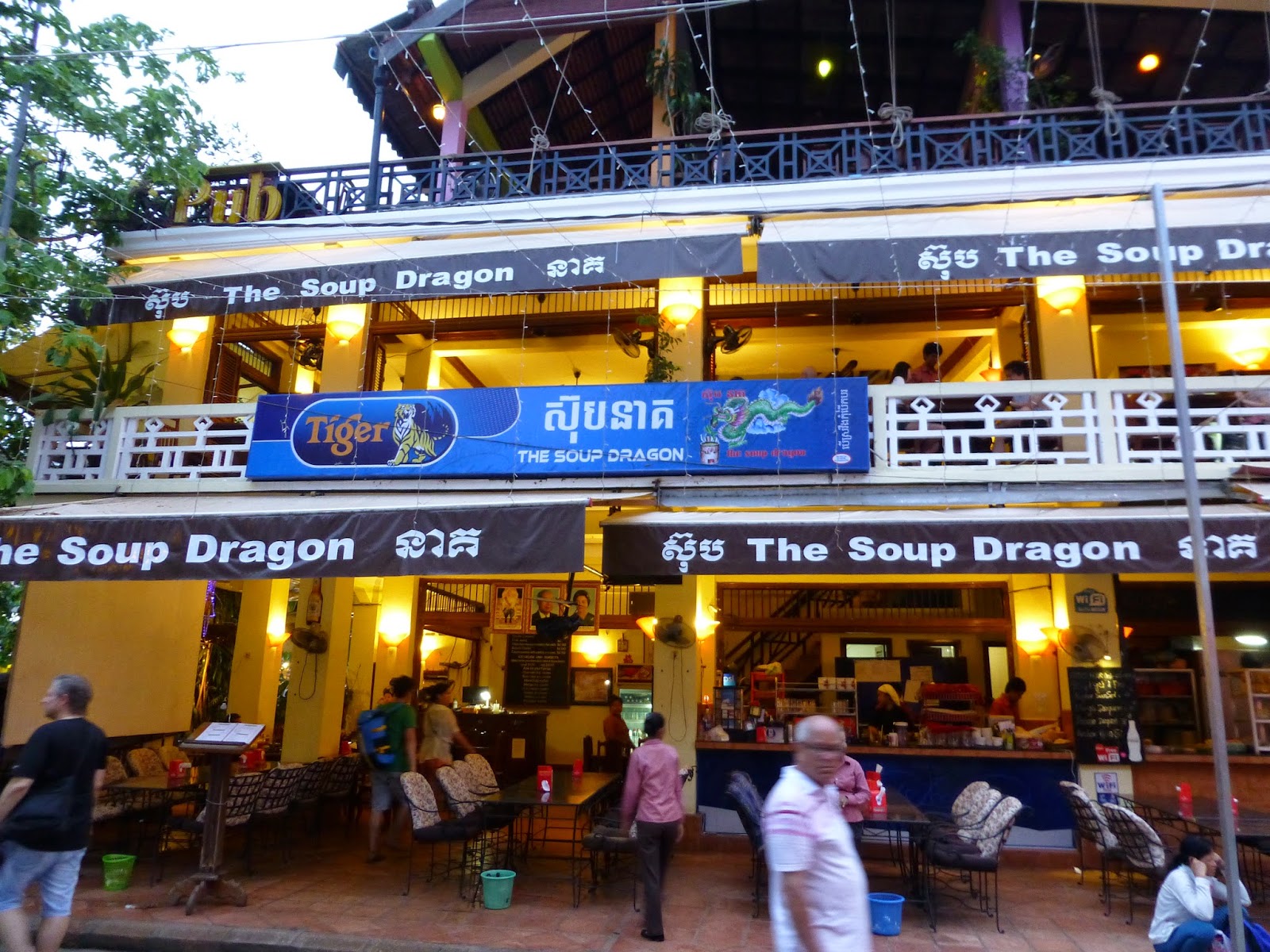 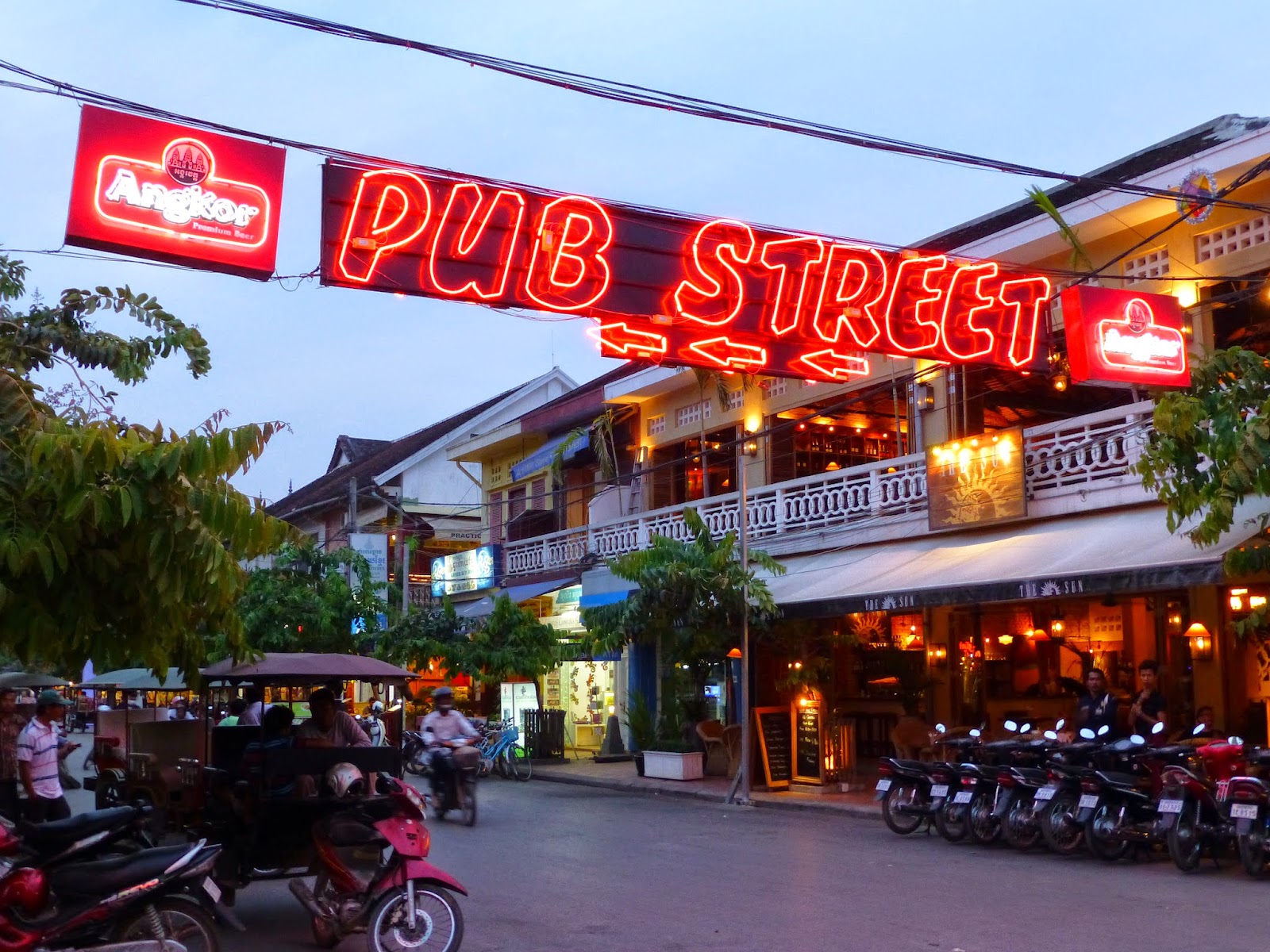 The third day, after breakfast, we headed to the bus stop and yet another loooooooong bus ride, this time to Phnom Penh. The journey via Giant Ibis is much more comfortable, with its spacious leg rooms, complimentary croissant and water, and slightly inaudible movies played on the bus's telly. There's also Wi-Fi but it was not stable enough to properly surf.

We arrived to the Night Market (Phsa Reatrey) overseeing the Tonle Sap river esplanade and we got adventurous, walked our way through the night streets of Phnom Penh, passed by the Royal Palace, Independence Monument and esplanade before reaching our accommodation in Phnom Penh. Technically we have visited *most* of the places that we wanted to see in Phnom Penh, just that we did not snap enough picture as it was already late and we were exhausted. 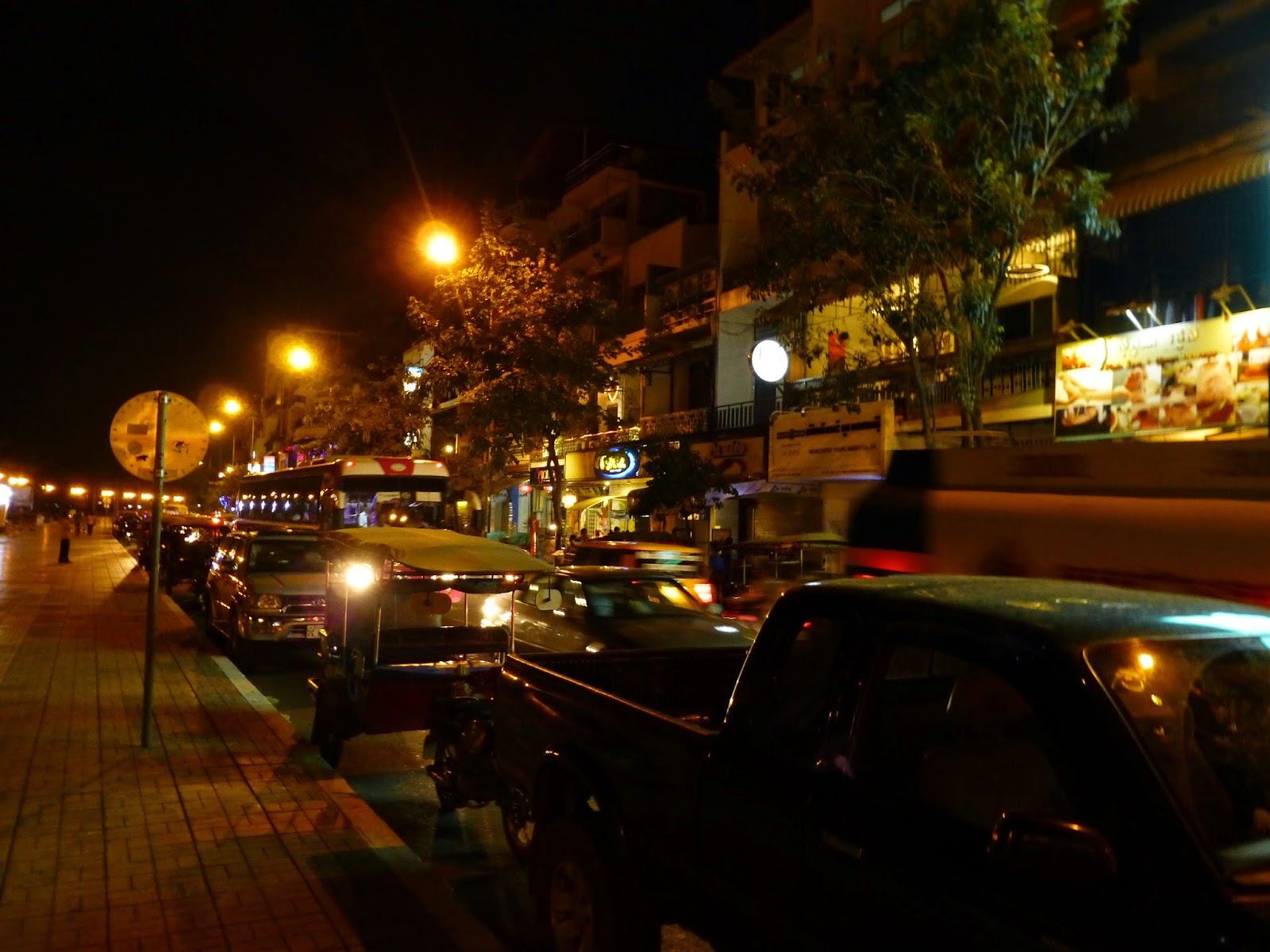 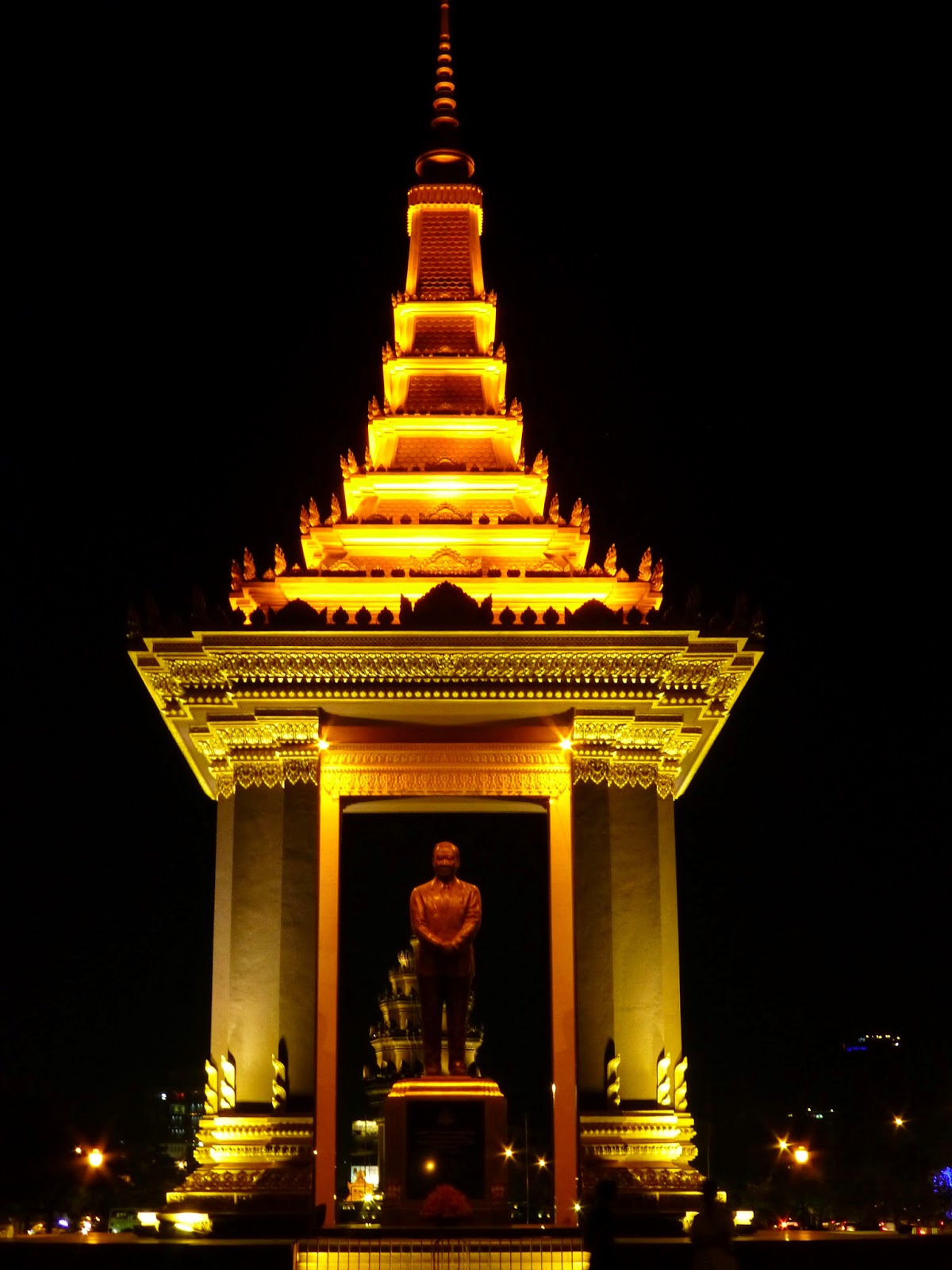 Before reaching the hotel, we did bumped across Chatime, Gong Cha and several other familiar brands, but surprisingly Starbucks and McDonalds have not penetrated the market here. Oh well, no tumbler for me then. We had some western cuisine before crashing in for the night, after two consecutive local cuisine dinners. (Some indulgent splurge for us). 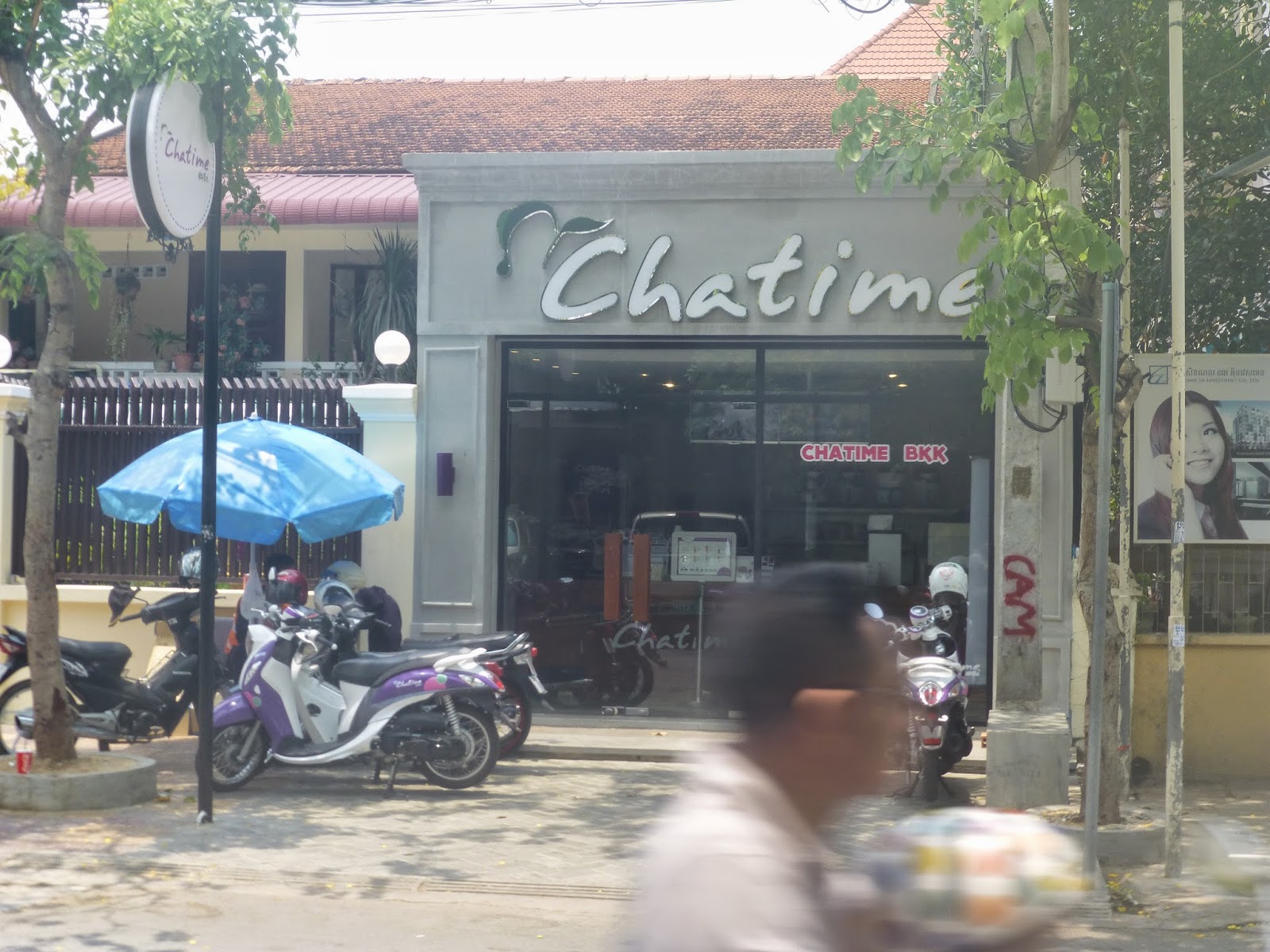 Oh, we stayed at Patio Urban Hotel & Resort ($71.99) and after maneuvering the streets to reach this place, we found our little concocted paradise. The room is definitely chic and clean, with Wi-Fi or course as well. Breakfast is fairly simple to blow us away, but what we were impressed by was the roof top pool that oversees Phnom Penh (okay, it is not skyscraper, but the city view is amazing none the less). 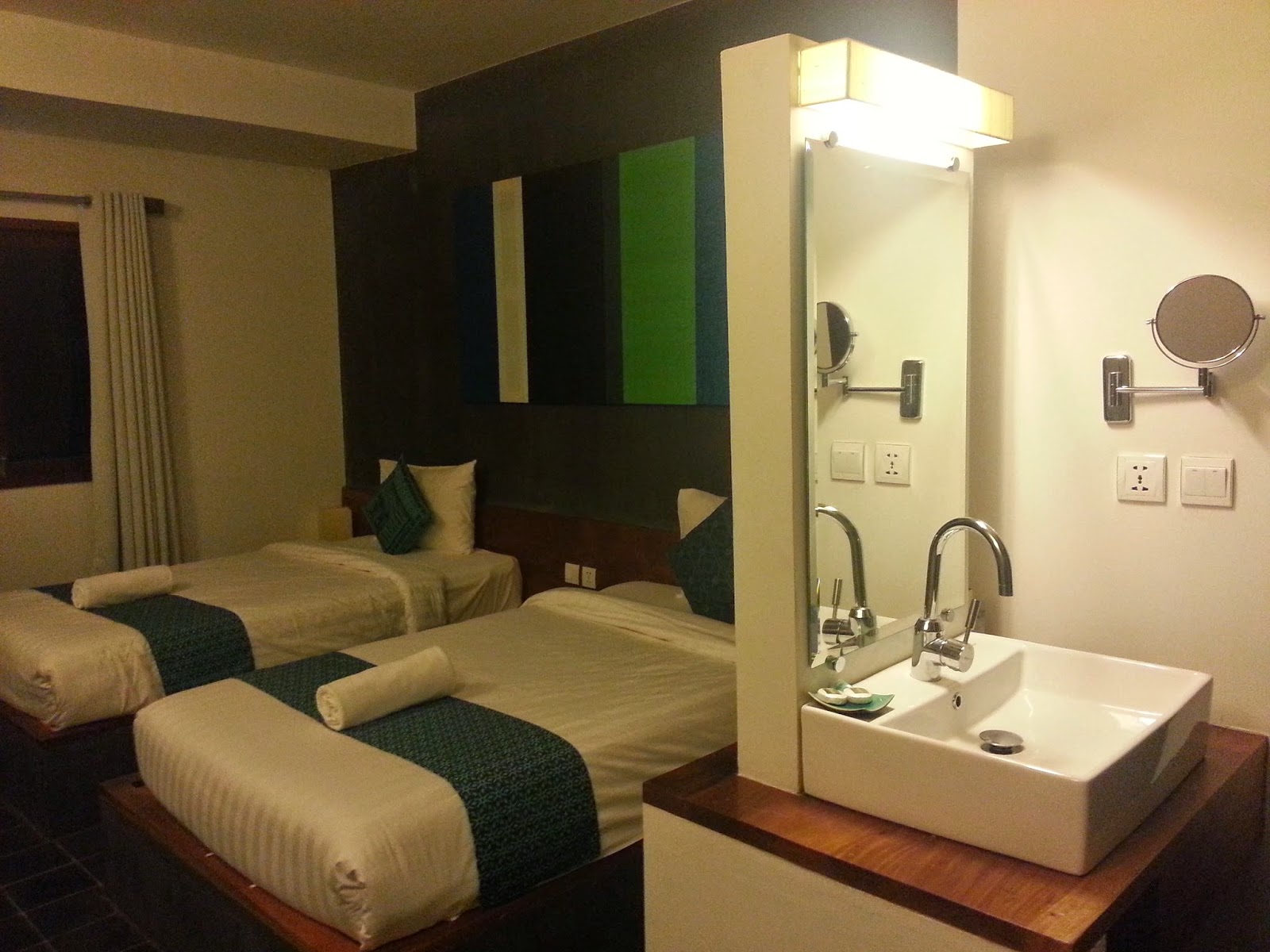 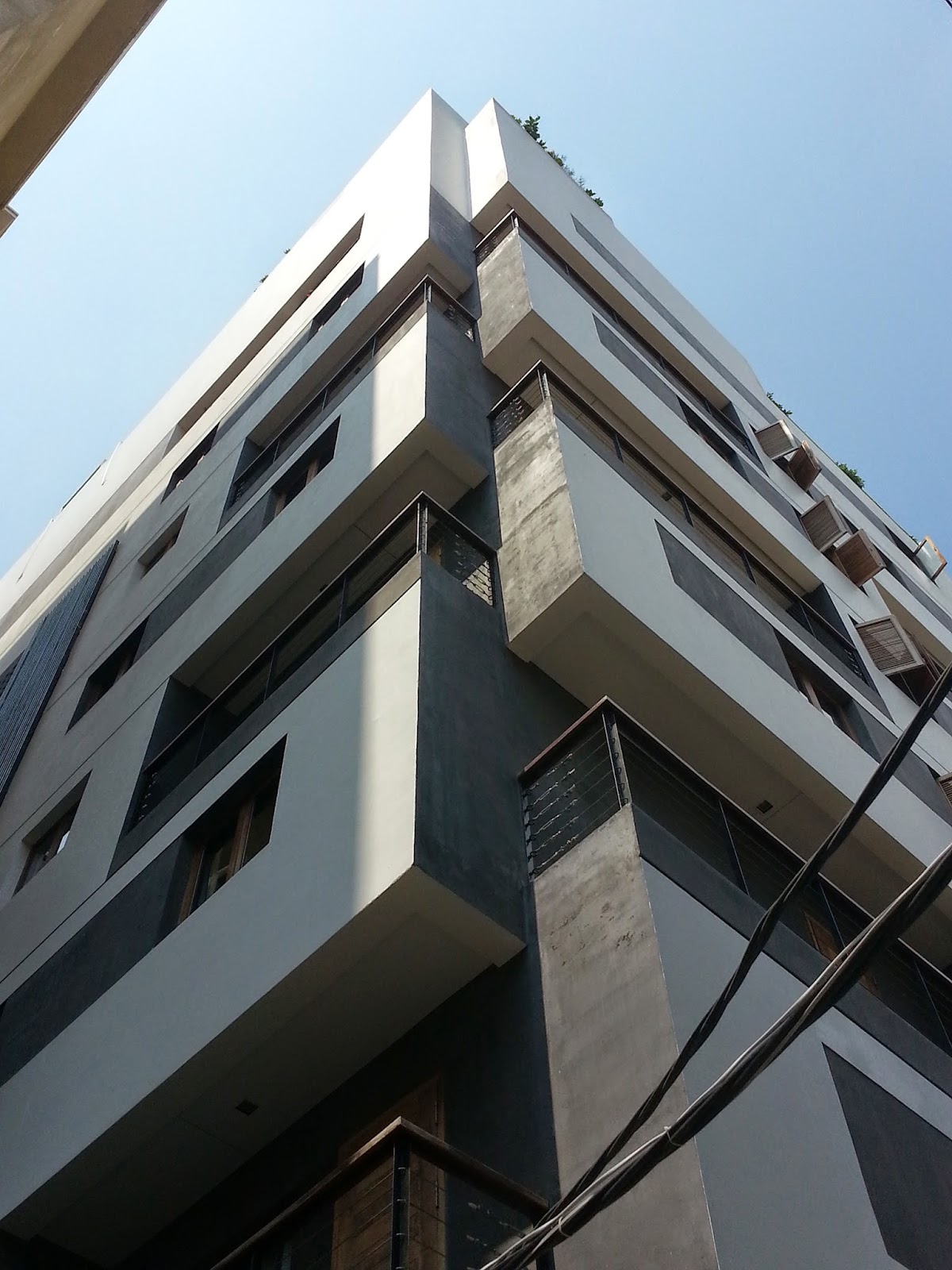 Although the accommodation is within reasonable distance for Phnom Penh sight seeing, and about 30 minutes drive away from the Killing Fields which we had intended to visit (planned before coming here), we had a change of mind and went for some coffee indulgence instead. We dropped by Brown Cafe, which was not too far away from Patio. 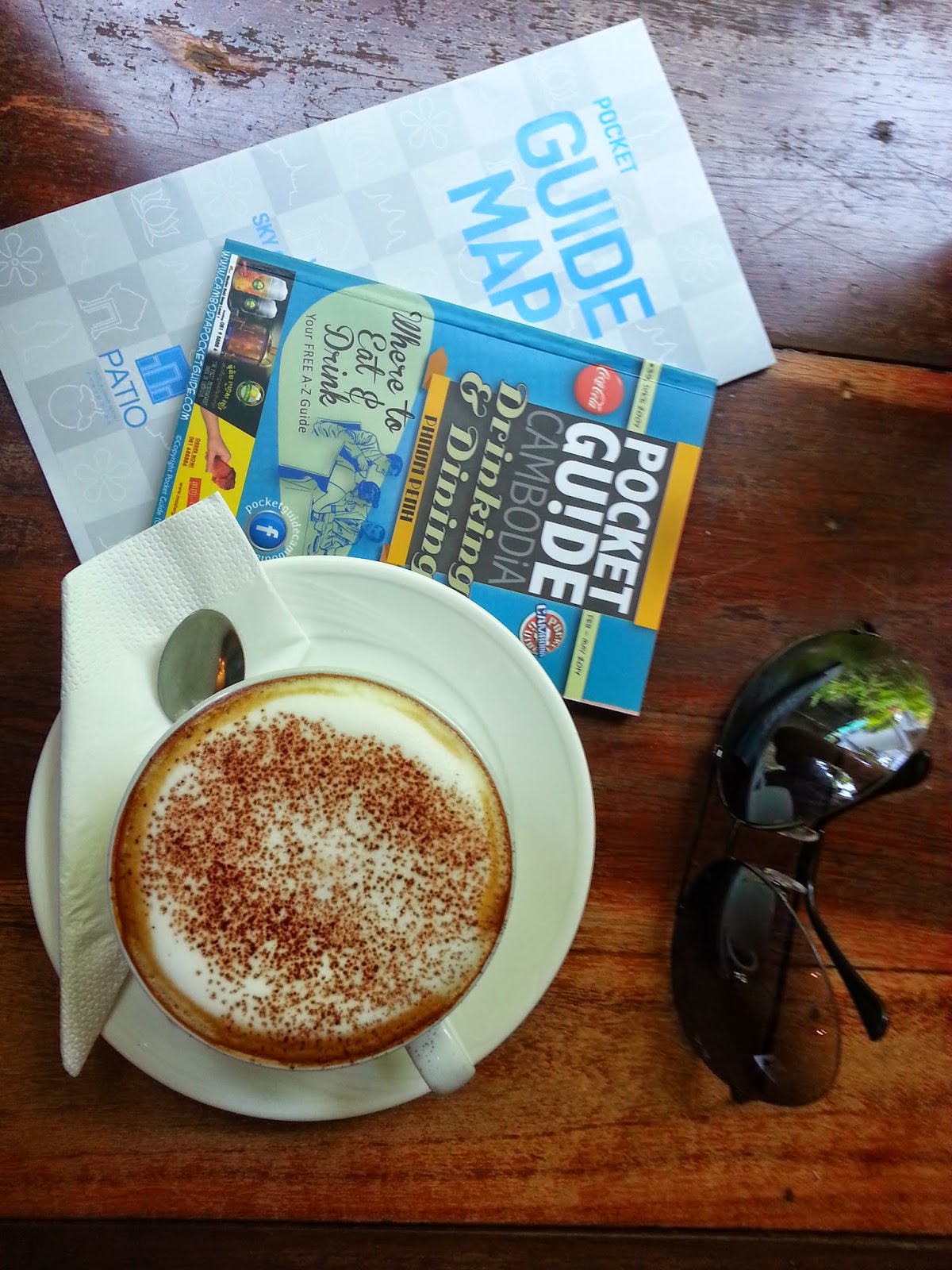 We did do a 'quickie' tour around Phnom Penh though, but we did not enter those places of interests per se. Merely checking in and as any quickie tour, snap snap snap and that's about it. Notable places were The Royal Palace, Wat Phnom and the Independence Monument. 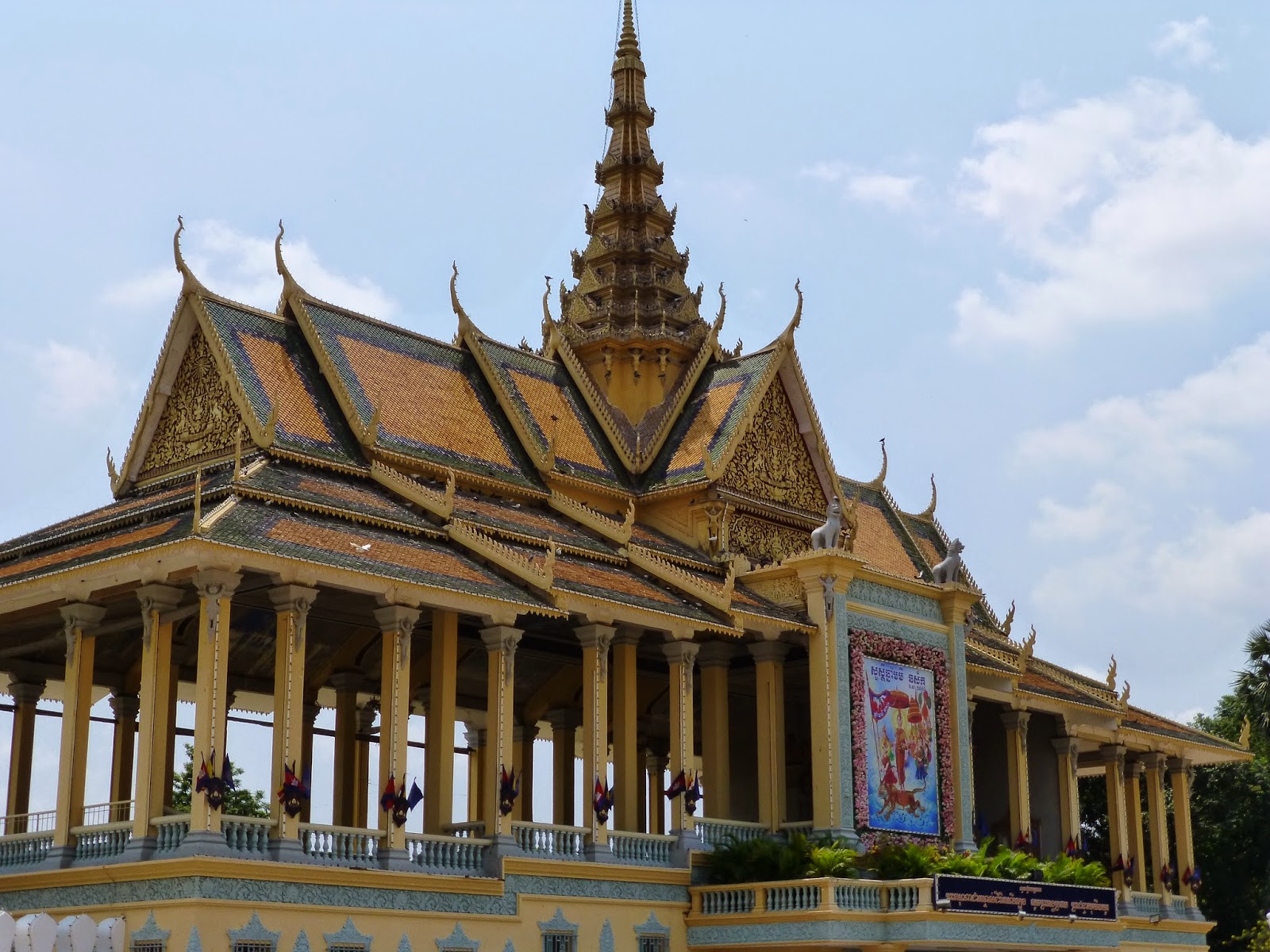 All in all, it was a great journey I had in Cambodia, hopping between Phnom Penh and Siem Reap, and blending in with the locals. Phnom Penh surprised me really of how developed it was (surpassed my expectation). Siem Reap was worth it complementary journey and I would probably fly back here (given the chance). That's all I have for Cambodia, and cheers to the possibility of my next South East Asia trip! 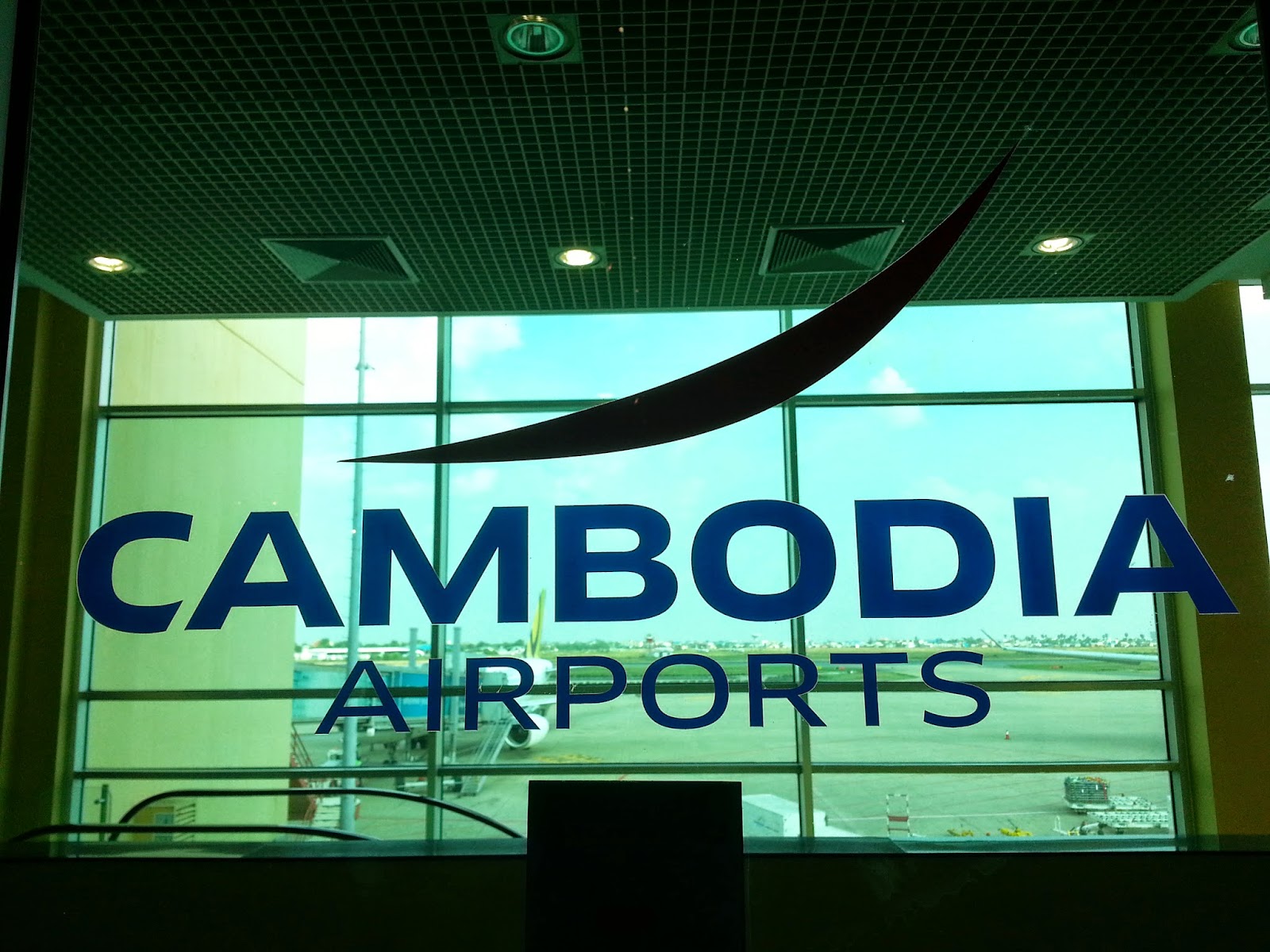