16th of August 2011. We left Aunt Mimi and Uncle Morten's place quite early (continuation from the London blog entry) , given that our flight is 8.25 am, so basically we have to be at the airport by hook or by crook by 6.25 am. Gasp! We didn't know how we managed to wake up that early that day. We managed to catch a 4 am bus, that interchanged at the Victoria station for another bus that leads to Stansted Airport.

Knowing that Spain's weather is about the same as Malaysia in summer, which is 16 - 32 °C, we were thinking, this shouldn't be a challenge! The biggest challenge we foreseen was the language barrier, which we are going to find it pretty interesting when we arrive there.

We arrived Madrid around 11.55 am via RyanAir airlines. Now, I'm not sure how the low cost carriers are being compared over here in Europe, but I would prefer Air Asia anytime due to its familiarity and pretty much for its air stewardess. But we're not complaining much either, we did arrive safely in Madrid despite the not so comfortable flight seats along the way.

Once we arrived the airport and checked in our passports, our first destination was thought to be a hostel, but it turned out to be a huge hall that accommodated almost 30 + of us, which from here on be referred as Pacifico because it is the identifiable name we absorbed since it is near that station. Anyhow, the actual place is called Caritas, just so you know.

Using the metro in Madrid is pretty much like using the Tube in London, pretty well drafted map to follow. The only issue about the metro is, the ticketing is not very strict and people conveniently went over the borders and use the train for free. We managed to reach Pacifico station all the way from Barajas within 2 hours, and when we arrived there, we started looking for our so called accommodation. We asked some of the locals for directions, but I would say, most of them cannot speak English but at least I recognize a few key words which eventually led us to our accommodation.

About World Youth Day, the package that we paid for is around €362 (about RM1450), which was inclusive of accommodation, train ticket that could bring us anywhere within the Metro vicinity and 3 meals per day in forms of vouchers. The meal vouchers can be used at any food outlet that has the World Youth Day sticker at the store front.

It was quite a deal, and although I am not a full fledged participant (and Larry knows about it), I am there to participate the program as I go but I was given leeway to walk around should I choose not to participate in any of them (since I am not a Catholic) 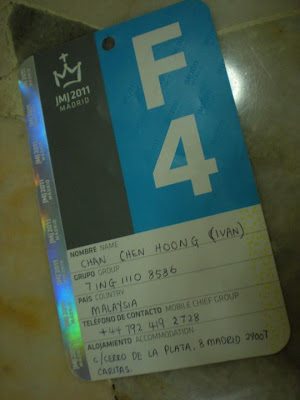 So there we were, unloading our bags and managed to chat a few with our liaison, Esteban who was a WYD volunteer. A Madrid local, he was very friendly towards us and tried to speak to us in English, which was a challenge to him but in return we tried using our broken Spanish and communicated. It was kind of hilarious us trying to speak Spanish, oh well.

We had lunch at the local Burger King with a bunch of new found friends from Belgium. BK was a relief from the hot sun (can't believe as a true blue Malaysian, we were complaining about the heat, oh wait, that is being Malaysian anyway, no offense :).

Again, language barrier but we didn't let that stop us from introducing ourselves and where we came from. After lunch, we went to one of the WYD stations in town and collected our WYD pack, which includes our meal vouchers, train ticket and other devotees kit (such as rosary, mini bible,cross etc).

After unloading some of our items back at Pacifico, we then made it to Plaza de Cibeles, one of Madrid's most iconic places for the Opening Mass. Getting there, alongside with us, are thousands of other participants, which outnumbered the locals in Madrid easily. I'm not a huge fan of being sardine packed in crowds, and a little advice here, be 100% aware of your belongings when you're in one. 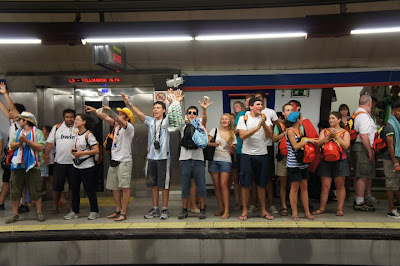 At last, we managed to reach Plaza de Cibeles, braving through the massive crowds, all devotees ready for the Mass. One thing that we have to do here, is respect, and show the respect to the people for being pious as they are. So that was what I did, I actually went through the whole mass with Larry and thousands of others, presided over by the archbishop of Madrid and concelebrated by the partcipating bishops and priests for the WYD.

As to how hard it get in Plaza de Cibeles, it was equally challenging to get out of the place as the crowd dispersed at the same time, all heading to the nearest place for dinner and going home. It was insane, one of the memorable experience I never expected in Madrid.

It was dark by the time we were done getting our bites, so we headed back to Pacifico and called it a night. And this is just day 1, we wondered what adventures was in stored for us the following days.

Ivan's Tips
1) Learn as many basic Spanish words as you can as not many of them can speak English
2) It's more polite if you asked anyone if they speak English before actually asking them the question, that way they will feel more open talking to you.
3) The decimal points for values are replaced by commas. E.g. RM1.00 here would look like RM1,00 over there.
4) WYD is also widely recognized as JMJ over the event, which stands for Jesus, Mary and Joseph. Jornada Mundial da Juventude (Jornada = Journey, Mundial = World Wide, da Juventude = of the youth)
#Thanks Felipe for the info correction :)
Posted by Unknown at 2:44 PM