It was one of those days, heading to work, tends to work, and back from work when somewhere in between, on February 27,  I received an email from AirAsia X, and we've won air tickets, accommodations and rental car to New Zealand. New Zealand. Gosh! Totally unexpected, and I am still counting my blessings.

Who are my travel mates? Both of them (Lemuel and Fatin) I've known from extensive involvement in participating contests, would they be my first choice in traveling with? Pretty unlikely but we've developed a crazy relationship along the way. And I'm glad that I traveled with them.
One month of intensive planning, and voila, we're off to Christchurch via Air Asia X. The flight was 11.35pm, 9th of April 2012 and it took us around 9 hours. Daunting flight, luckily meals were covered for as well :)

Fast forward 9 hours ahead, we've arrived at Christchurch, New Zealand, 1.50pm, on the 10th of April 2012 (New Zealand is 4 hours ahead of Malaysia). Immigration in NZ is pretty strict as well, and they're particularly against bringing honey products over there. Luckily we didn't stash any honey-like food in our possession at that time. After clearing immigration, we headed to Europcar, the car rental service, which was covered for except for fuel consumption. Spoiler alert, our 6 days trips was heavily self driven, we've traveled for 1473km  and it costs us approximately $354. Youch!

The weather in NZ was between 7-17 degrees Celsius, pretty cool breeze for autumn over there. Our destination for the day was Lake Tekapo, which was 3 hours away from the airport. One thing about driving in New Zealand's South Island, the road is pretty straight forward, making driving there less complicated. Though we had to rent GPS throughout our stints there, for safety :)

When we arrived Peppers Bluewater Resort, Lake Tekapo, it was well close to 7pm already, and sunset was around 6.30-ish, we're missing in terms of daytime hours. The mountain view villa there costs approximately $270 per night, and I must say, the resort room we got can fit up to 4 people. Double storey, equipped with kitchen, TV, and all. Plus the bathroom is well heated. I am missing it already.

Driving at night at Tekapo could be quite dangerous as the roads weren't well illuminated. We wanted to visit Mt.John Observatories that night for star gazing but apparently they were overbooked that night. Not to dampen our night, we found ourselves in a pizza place called Pepe's. NZ has this law against selling alcohol to minors (under 18) and they have the right to check our ID to verify our age. And that was exactly what they did. It was a compliment, we all looked young. LOL. That and minus the fact we have a Muslim girl with us.

No, no alcohol was consumed anyway but we did had a nice pizza meal for under $30.

We called it a night quite early since we were deprived of Internet.

Day 2, 11th of April 2012. We drove down to the awesome Church of Good Shepard, and was mesmerized by the awesomeness of Lake Tekapo. If you must know, Lake Tekapo is the second largest lake in the South Island, and the church was built in 1935 :)

After the morning spent camwhoring, we checked out Peppers after breakfast, with a heavy heart since this place is pretty swag for retreats and relaxation. We are, open for adventure though to Queenstown, our next destination.

And so, our 3 hours journey began leaving from Lake Tekapo. We were supposed to stop by Lake Pukaki, yes, awesome name, Lake Pukaki, for a clearer view of Mt.Cook but it was so misty that we went down just to chill. Literally. Made us wonder is the weather is going to continue deter us from our planned activities?

Anyhow, leaving Lake Pukaki,  we continued to our destination to Queenstown, and detoured to Mount.Cook/ Aoraki because we were that determined to see Mount.Cook. Yes we were.
Making our way to the resort area over there, the Hermitage and Sir.Edmund Hillary Alpine Center, we were STILL unable to see Mt.Cook, because it was too misty. Nice weather but hindered vision T_T

We continued our journey, along Twizel, Omarama, Lindis Pass and to Cromwell. Well, according to our research, Cromwell is hailed as the Fruit Bowl of the South, and we're expecting fruits. Lots of fruits.

We stopped by Mrs. Jones fruit orchard, and we were impressed by the garden next to the fruit stall, operated by, whom we assume, Mrs.Jones.

It was almost 4pm and we were worried if we're ever going to make it to Queenstown before dawn. So we made a move and yet again, made another detour. This time to the famed Arrowtown, a town where gold mining was used to be town's major activity. But now Arrowtown is like a dainty town, with western cowboy architecture buildings. Cute area to hang out at. 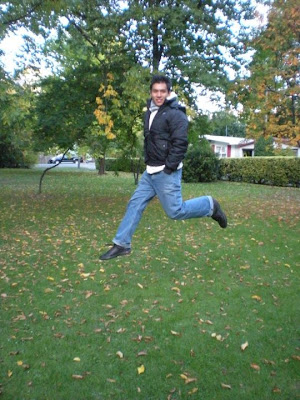 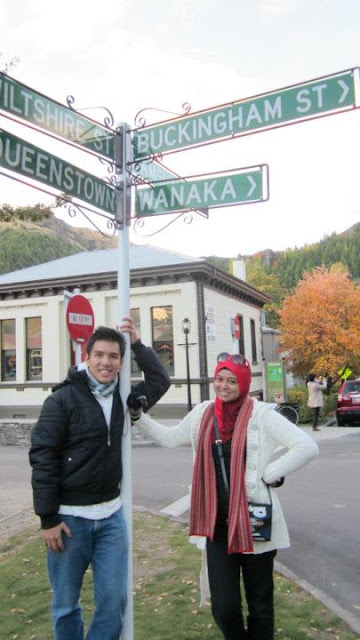 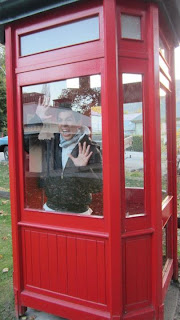 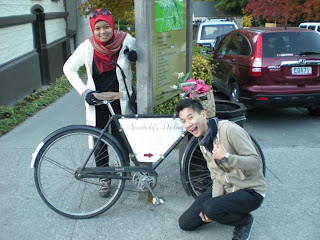 After spending some time in Arrowtown, we finally continued our journey, this time, no stop all the way to Queenstown. We passed by Kawarau as well, where Fatin and I were knocking ourselves on our head because we purchased a slot for bungy jumping. Yes, jumping. Next posts though I'll cover that. We checked in at Copthorne Resort Lakefront, and ventured around Queenstown's night life. Queenstown, I must say, like its name suggests, is fit for a Queen. I mean, this town is nothing short of excitement, the lake view itself can take your breath away. It is completely different from Tekapo as it is more populated here.

For dinner we bought ourselves the famous Fergburger, while Fatin opted for a light dinner instead. The burger speaks for itself. It is huge, the patty is tender and the line for buying the burger is crazy long!

Next posts, the next 2 days at Queenstown - of Milford Sound, Bungy Jump and Wine Tasting!

Also, check out Fatin's post on her adventure in NZ, as well as another friend, Devi who was in NZ the same time with us, but different company. Till then, Kia Ora people!