Thanks to Double Tree by Hilton, Kuala Lumpur, a selected few fans are given the first opportunity for a food review for Cellar Door's new British Pub Food Menu. We were greeted by Double Tree's Facebook Page admins Nisa and Cindy and were seated with a welcome drink. Chef Andy Blundy, who is spearheading the new menu, gave us the opening speech and welcomed us to the introductory menu by the Cellar Door. Good ol' British Pub food are hard to find in Kuala Lumpur, and lucky for us now, we don't have to search too far already. 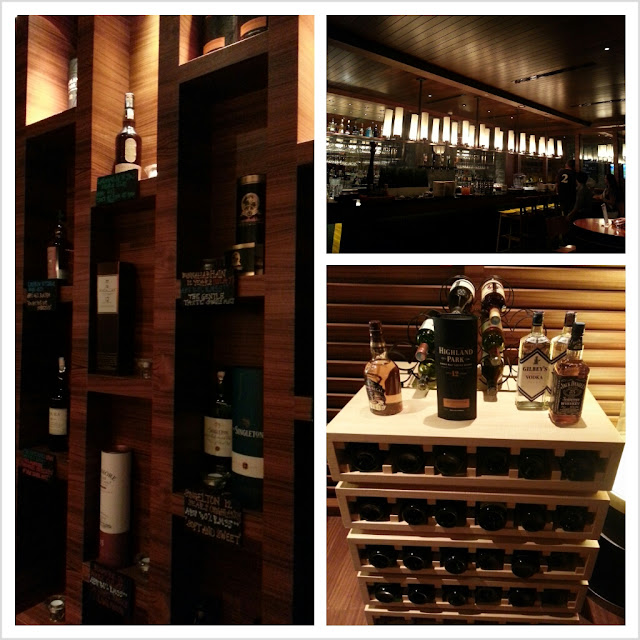 Each guests were given a review card, in which we were supposed to rate the dishes from 1 to 5 stars, 5 being the most satisfactory rating. Among the guests were Julien and Sara Wilkinson, expats, Mabelle, Victor, and Yee Pee (Facebook friends) and another familiar face I met during my previous event with Marina Mahathir, Vanthini. We were also joined by Cindy and Nisa for the dinner.

First up, appetizers! The appetizers that were served included the Deviled Whitebait with Thai Ketchup and Tartar Sauce and Pint of Prawns with Lemon, Chipotle Mayonnaise, Brown Bread and Butter. Whitebait is basically a collective term for the immature fry of fish. The deviled whitebait is crisp, and seasoned well, and almost tasted like an Indian cuisine due to the spices used. The pint of prawns, fresh and light, another great way to get your palettes started. Dipping the prawns in the chipotle mayonnaise is optional, but highly recommended.


The main course never failed to impress, highlighting the best and most iconic British dish - Fish and Chips with homemade Tartar sauce and Pea Puree. The batter was seasoned and fried to perfection. The fish inside remained moist and tender, reminiscing the fish and chips I had in London 2 years back. It was served with classic favourites, the mushy peas (pureed) and tartar sauce (an absolute complement to the fish and chips). Also, we were given vinegar to accompany the fish and chips, another classic way of having them (kind of tried that the first time in London as well).

We were also served with the Homemade Sausage and Mash with Onion Gravy. The sausage is made from a medley of lamb and chicken to mimic the texture of pork, but being a Halal restaurant (Chef Blundy admitted, he almost gotten himself into trouble when the manager specifically mentioned that no pork can be used), the medley would be the next best thing. I personally would like more gravy with my bangers, but that's just me :) 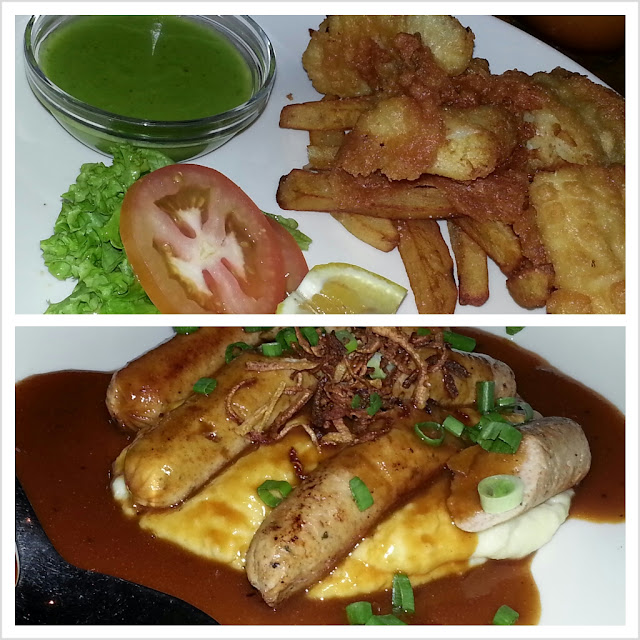 The next few dishes lined up were Chicken Kiev with Roasted Garlic Butter served with triple cooked chips and salad, and the chef favourite, The Cottage Pie. The Chicken Kiev, as written on the comment card was supposed to be oozing with the roasted garlic butter but it came out too dry, kiev is generally a very hard dish to tackle, I've yet to try a great kiev as of yet. I did not sample the cottage pie since the main protein used in this dish is beef, but the vegetable servings aside it taste alright for me. Sara joked that Julien will gladly help with my serving because he is that thoughtful, :)

The Tikka Masala was ordered as a special request (off the review menu) since it has built its reputation as a true British national dish, despite its unknown origin. The tikka masala is rich and creamy, but I would prefer it to be spicier. I can understand the mild spiciness though, it's not supposed to shock anyone's palette that way, rather it was meant to savour the aromatic spice blend in the masala dish. The Rarebit was a throw off for me, thinking that it actually contained 'rabbits'. I obliviously asked the Chef what rabbit was used. Rarebits are actually made with a savoury sauce of melted cheese (and various other ingredients), served hot, after being poured over slices (or other pieces) of toasted bread. This dish is said to originate from the 18th Century Great Britain, qualifying it to be another classic British dish. Well, there is something new to learn everyday, no? :)

No full course dinner is complete without desserts. The served desserts included Black Forest Gateaux with Morello Cherries and Kirsch, Warm Apple Crumble Pie with Vanilla Sauce, Sticky Toffee Pudding with Caramel Sauce and my personal favorite, the Treacle tart. The Gateaux, albeit not exactly British per se, is a decent looking cake, garnished with the cherries around it. The toffee pudding didn't really blow my socks, but the apple crumble pie and treacle tart were superstar for me. I love apple crumble pie. I find it hard to get a good, warm, slice of apple pie around. The treacle tart, gives a very Ikea-cookie-inspired flavour, cinnamon and ginger gave a prominent whiff to it. Thumbs up for the tart! Dessert Queen, Vanthini (not self proclaimed, I gave her that title since she loves baking), approved the tart and the pie as well!

After the desserts, we were tasked to draw our favourite dish and name our favourite dish. Chef Blundy selected 3 of his favourite entries, and the winners were rewarded with an additional gift to the goodie bag that each guests were given. Of course, each of us went home with the delicious, famous Double Tree Cookie as well!

I would like to extend my gratitude once again to Double Tree and Cellar Door for the amazing dinner, my official pilot food review and the company of great new friends, great hosts Nisa and Cindy on behalf of Double Tree and the excellent Chef Andy Blundy. Rest assured, I'll be back for more, especially for the Fish and Chips :) Check out more photos from the Double Tree Facebook page, like the page if you haven't!

Email ThisBlogThis!Share to TwitterShare to FacebookShare to Pinterest
Labels: Eventmania