In line with the spirit of Raya, where we ask for forgiveness for all the wrong doings we might have done, I... ah what the heck, actually I was spring cleaning my email today when I bumped across this old email from Cadbury Malaysia.

You see, Cadbury Malaysia organized a contest via Facebook, which required contestants to include creative captions to the weekly picture given in the Facebook application. Each captions will be judged by its creativity and votes.

The problem with "votes" are, phantom voters are abundant in the contest world. Phantom voters contributes to fraudulent vote that affects the outcome of the contest dearly, most votes = winner. Unfortunately, many contest organizers are still using this mechanism to judge contests, which is the most convenient method to them and to them, the most transparent way to dictate the winner.

Like many other voting required events, it doesn't matter how the votes come in (dead, ineligible, bribed elactorates among the many examples), as long the organizers are ignorant of the vote source, for all they care, they have a winner. Voila.

I appreciate that certain organizers took the effort to monitor and diminish the fraudulent votes, but my question is, to what extend that they do that? What is the clear definition of fraudulent vote. And in line with the STOP 114A Act hype, if the votes that came from suspicious source goes to my way, am I the one who is fraudulent?

Back to my initial story, I was searching back for the Cadbury Commendables contest, and the 1st thing that popped out was my Facebook comments back in 2011.

I've also saved an email conversation between myself and Cadbury Commendable via Gmail. 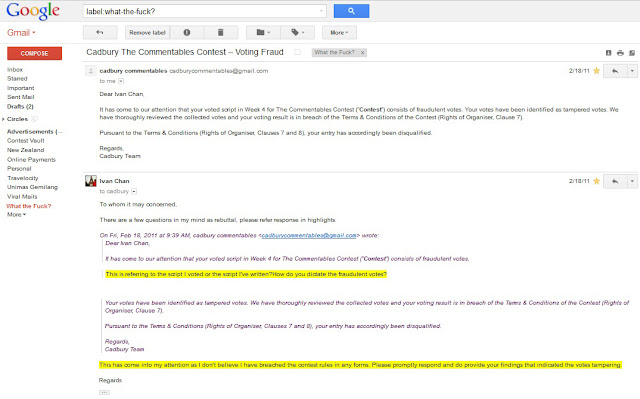 At least there was a reply from the organizer's end. In the email, basically they claimed that I have cheated in the game and thus resulted in my disqualification. Nobody likes to be accused of committing something that they have not done.

Cadbury Commendables had claimed that I have breached the contest rules and regulation, which I rebutted and demanded for an explanation (and proofs if I have indeed cheated). They replied with a generic response,

The judges of the contest used stringent criteria at every stage to evaluate the entries. Not only were the comments evaluated, the participants and those who voted had to undergo identification verification. Unfortunately, many of those who voted for your comment did not pass the verification test from research made on the personal information submitted.  The list of winners has now been announced and is deemed final.

It gets better. I found out that a number of other participants were disqualified as well and demanded an explanation via FB, mainly those who were experiencing the same accusation. What is this "verification test from research made" you may ask? I never did find out.

To be fair, Cadbury Malaysia did offer a chance to go to their headquarters to review the evidence. For me, that was the last straw for me. It could be so much more convenient to publish the evidence online, thus could potentially deters cheaters in future contests, or email me the evidence if they have the integrity to do that. It's a waste of time, since they have already decided on the winner. Not worth the trip there as well I must say.

Unfortunately, it never did materialized. And I found the following Facebook status update from Cadbury Malaysia page not too long after. 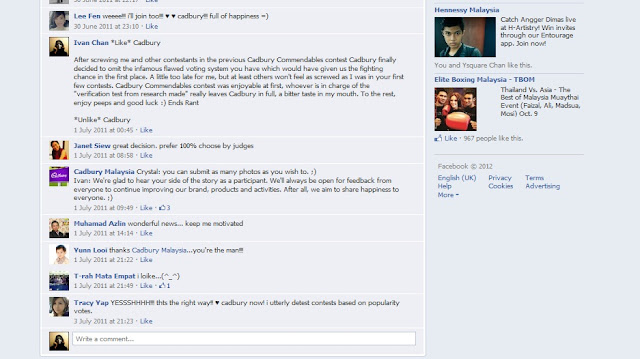 Well, after fulling ranting with sarcasm, I was replied with another generic kind of response. But maybe I was expecting too much, but really, Sheldon Cooper detects sarcasm better than them.


Ivan: We're glad to hear your side of the story as a participant. We'll always be open for feedback from everyone to continue improving our brand, products and activities. After all, we aim to share happiness to everyone. ;)

Feedback given, action taken,  but what to who's expense? *puts smiley face at the end to make this less tension :)*

Voting contests are very transparent, I must agree with that. But there is only so much time where genuine winners are rewarded. Take this scenario.

What is the most romantic thing in the world? The most "like"/"vote" wins.
Mr. Playfair - The wind that blows my broken heart away and brings my love's breeze through.

Is the integrity of the contest justified? From the contest organizer's perspective, WHO CARES? She gotten 18961 votes, that's like a HUGE feat!


I never claimed that my entries are always the winning material, but it pains me to find out that the less admirable materials won over mine, all the time. As much as I can avoid, I will avoid voting contests.

Does organizers like this hampers my spirit? Heck YES, but only temporary.
We forgive, never forget, then write blog entries like this.

PS: Cadbury Malaysia sure do know how to rub on people. Check the screen capture below from another email after that

Cadbury never did reply to my email after that. LOL
Posted by Unknown at 8:45 PM