A continuation to the 30 things to do in Hanoi (if you have been following so far here).

15. Eating on the Streets
Low stools, along the streets, with authentic stir fries or soup noodles, and beer, eating on the streets must be one of things to try in Hanoi, to feel like a local and definitely an experience. 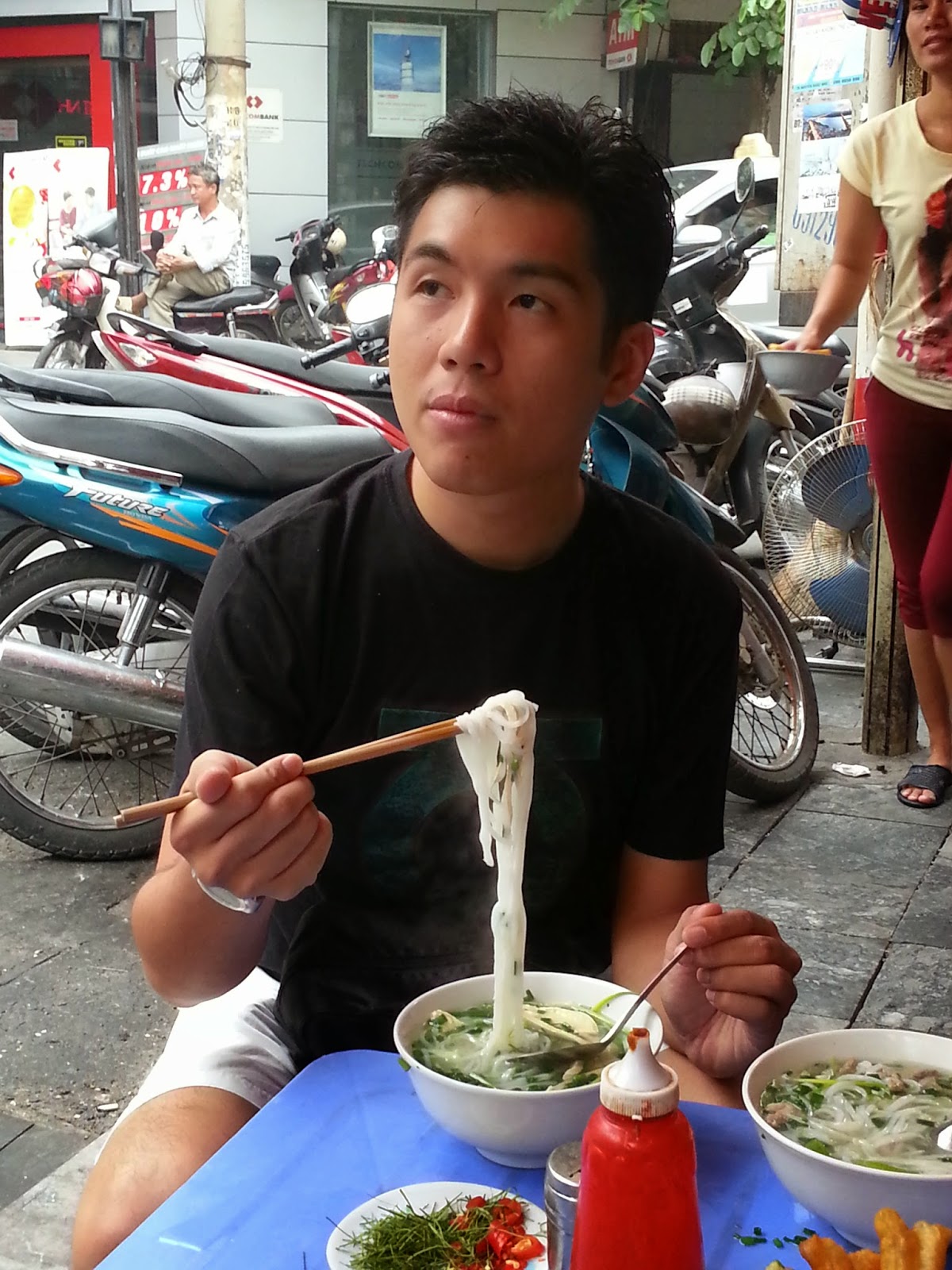 14. Dong Xuan and the Night Markets
Basically Dong Xuan is worth the visit, if you have already mastered the skills of haggling and if you are into souvenir hunting. Located on Dong Xuan street, expect massive crowd (and beware of your belongings of course) while you are here. The Old Quarters comes to live during the weekend nights, so if you have missed Dong Xuan, the roads along Hang Ngang and Dong Xuan should be sufficient non the less.

13. Long Biên Bridge
The Long Biên Bridge connects two districts, Hoan Kiem and Long Bien. Originally called Paul Doumer Bridge, this historic cantilever bridge across the Red River is probably one of the most photographed bridge aside from the Huc Bridge in Hanoi. We did spot wedding couples taking their wedding photos here.

12. Trung Nguyên Coffee
Proclaimed as World's Number 1 coffee, Trung Nguyên is the largest domestic coffee brand within Vietnam, and exports its products to more than 60 countries. Do sample their best seller, the Legendee alongside with other creative blends of theirs. Coffee drips, Vietnamese style is one of Trung Nguyên's signature way to enjoy their coffee too. 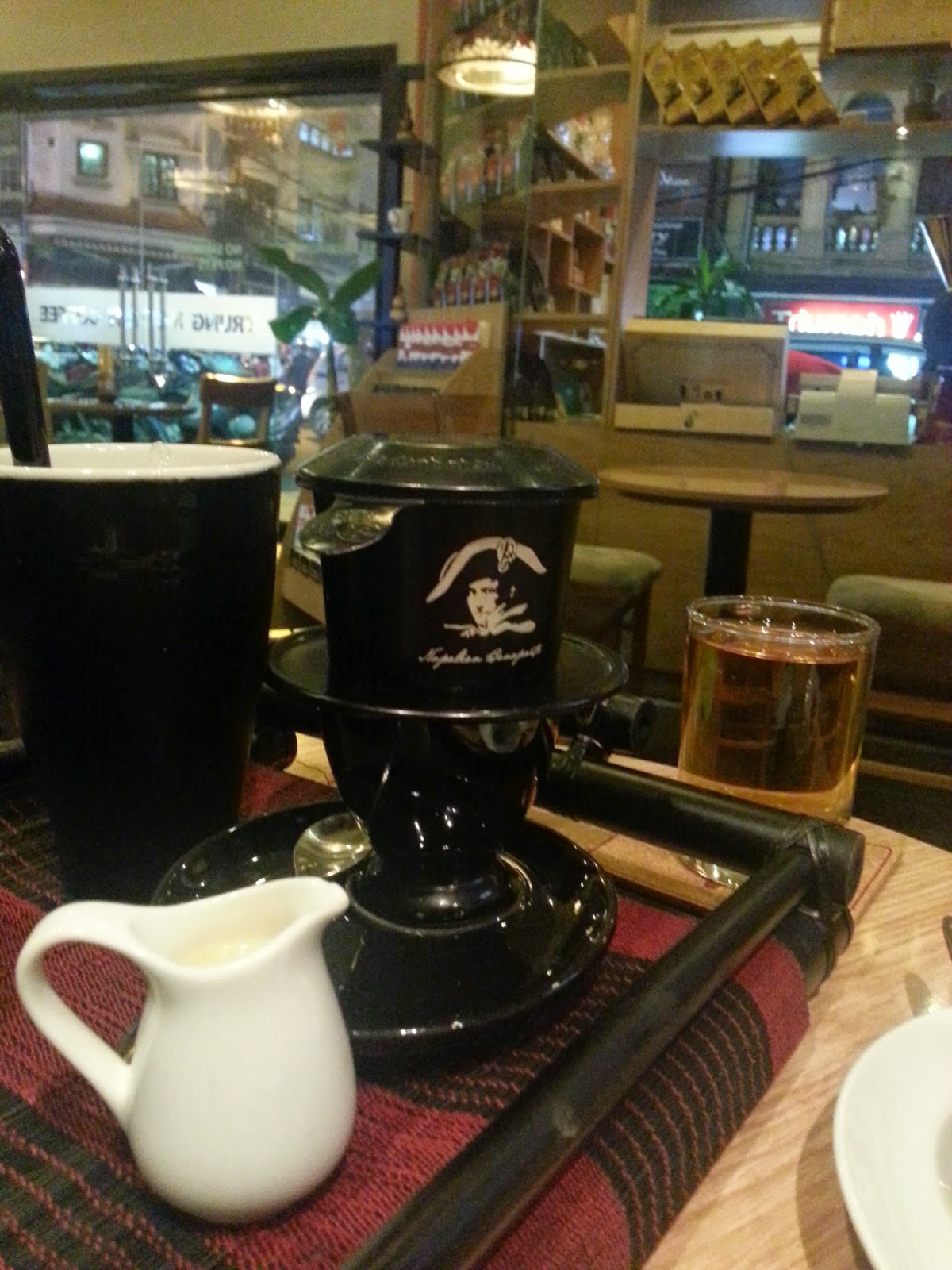 11. Remembering Hồ Chí Minh - The Mausoleum and the Museum
Located in the center of Ba Dinh Square lies the Mausoleum of  Hồ Chí Minh, the former Vietnamese leader and Chairman of the Communist Party of Vietnam. Specific timing for the visit (and based on what we've read online, the queuing line is a horror) and there are heaps of rules to follow including very decent wears and constrained gestures must be adhered there. Skip-able unless if  Hồ Chí Minh inspires you heaps to visit, otherwise you can consider the  Hồ Chí Minh Museum, not too far away from it. Constructed in the 90's, this museum is often regarded by some as a propaganda tool of the Vietnamese Communist regime. Basically, you can learn more on Hồ Chí Minh here (again, if you wish too of course).

10. One Pillar Pagoda
This Buddhist temple is a stone throw from the Hồ Chí Minh Museum, next to the Perfume Temple. The Perfume Temple seems to be under renovation when we were there. Built from woods and supported by a single stone pillar, the pagoda is designed to resemble a lotus blossom (Buddhist symbol of purity). A survivor of its own virtues, it was destroyed by the French in 1954 and it was rebuilt after the French's withdrawal. The pagoda, to me looks more like a small shrine, rather then a majestic pagoda I thought I would see.

9. Presidential Palace and Hồ Chí Minh's House.
Built to house the French Governer- General of Indochina in the 1900's, this 'palace' would be a perfect European architecture masquerade, had it not been for the mango trees that are grown in its vicinity. Story goes that when Hồ Chí Minh took over Northern Vietnam, he declined to stay in the palace and rather the humble, stilted servant quarters behind it. The palace is strictly off limits for visitors but the stilted house and the garden area in its vicinity is open for strolls and visits. Remember to get the tickets (Around VND 25000) before entering as it can be tricky finding the exact entrance it and you may enter from the exit (like what we did).

8. Cafe Giang Egg Coffee
Mushrooming cafes are a common sight in Nguyen Huu Huan street but when you are here, you have got to try Cafe Giang's Egg Coffee. One of Hanoi's hidden gem, the ca phe trung (egg coffee) is a simple concoction of Vietnamese coffee powder, condensed milk and egg yolk (eggs were used to substitute milk as it used to be scarce in Vietnam).The cup is placed on hot water to maintain its temperature and one of Cafe Giang's greatest kept secret, is the perfect composition of ingredients to prevent it from being too rich in flavor and keeping the integrity of the coffee scent and flavour in it. Just look for number 39 in Nguyen Huu Huan Street for this unique coffee. We came here 3 nights out of our 4 nights in Hanoi itself, speaking of obsession!

7. West Lake and Trấn Quốc Pagoda
Aside from the Hoen Kiem Lake, the West Lake is Hanoi's most visited recreational area. Booming properties prices are said in this area, where hotels and restaurants are common sights. The Trấn Quốc Pagoda in Hanoi is the oldest pagoda in the city (constructed in the sixth century). This picturesque pagoda (well, more so than the One Pillar Pagoda) and Buddhist temple is a definite attraction here. 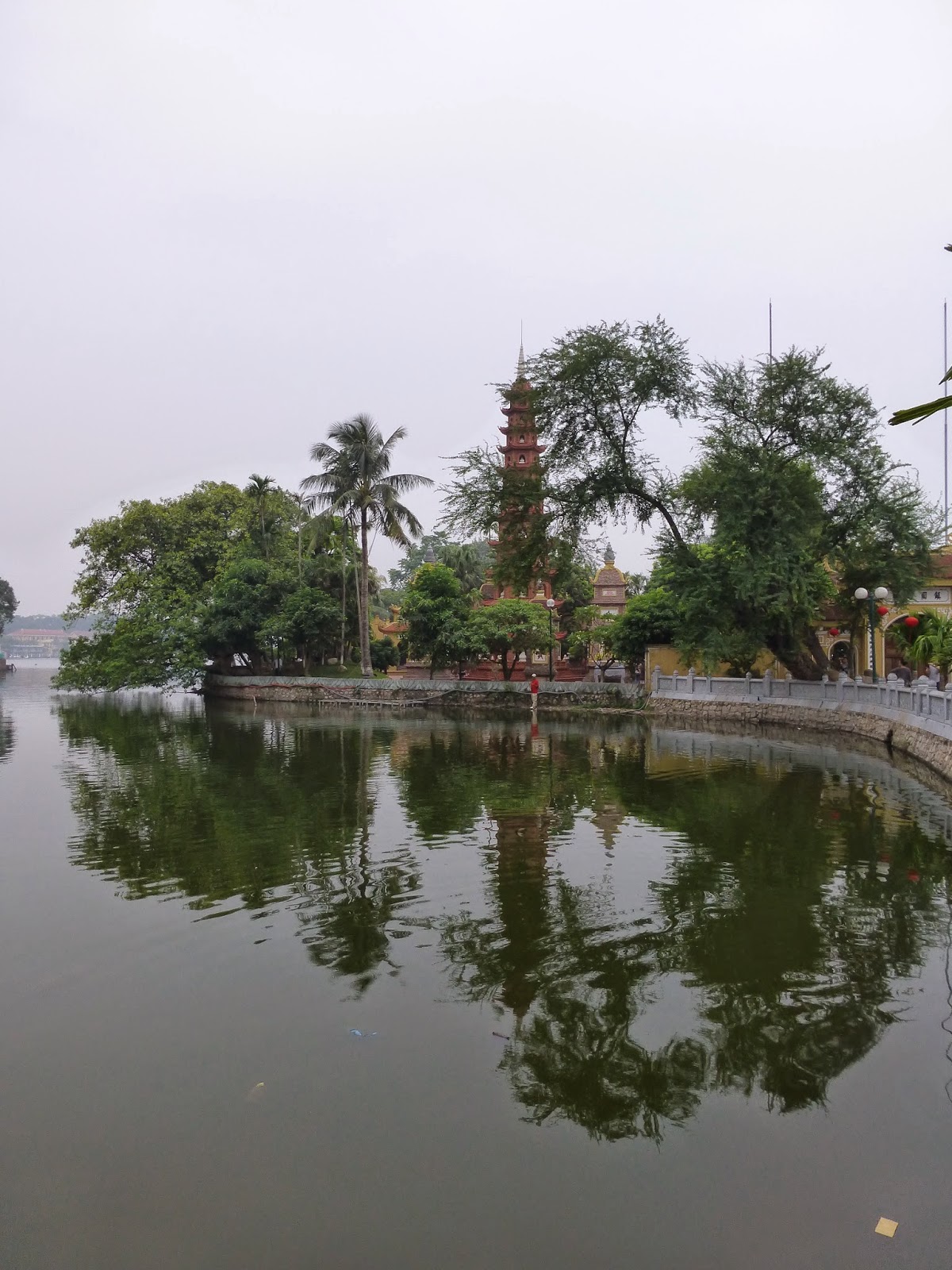 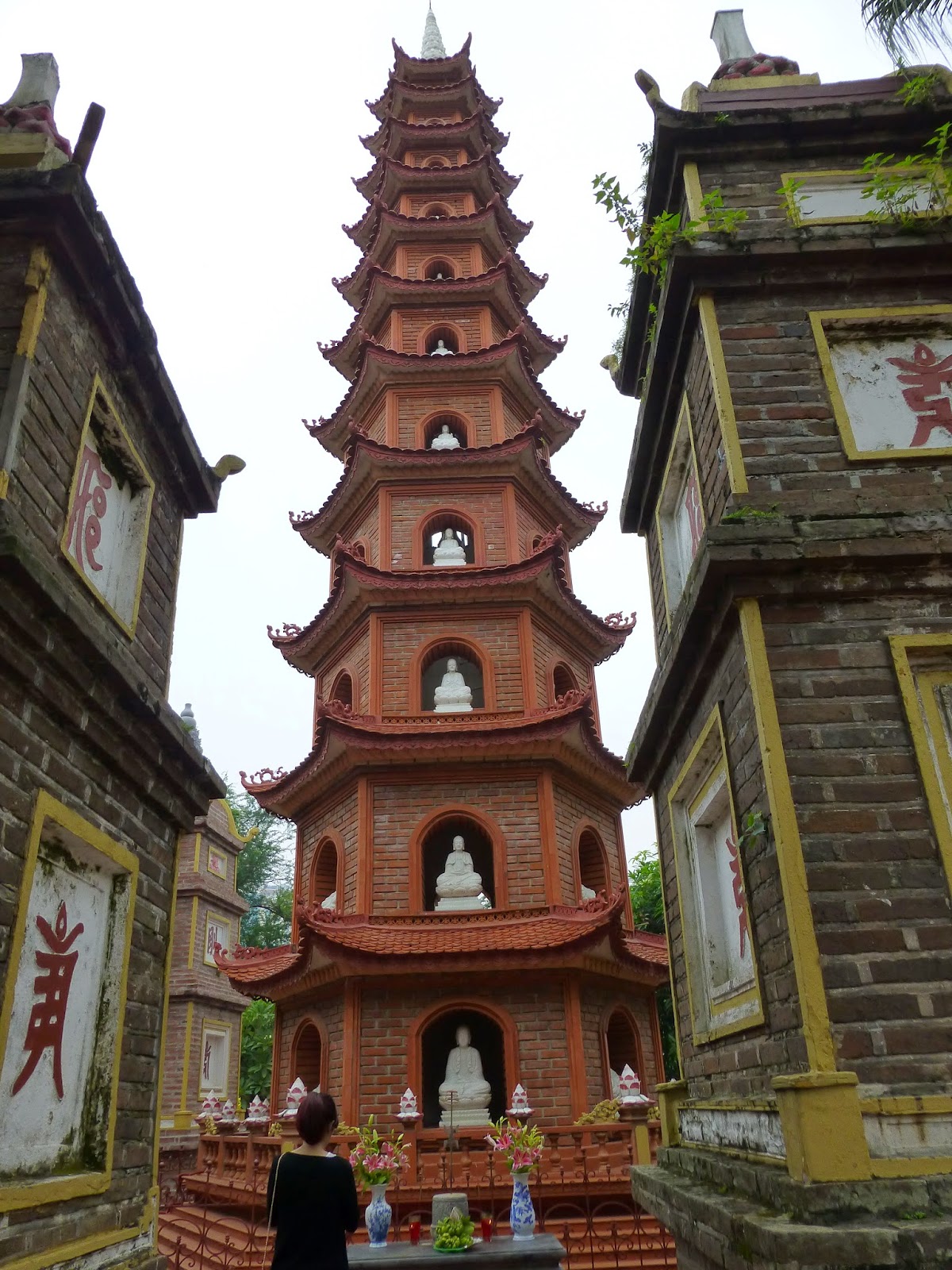 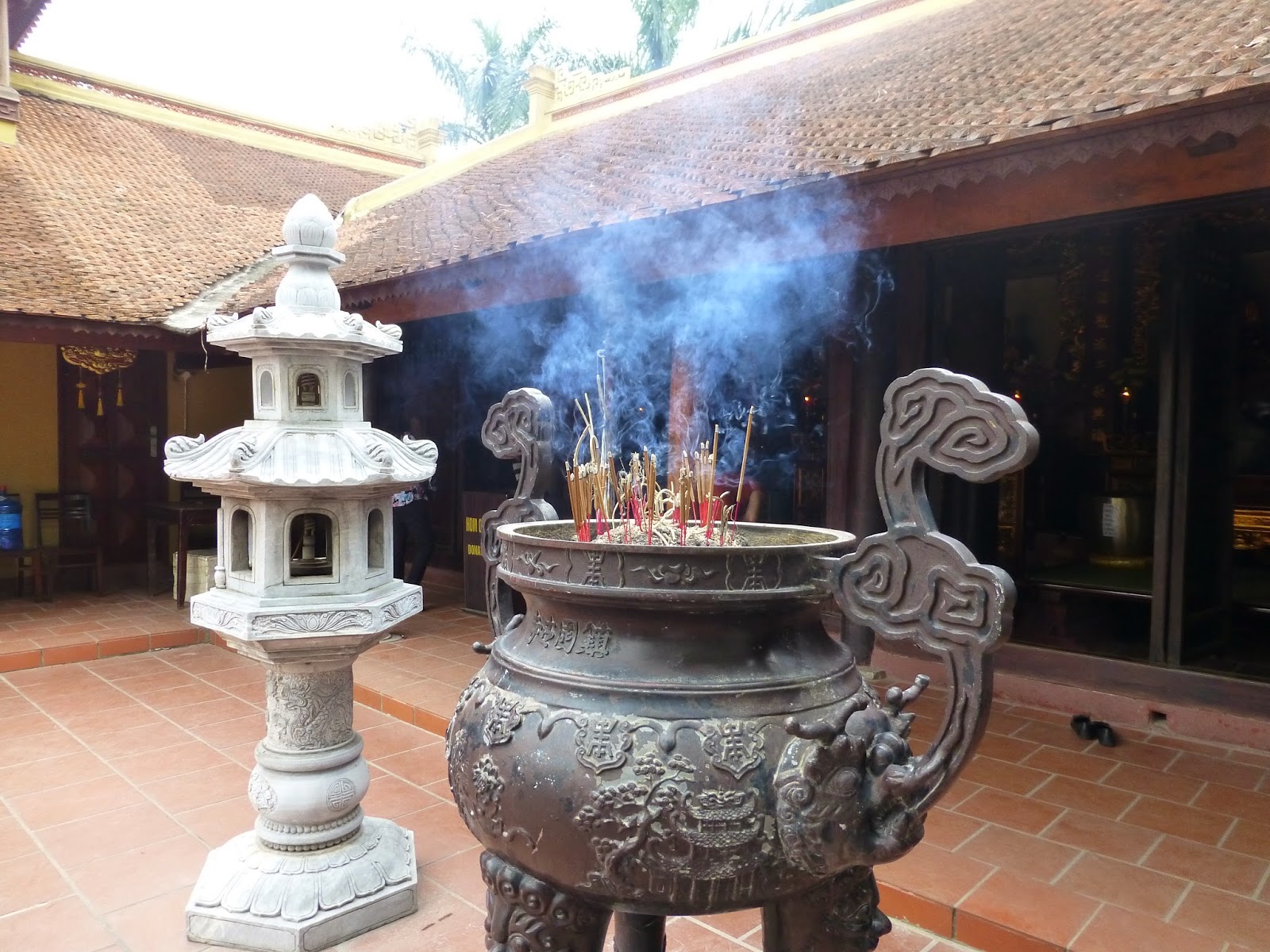 6. Xoi Yen Sticky Rice
If you find yourself hungry in the Old Quarters, make your way to Nguyen Huu Huan street for their sticky rice. Accompanied with a layer of green beans, fried onions/shallots and toppings like BBQ pork and Chinese sausage. You will find yourself dining on short stools and this is one filling dinner or supper that you can find in Hanoi.

5. Hoàn Kiếm Lake and the Turtle Tower.
The Hồ Hoàn Kiếm (Hoàn Kiếm Lake) is also known as 'The Lake of the Restored Sword'. Legend has it, emperor Lê Lợi was cruising on the lake when a Golden Turtle God surfaced and asked for his magic sword, 'The Heaven's Will'. Apparently this sword is some big shot weapon borrowed by the Golden Turtle God during the emperor's revolt against the Ming Dynasty, and so the history behind its name. The Turtle Tower erected on a small island near the center of lake is linked to the legend.

4. Huc Bridge, Ngọc Sơn Temple
Connecting the Jade Islet and the shore across the Hoàn Kiếm Lake is the Huc Bridge, also known as the Morning Sunlight Bridge, probably due to its vibrant red colour. Đền Ngọc Sơn, or the Ngọc Sơn Temple is dedicated to Trần Hưng Đạo, a national hero and Confucian and Taoist philosophers. Entrance fee to the temple is VND 3000 although just standing on the bridge is absolutely free!


3. Ga Nuong Suon Huong Food Stall
Located in Ly Van Phuc (and trust me, this was a challenging place to find) and infamously known as 'Chicken Street' due to its popularity from the barbecue poultry that is fired up for your taste buds on this street. You may have the barbecued meats with chili sauce and pickled vegetables but its savory bbq sauce is a standalone it self. The menu is slightly challenging, as there is no English for reference but we survived and managed to order our wings (though their English is limited but the 'captain' there would be articulate enough to understand your order). Go straight to the end of the Chicken Street, the last stalls is the most famous with the preceding stalls might not fare as well in terms of taste. Do enjoy the bbq meats with Larue beer, another local beer in Hanoi. 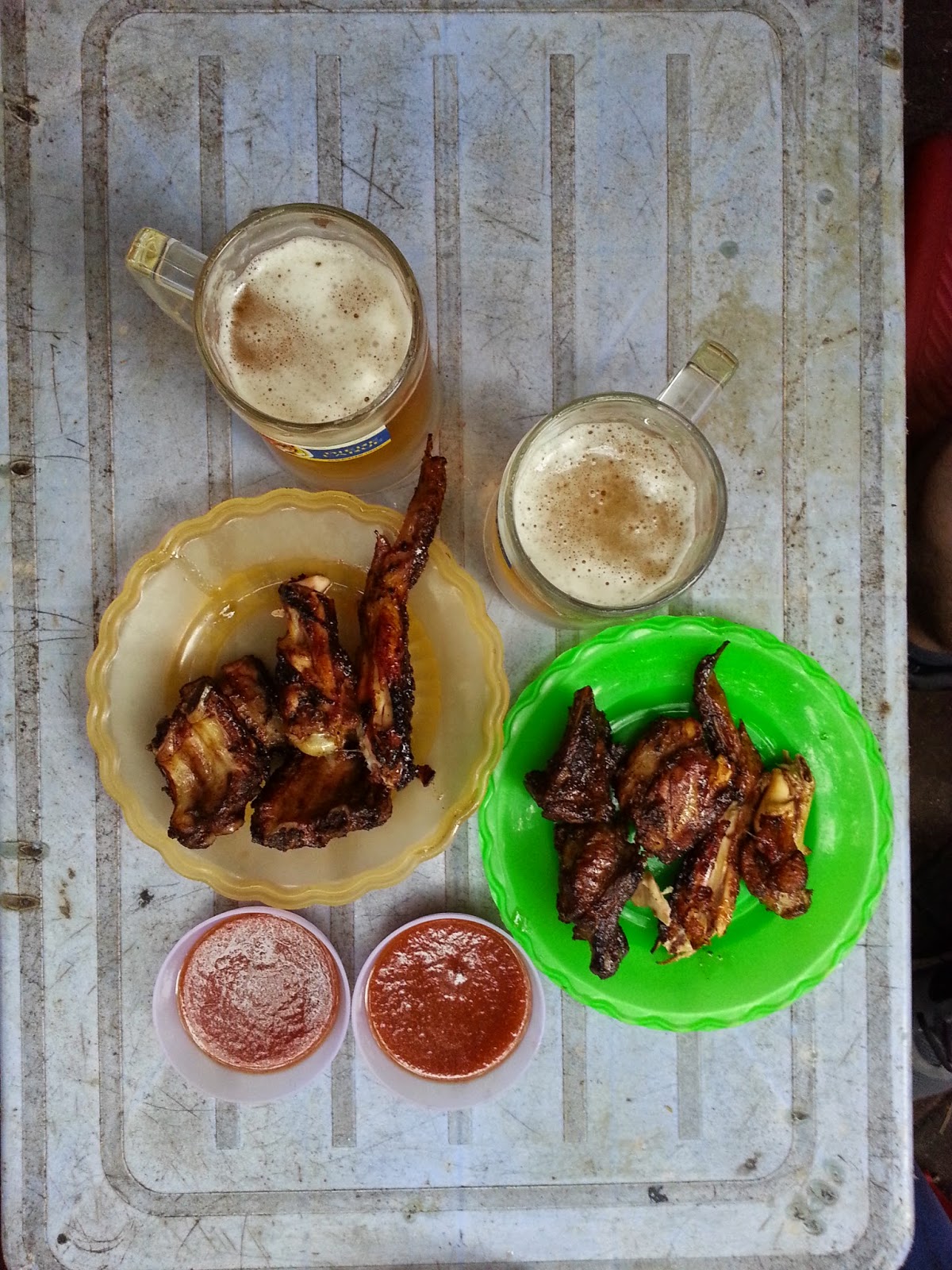 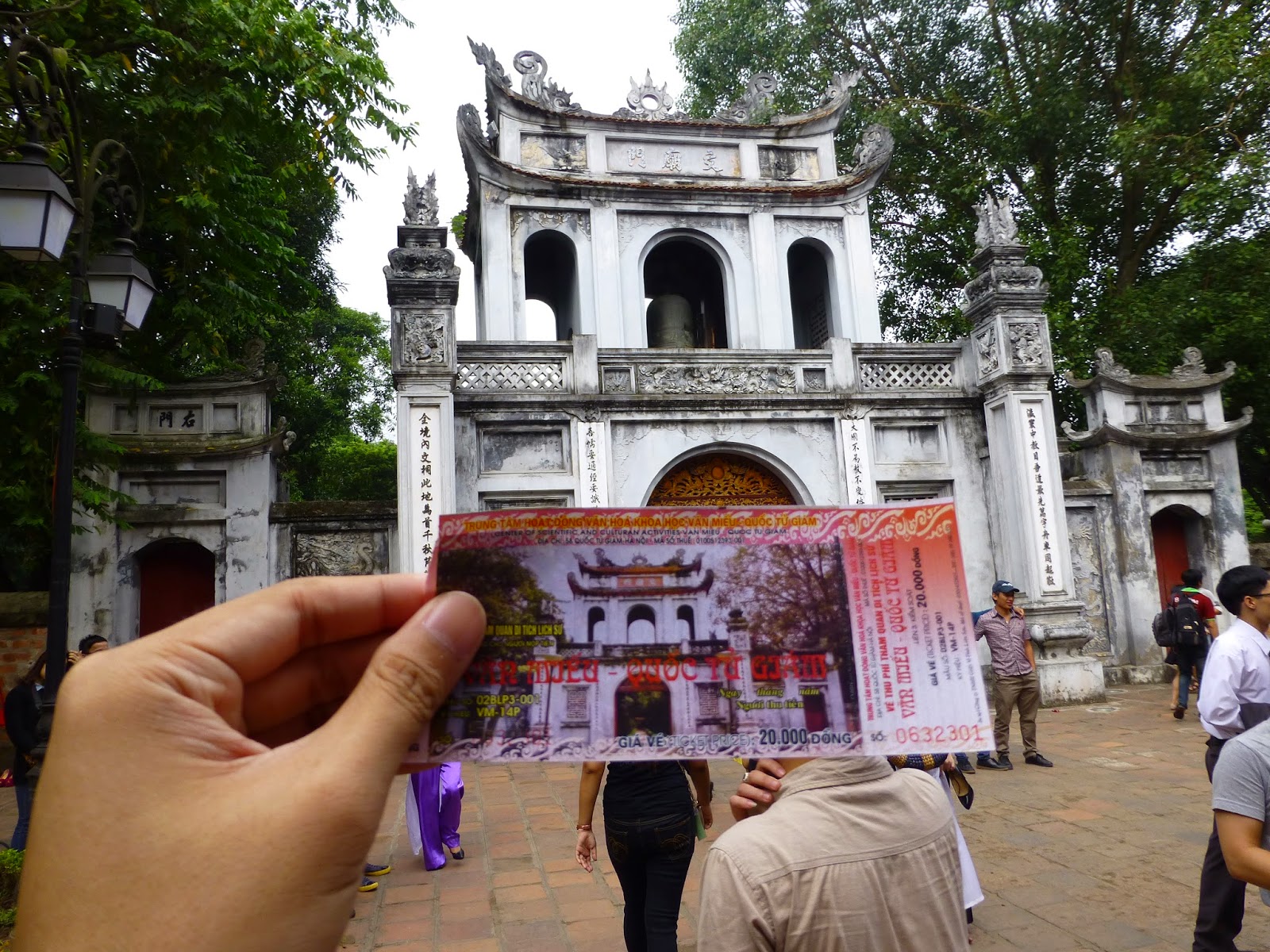 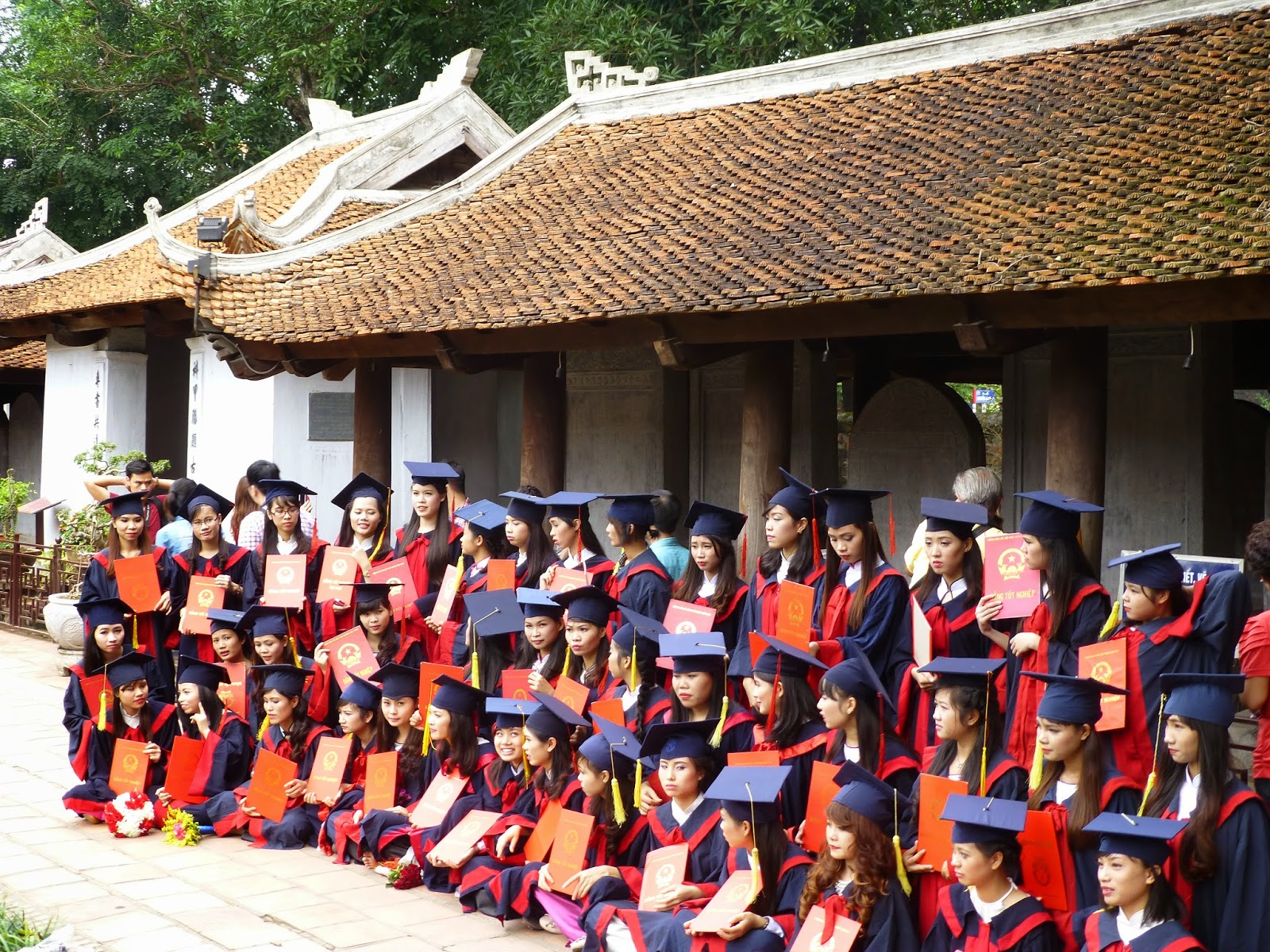 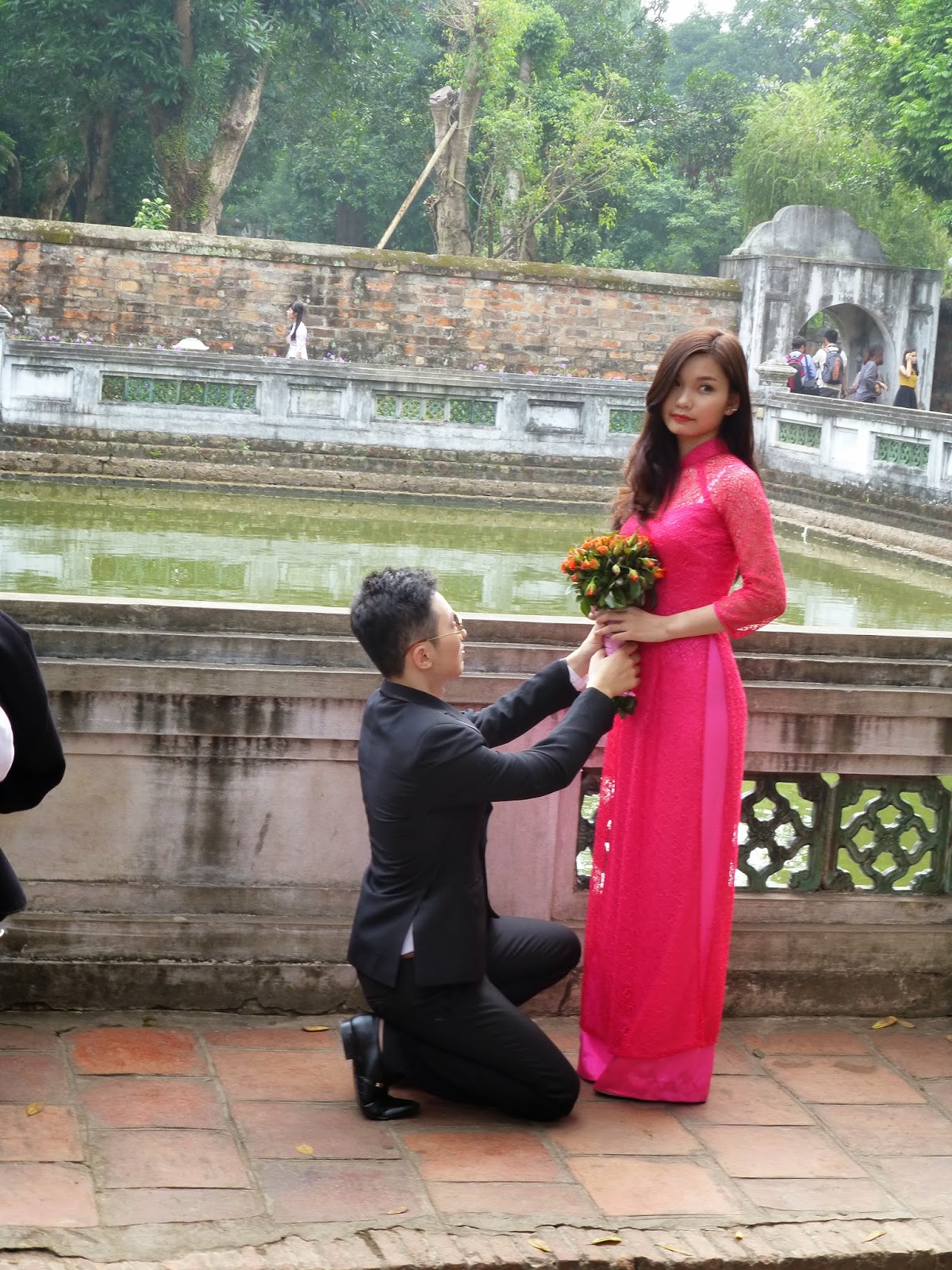 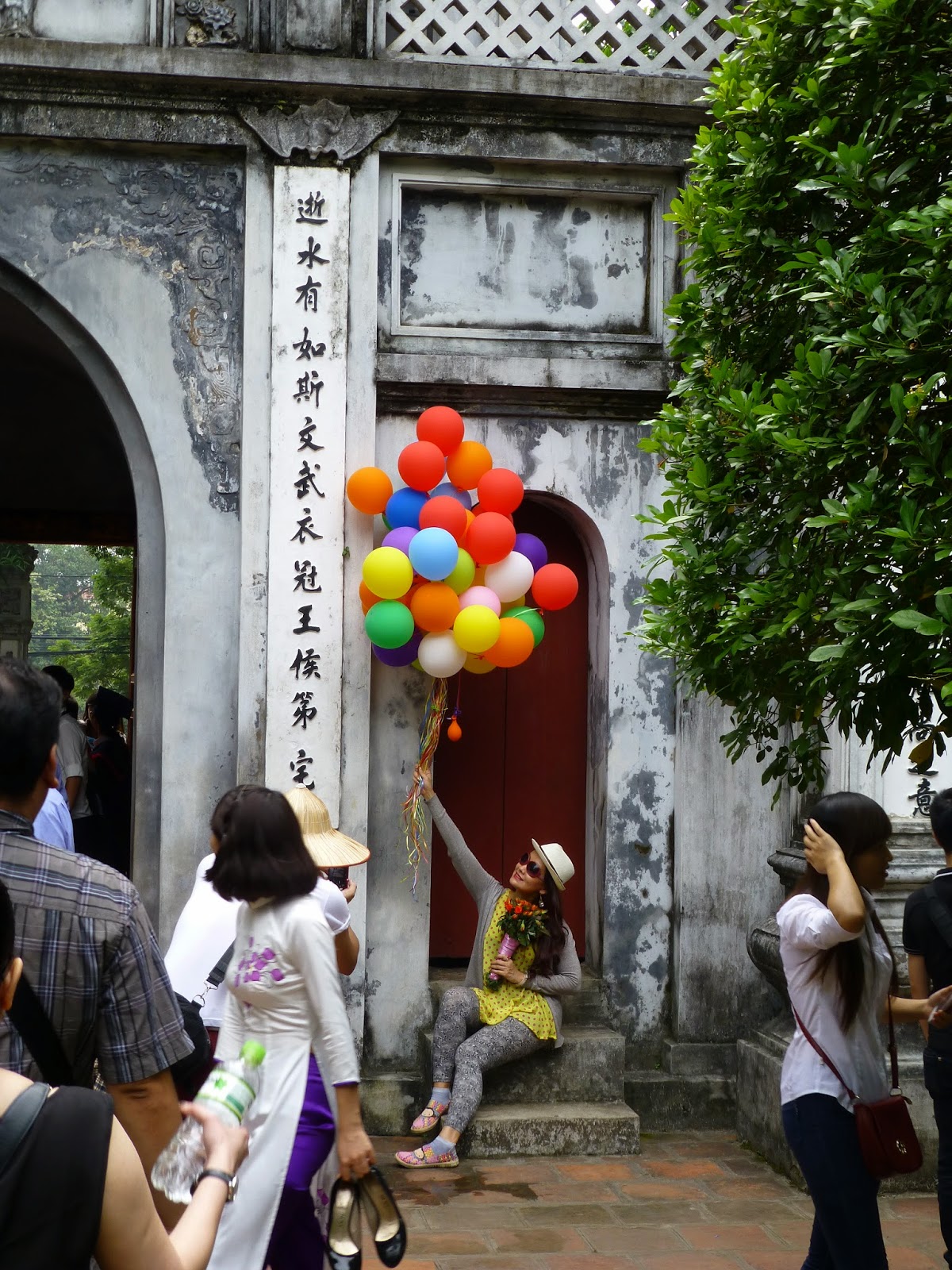 1.  Phở
Phở is Vietnam's most iconic dish This noodle soup consists of broth, linguine-shaped rice noodles called bánh phở, a few herbs, and meat. It's a popular street food served with beef (most famous) or chicken/pork. One of the stall to savour this dish is Phở Bò Gia Truyên, the lining crowd is the clearest evident that this is THE place to try the phở, though I've skipped this and opted for a neighboring place to have this hearty dish because I they only serve beef based phở.

There you have it, 30 things to do in Hanoi City itself. With some homework you can actually do more in Hanoi as it has loads to offer, reputable food scenes and cultural sightings and architectures that you can enjoy here!